New Haven (CT) firefighters issued a safety bulletin after a column collapse on the fireground last December, according to a release from New Haven Fire Fighters Local 825.

New Haven Fire Department responded to a working fire on December 20, 2015. Truck 2 and Engine 11 were operating for approximately five minutes when the front porch collapsed without any warning.

Members speculated that the columns failed to hold the load under fire conditions. The photo below shows one of the columns. Note the columns were not reinforced with a 4×4 or metal insert. Captain Chris Parker brought his concerns to the department’s Health and Safety Committee on a need to conduct preliminary testing and research on column collapse hazards. The Committee Chair Justin McCarthy brought the issue to the board for approval to fund Capt. Parker’s project. The Board fully backed this safety initiative and the Safety Committee worked with Chief of Operations Matthew Marcarelli and the Training Division to conduct testing. 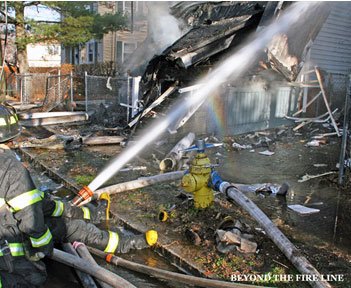 Captain Chris Parker came to the Health and Safety Committee in January to ask if the Local and Health and Safety would support and help fund tests to find out what happened on this day in December. Captain Parker had noticed that day that there was very limited fire impingement on the posts prior to collapse, which was very concerning. He had begun his research on his own and found that these new-to-the-market pillars and posts are rated for a load and need no other support other than a tack into the structure. Captain Parker found the columns for sale for less than $120 at local big box hardware stores. Captain Parker also found out that the house on Redfield had recently been remodeled by an LCI-hired contractor. What this means to us in the service is that the contractors in New Haven have already caught on and are using these columns. Below is a photo of the porch before the fire. 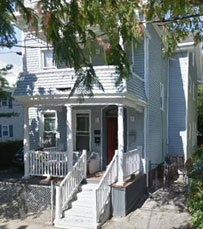 While the research was being completed, Justin McCarthy brought the plans and initial cost expectation to the members of the New Haven Firefighters Health and Safety Committee for approval to move this to the Executive Board. Quickly the Executive Board agreed that this was important and money was approved. The entire set up including cost of two columns would cost less than $500. Captain Parker was able to build a rig in his own yard, which would prove to perfectly simulate the weight of a porch roof. This would also be able hold a propane torch to provide a heat source.

On April 28, 2016, Captain Parker was joined by Assistant Chief Marcarelli, Lou Oliwa, Jeff Brabham, Justin McCarthy, President Ricci, Eric and Bill Riggott, im Carney, Kevin Reilly, and John Kendall to put this to the test. The rig was set up at the New Haven Training School and a load was simulated at approximately 1,000 lbs. The decision was made to use this amount of weight based on the total combined weight of materials used for this type/size of porch and than divided per support. The columns are rated for up to 10,000 lbs of compression force. One column would be tested at a time under load. We then introduced a heat source with one propane torch. Using a heat gun estimated heat on the column was approximately 550-750° F. At the 3:50 mark, the first column failed catastrophically without any warning sign at all, causing a full collapse. Note the column did not burn completely through before losing structural stability. A second test was conducted with the same exact load and heat source. This test had the same outcome at the 4:20 mark.

These numbers are very important for several reasons. First, the time, this is almost right when companies would be arriving, stretching or masking at the door. As we saw in the Redfield fire, if companies had committed this would have easily caused severed lines, trapped firefighters, or badly injured members from collapse. We also need to look at the temperature: 550-750° F is minimal in structure fires, where temperatures are registered in the thousands. If a window self-vents as the crews are stretching in, this would place the members in harms way. 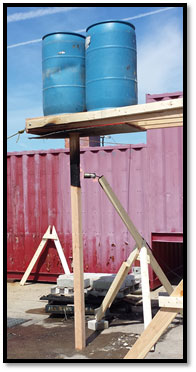 Next we utilized a wooden 4×4; the wood 4×4 did not fail, and was under direct flame impingement for more than 25 minutes.

Columns that are not reinforced with wood or metal inserts should be banned. Members should be diligent and adjust tactics accordingly.

Thanks to Doc Johnson and Brad Young for photos.