Engine company operations are based around the mission of getting water on the fire. To accomplish this goal, firefighters use hoselines and nozzles as a delivery system to transport water from a pump discharge to the fire area and apply it to the fire. You can execute every aspect of the fire attack operation perfectly, but the operation can still fail if you do not manage hoselines and nozzles correctly. Nozzle management is a basic skill that all firefighters should master. It consists of multiple aspects such as nozzle and nozzle hand positioning and nozzle movement. 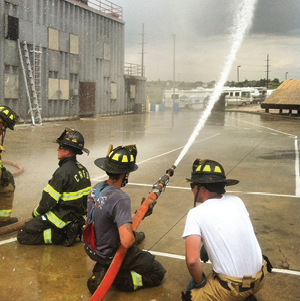 For the third hand-positioning option, the nozzle firefighter positions his leg that is on the opposite side of the hoseline and raises his other knee (the one next to the hoseline) and positions his rear hand in an underhand grip. The difference between the second and third options is that the third option requires the nozzle firefighter to position the elbow of his rear arm against his raised leg; this provides him with additional assistance in resisting the nozzle reaction forces.

(2) By positioning his elbow against his raised leg, the firefighter increases his ability to resist the nozzle reaction forces.

Proper nozzle management also includes using correct nozzle movement, of which there are two types: advancing and fire attack. The two primary times you will need to use the nozzle while advancing a hoseline are to cool the floor and any burning or smoldering objects on the floor and to clear a pathway of hazards for the nozzle team as it advances.

ANTHONY ROWETT JR. is a captain with the Mobile (AL) Fire Rescue Department. He previously was a volunteer firefighter with the Ogdensburg (NJ) Fire Department. He has an associate degree in fire science technology from County College of Morris (NJ), a bachelor’s degree in fire science, and a master’s degree in emergency services management from Columbia Southern University. He has been published in Fire Engineering and FireRescue magazines.

Fire Walls in Multiple Dwellings and Townhouses of Wood-Frame Construction