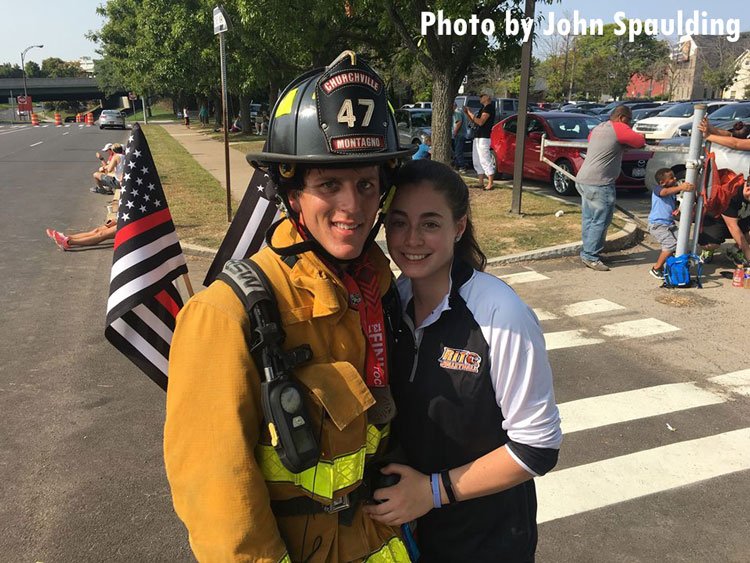 Churchville (NY) volunteer firefighter Justin Montagno was only seven years old when the ​towers at 9/11 came crashing down and 343 firefighters were murdered. He joined the department when he was 18, following in his dad’s footsteps (his father was a volunteer with another company.) Justin has never forgotten and diesn’t want anyone else to forget, either.

This month he ran in Rochester’s half marathon. The Rochester marathon is a qualifier for the Boston marathon, which Montagno one day hopes to compete in. What makes his accomplishment so impressive is that he did it in full turnout gear–that includes SCBA and all the essentials in his pockets. The one thing he did change out was the boots for running sneakers, as the blisters would have been unbearable.

This is his third year competing in the race in gear, and he owes a lot of support to his fire department and chiefs. Montagno is no slacker. He completed his BS at SUNY Brockport in Health Science, and works three jobs.

He does not really advertise to anyone that he running in turnout gear, which weighs an extra 75 pounds and is a thermal barrier–he just hopes people notice and remember. This year, www.thinbluelineusa.com donated two flags for him to display as he ran. Rochester (NY) lost a police officer when Daryl Pierson was murdered on the job, and West Webster also lost two firefighters on Christmas Eve when Michael Chiapperini and Tomasz Kaczowka were murdered while responding to a house fire that ended up being an ambush. In the latter incident, two other firefighters were also shot, but survived.

This year’s race was particularly hot, at 85 degrees with a very high dewpoint. Montagno did not train any extra for this event, and beat his own time by an hour over last year despite the wicked heat and hot sun.

During his run he heard a lot of “thank you for your service,” “amazing,” and “inspirational”.  To him, 13.1 miles is not much more than a short run compared to what some FDNY firefighters are going through right now. There are 6,000 members who have perished or are dealing with cancer directly related to working on “the pile” at Ground Zero.

Montagno later learned that a Rochester Police officer also ran in his daily patrol uniform and is hoping to run with him next year.

WHEN THE ROUTINE BECOMES IRREGULAR