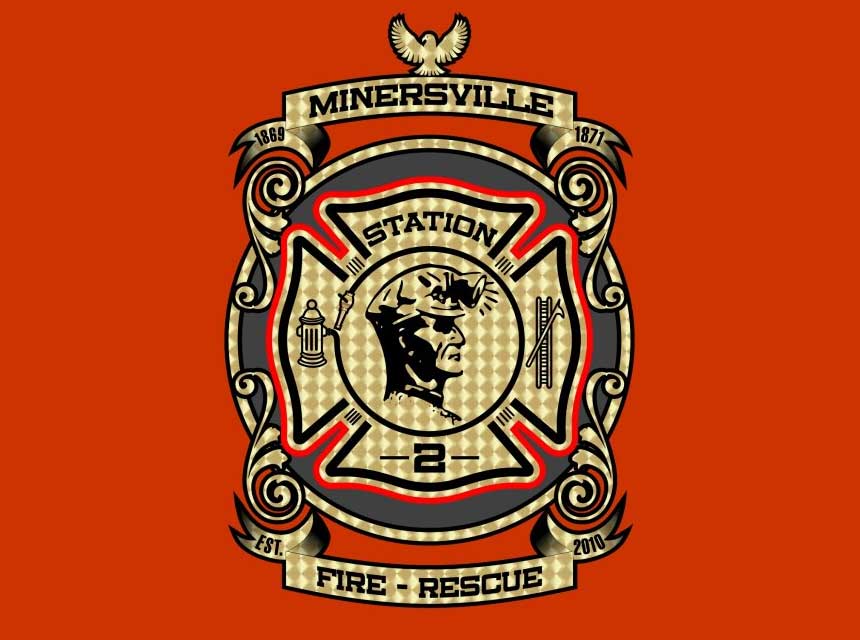 Jul. 21—MINERSVILLE — Quick action by a Minersville police officer, the borough fire chief and his son is credited for saving a man from the second floor of his burning home Tuesday morning.

Flames broke out just after 6 a.m. at 423 North St., the home of Frank Steckler, and damaged two other homes leaving nine people homeless.

Patrolman Timothy Walsh was the first on scene and saw Steckler trying to get out of the second floor window on the front of his home.

Walsh found a ladder to the rear of the man’s home and climbed up to the front porch roof to help him get out.

As Walsh was doing so, Fire Chief Eric Eichenberg and his son, Eric, arrived with the department’s tower truck and used a ladder from the vehicle to assist Walsh in getting Steckler down.

The man suffered minor injuries and was treated at the scene, Walsh said.

“When I got here he was hanging out of the window,” Walsh said.

As he got to the roof, Walsh said, the man disappeared onto the bedroom floor.

“He took a couple of gulps of smoke and went down,” Walsh said, adding that he was able to get the man up enough to get to the window again and then managed to get him onto the roof, where Eichenberg and his son were waiting.

Walsh said that Steckler made a wise decision inside his home, closing the bedroom door behind him, slowing down the large amount of smoke and fire from engulfing the room.

“He did the right thing or else he may not have got out,” the officer said.

Walsh said it is believed the fire originated in the kitchen area of the Steckler home and spread upward to the second floor and then to the adjoining houses.

In addition to Steckler, four people were left homeless in 421 North St. and in 419 North St.

Displaced from 419 North St. were Steven Gorman, who turned 37 on Tuesday; his sister, Christina Gorman, 26; his mother, Mary T. Gorman, 60; and his daughter, Aubrel Gorman, 5.

All those displaced are being assisted with food, clothing and shelter by the Tri-County Chapter of the American Red Cross, disaster captain Patty Daley said.

A dog and two cats that were inside the Steckler home perished in the fire, but one dog was able to escape.

Eichenberg said he was coming up the street when he saw fire and jumped into the department’s tower truck and went to the scene.

He and his son saw Walsh on the roof trying to get Steckler out of the window, grabbed a ladder and went to help.

Steckler was able to get down the ladder by himself with some assistance and was then treated by EMS who administered oxygen to assist him with his breathing that was labored due to inhaling smoke.

Steckler’s breathing became better and he refused transport to a hospital for additional medical care.

Eichenberg said no firefighter injuries were reported and the fire was declared under control at 7:21 a.m.

He said the cause remains under investigation and that a state police fire marshal has been called in to assist.

Firefighters from Minersville and companies from surrounding communities responded to the call as well as the Schuylkill Haven Fire Department Rapid Intervention Team.

Two Children Die and Two Others Rescued in Englewood Fire