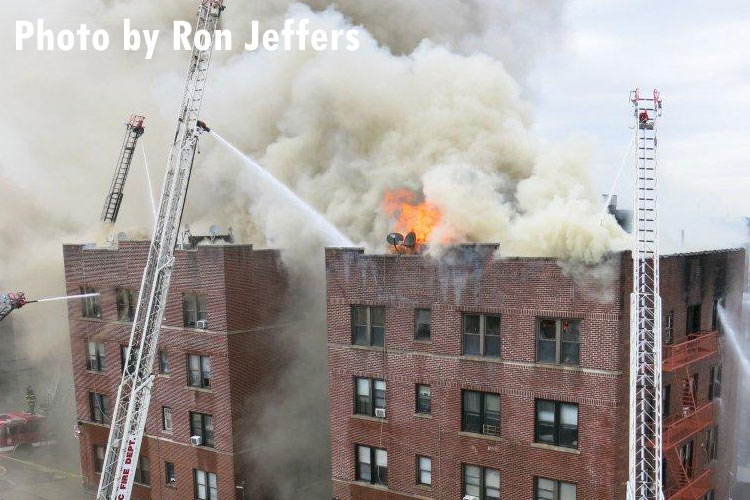 Photos and write-up by Ron Jeffers

As families gathered in a large Passaic (NJ) apartment house, cooking and making other preparations for Easter Sunday, a fire tore through the four- and five-story “U” shaped building, starting around 1 p.m. All escaped the thick smoke and flames, which displaced an estimated 200 people.

Firefighters stretched a line to the fifth floor, where they located a rear bedroom area fire. Numerous residents were self-evacuating and Battalion Chief Joe Cajzer struck a second-alarm. Interior units radioed to the chief that they had knocked down the main body of fire in the apartment, but believed there was fire above them. Truck company members reported fire in the cockloft.  As mutual aid companies began to enter the city to cover city firehouses, Cajzer ordered them to the scene.

Firefighters continued interior operations as trench cuts were made on the roof. Members at the scene stated that they made cuts, but the rapid moving flames had passed them. Interior crews were ordered back down to the lower floors and eventually out of the structure. Roof teams made as many cuts as they could before they also had to abandon the roof.

A huge column of black smoke was visible for miles, as steady sirens from mutual aid companies moved in and set up. Flames broke through the roof and out of top-floor windows. Master streams surround the structure, which included ladder pipes from two Passaic trucks, Totowa, Clifton, and tower ladders from East Rutherford and Wayne. In addition, deck guns were placed into operation by Passaic Engine Companies 1, 2, and 3. From time to time, thick smoke would also bank down to sidewalk level.

Firefighters battled the fire for more than four hours before it could be considered contained, around 5:45 p.m. By that time, the roof had collapsed into the top floor and some bricks had fallen from the “D” side of the upper floor area.

The displaced were sent to Passaic High School for accountability and assistance from city officials and the Red Cross. This was one of three multiple-alarm fires to hit this city in past weeks.  On Tour 4’s last shift, these same firefighters, and many mutual aid crews, operated at a five-alarm warehouse fire.

Chief of Department Patrick Trentacost told the media he estimated 150 firefighters were on the scene. This plus police, medical, and rehab personne,l brought that number of emergency responders at the scene to some 200.