When firefighters arrive at a Queen Anne dwelling fire, they’ll often have their hands full from the start. Because of the construction features, life hazard, and potential fire spread, fires in these large structures often result in a multiple alarm being transmitted. Queen Annes are notorious for being unique and elaborate buildings—no two are alike. They are built with balloon-frame construction, which allows a fire to rapidly travel from the basement to the attic. Fires starting in the basement or on a lower floor can often bypass upper floors and extend directly to the attic.

These dwellings are also very large and can be anywhere from 2½ to 3½ stories in height (some homes built on a grade can be higher), 25 to 30 feet in width, and 30 to 50 feet in depth. The roofs often have many peaks and valleys, dormers, and a cupola/turret (a tower-like room with a peaked or dome roof). The roof may be covered in slate, tile, or multiple layers of shingles covering older wood shakes and sleepers, making roof ventilation operations difficult.

FIRE IN A QUEEN ANNE

The siding on these dwellings can be a multitude of materials—wood shakes, asphalt shingles (“gasoline siding”), stucco, brick veneer, aluminum, vinyl, asbestos tiles, or a combination. If the fire is venting out a window and the siding is flammable, expect autoexposure or the face of the structure to be well-involved on arrival.

The Passaic (NJ) Fire Department was dispatched for a reported fire in one of these structures in the early afternoon hours and encountered multiple issues during the firefight. The department’s initial box alarm for a structure fire dispatched three engines, one truck, and the battalion chief (BC). On arrival, the fire was venting from the B and C sides of the structure and exposing an outside wood deck and exterior stairwell to the third floor. In addition, the siding of the home was engulfed in flames and autoexposing to the second-floor windows, which broke on fire department arrival. 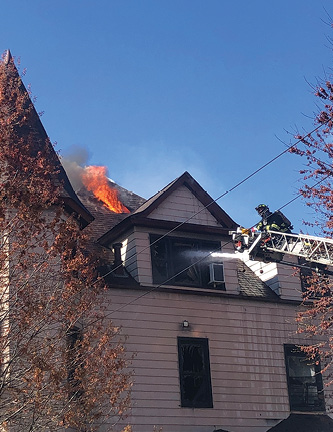 (1) Air-conditioning units in attic windows can reveal the space is used as a bedroom or office area and not for just storage. (Photos by author.) 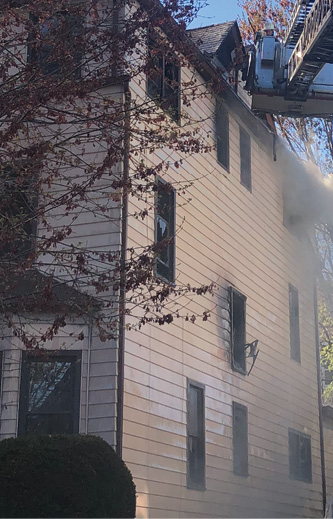 (2) Windows not in line with others or midfloor should be considered windows in a stairwell. Laddering these windows usually won’t provide access to a room. Always use caution when operating below window air-conditioning units; they can suddenly fall out and injure a member on the ground. 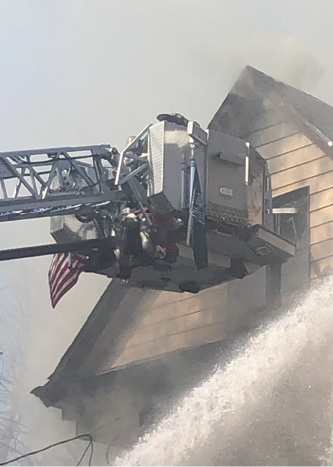 (3) Use a tower ladder stream to knock down a fire in an attic or hydraulically overhaul the roof. If you use it to remove roof sheathing, inform all units on the fireground to maintain a safe distance from the building and be aware of flying debris.

Command immediately struck a second alarm because of the advanced fire conditions and complexity of the Queen Anne-style home. The additional alarm brought in Passaic’s remaining engine and truck company as well as mutual aid to the scene. Clifton (NJ) Fire Department Ladder 3 responded directly to the scene; the Paterson (NJ) Fire Department sent a task force of two engines, a ladder, and a BC. The task force group was split between on-scene operations and station coverage.

Luckily, the dwelling sat on a corner lot, about 30 feet off the roadway; this allowed the two ladder companies to cover both sides of the structure with their aerial and tower ladders. The first-arriving engine company immediately stretched a 2½-inch attack line to the B side of the structure and began to knock down the fire that was autoexposing to the second floor. At the same time, the second-due engine stretched a 1¾-inch hoseline and began knocking down the fire in the rear, repositioning the line to the front door where there were heavy fire conditions. The 2½-inch line operating on the B side was then redirected to the front door to assist and back up the crews advancing the 1¾-inch line. Both engine companies worked in unison to aggressively attack the fire. Unfortunately, they encountered an obstacle: The dwelling had been renovated, and the first floor had maze-like conditions, making it an arduous task to reach the seat of the fire.

The first-due truck company began a primary search of the first floor in coordination with the suppression efforts. All hands focused on the interior operations of search and extinguishment. Unfortunately, because of the maze-like conditions and the fire’s advance, it was rapidly spreading in the voids in the walls and ceilings, which hampered extinguishment efforts. The engine companies were trying to stop the fire’s progression and not let it advance up the large, open interior stairwell.

Note: Queen Anne dwellings have numerous sets of stairs. Often, they’ll have one large, open stair leading from the first to the second floor and a rear or side stairwell, which is usually narrow and can run from the first to the third floor (often enclosed and referred to as the “servant stairs”). A stairwell can also be under the main stairway leading to the basement, or it may be combined with another stair. Access to the attic may be through a stairway in a closet on the top floor. When the door is opened, narrow wooden stairs lead to the attic area. In some instances, there may be an exterior stairway that provides access to the basement. Unbeknownst to the units operating on the first floor, the second stairwell was enclosed and ran right next to the main set of stairs in the structure (also contributing to fire spread).

As units fought their way to the rear of the first floor to extinguish the fire, other crews made their way to search the upper floors for any victims and fire extension. On the second floor, crews had difficulty navigating the area in the high heat and heavy smoke conditions from renovations and multiple rooms. A second 1¾-inch handline was stretched to the floor above to combat the spreading fire.

At about this time, the electrical service of the building was exposed to fire and the meters began to spark violently while flames impinged on the overhead wires. Command immediately requested the power company’s response to the location to shut down the electric and gas to the building. Because of the complex issues on scene, a third alarm was transmitted, bringing in neighboring companies from Passaic and Bergen County fire departments. Some responded and operated at the scene; others provided station coverage.

As crews faced harsh conditions throughout the structure, members made their way into the attic to perform a primary search. Often, these areas are used as living quarters. If you see curtains, blinds, or a window air-conditioning unit, consider the area inhabited.

When members made their way into the attic area, severe heat conditions made it difficult to search. Passaic Ladder Company 2 was in the process of venting the roof to alleviate these conditions. With balloon-frame construction and knee walls in the attic, if you encounter high heat in the attic space, suspect fire is hiding behind these walls. A thermal imaging camera can help determine if this is occurring.

Also, if you’re searching this area and going to make inspection holes in the walls, do not make them near the stairs. Firefighters don’t want to cut their means of egress off when working in the attic.

Once the additional alarm companies began to arrive on the scene, they were directed to assist with suppression on the upper floors and relieve first-in units on the hoselines. They hooked into additional hydrants to provide adequate water and pressure in case master streams were needed. In total, three handlines were in operation in the interior of the building knocking down the fire. Unfortunately, the fire began to show out of various areas, windows, and the exterior siding of the structure from running in void spaces in the walls, ceilings, and floors.

Command, fearful of the exposed and hidden fire in this oversized Queen Anne with a maze-like layout, withdrew the companies to hit the fire with exterior streams in attempts to gain control over it and ensure firefighter safety. A ladder pipe, two tower ladders (one responding from East Rutherford on the third alarm), and three handlines began to knock down the heavy fire in the attic and first and second floors from the exterior. 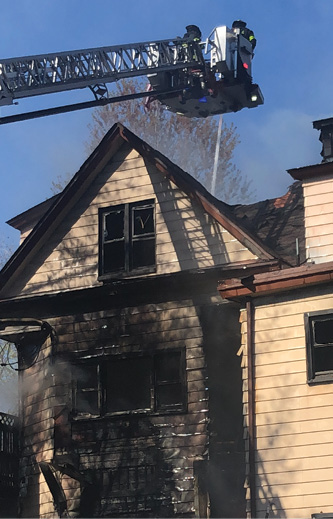 (4) Autoexposure through the windows and running up the side of a building that has combustible siding can affect crews operating on the floors above. Have a hoseline in position to protect these firefighters. 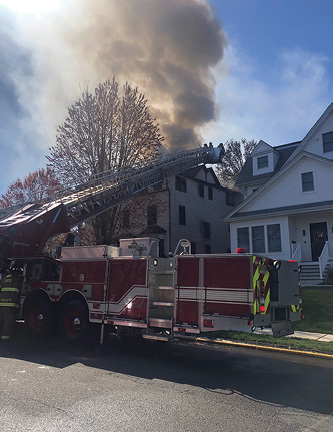 (5) A tower ladder positioned between dwellings offers access into the floors of the fire building for water application and search operations. In addition, it can protect the exposure from radiant heat. 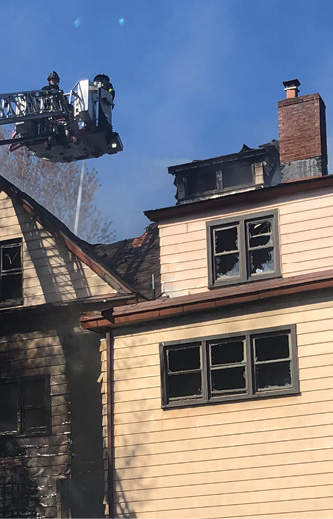 (6) When operating from the tower ladder’s bucket in the vicinity of the chimney, always be wary of its condition and anticipate it could collapse at any moment.

Once crews knocked down the fire from the exterior, the building was reevaluated for structural damage. Water runoff was allowed to occur before units reentered the building to extinguish hidden pockets of fire and conduct overhaul.

Fires in these structures are more complex and labor-intensive than in most private dwellings. Firefighters and officers must look for clues to choose the right tactics for fire attack. Calling for additional resources early can help lead to a successful firefight. Luckily, at this fire, there were no victims trapped, but the same fire after midnight could have had a devastating effect on life safety. Firefighters must be capable of stretching numerous hoselines while performing multiple rescues off ground ladders or vent-enter-search operations or off the porch roof on arrival.