When it comes to looking at a work of art, watching a sports event, or viewing a debate, perspective means everything. Often you will “see” what you have been preconditioned to see. The same can be said for looking at a physical object such as a building. Civilians, for example, are conditioned to view a building as a substantial physical presence consisting of solid wood, masonry, and steel components. On the other hand, a firefighter viewing the same building is likely to see voids, shafts, and light construction features primed for rapid fire and smoke extension. However, at times a complex operation or a confusing building layout can influence a firefighter’s perspective.

Fire Department of New York (FDNY) personnel were confronted with this exact challenge at a multiple-alarm fire. On January 25, 2013, at 0433 hours, units responded to a fire on the corner of St. Nicholas Avenue and West 188th Street in Manhattan. The building was an H-shaped, six-story, 200- × 150-foot occupied apartment dwelling of ordinary construction with two separate wings (Figure 1). On this exceptionally cold night, temperatures were hovering in the low teens. On arrival, units observed flames venting from the windows of a second-story apartment and immediately initiated hose stretches and truck tactics for an aggressive attack on the fire.

Because of the cold weather, the nearest hydrant on West 188th Street was inoperative. Incoming units were immediately radioed regarding the water supply issue, and the second-arriving engine located a good hydrant nearby on the same street. A supply line was stretched to the initial engine, and a water relay was quickly established.

Shortly after starting their work, firefighters also discovered fire in a store on the first floor of the building. Given the time of day, the life hazard, and the expanding fire challenge, the first-arriving chief transmitted a second alarm.

I arrived at the scene and assumed command of the fire three minutes after the transmission of the second alarm and established a command post on the corner of St. Nicholas Avenue and West 188th Street. This position allowed direct views of the fire and smoke showing on sides A and D of the building. By this time, heavy fire was venting from the store on the first floor as well as the second-floor apartment. Within minutes I received reports of fire spreading to an apartment on the third floor.

The numerous vertical and horizontal voids in this type of construction can lead to rapid fire extension to remote sections of the building. Units were assigned to determine strategic positions to hold the fire in check. Now, since fire was showing on several floors, the cockloft was the immediate priority since it provided a path for fire to extend to the building’s other wing. I transmitted a third alarm at 0455 hours to address the expanding staffing requirements. A staging area was also established nearby to maintain control of what would eventually amount to a total response of 40 units and 160 firefighters.

Thick smoke made it difficult to view fire conditions from the command post, so I relied on radio communication to obtain information from personnel operating inside the building. From my vantage point in the street, I eventually observed fire showing in a fourth-floor apartment window on side D. This was immediately relayed to a unit inside the building, which responded that it was dealing with fire it had located on the third floor. A confusing radio exchange followed as we attempted to define the exact location of fire extension.

This confusion resulted from the different building profile seen from different points of view. As shown in photo 1, from my position in the street, I was looking at a six-story structure with the store on the first floor. (The second floor windows in the photo are below the blue sidewalk shed, which was not in place at the time of the fire.) However, the unit inside had entered the building on side A. Personnel went through a courtyard and walked up a short flight of steps into the main entrance. From their perspective, the building appeared to be only five stories high (photos 2, 3). Their “third” floor fire turned out to be the fourth-floor fire I had observed from the command post.

Once the fire location was clarified, personnel positioned a hoseline and cut off the fire at the fourth floor. It took four hoselines to contain and extinguish the fire throughout the building. Truck companies searched numerous apartments and performed extensive overhaul because of the construction and size of the structure. Building shafts and voids were examined from the basement up to the cockloft. Following an hour and a half of intensive firefighting, the fire was finally placed under control at 0606 hours.

The determined efforts of FDNY firefighters, company officers, and battalion chiefs were instrumental in the success of this operation. In the middle of an extremely cold night, they extinguished heavy fire on four floors in a building containing 50 apartments with no serious injuries to residents or fire personnel. The challenges confronted highlighted a number of basic firefighting concepts.

Perspective. Both the topography and the building profile can present problems in identifying specific locations in a building. A structure can appear to have a different number of floors when viewed from different sides. The view from the street may not coincide with the perspective of the personnel operating in the interior. Since the top of the building is usually obvious, it will sometimes be easier to communicate the location of a particular window by counting down from the roof level.

Corner buildings. A building located on a corner has the potential for confusion in side labeling, particularly if the structure has more than one entrance. For safety and ease of communication, all personnel must be on the same page in identifying what will be side A of the building. Urgent messages regarding fire extension and the location of victims or firefighters in distress must quickly and clearly identify their precise location. Incident commanders (IC) should identify side A early in an operation and inform all operating personnel. Later-arriving chiefs should not change this identification when they assume command without a compelling reason. Relabeling sides after an operation is underway can be disruptive and dangerous.

Six-dimensional firefighting. A firefighter’s perspective should always consider all possible directions of potential firespread. Generally, the fire location and the floor above the fire should be the immediate priority. However, there is always the possibility that the fire originated in a basement or floor below. In certain kinds of construction, fire can also drop down through voids inside the walls and floors. Undetected fire beneath operating firefighters can prove to be disastrous.

At times we may also witness fire behavior that is completely out of the norm. At this operation fire originated in a second-floor apartment, vented out of a window, and dropped onto the store awning below on sides A and D. Within minutes, an apparent second-floor fire expanded into an incident involving two floors of heavy fire.

Use your imagination. Procedures and tactics are the backbone of the fire service and comprise a major portion of our training agenda. However, while appropriate tactics are absolutely essential, there is a danger of getting too narrowly focused if we adhere exclusively to step-by-step procedures. Perhaps using your imagination at an operation is not emphasized enough.

The best way to manage a fire is to first note the location of visible fire and then to ignore it completely for a few seconds. Imagine a six-dimensional view of the building and consider the possible avenues for fire extension. Include the floors above, all adjoining sections, and even the area below. As shown in this incident, fire can occasionally spread in unexpected ways. The goal is to cut off the fire rather than chase it.

Personnel accountability. Whether you are commanding a multiple-alarm fire in a large urban building or a dozen firefighters in a suburban ranch house, one of an IC’s prime responsibilities is keeping track of personnel. Most people are capable of mentally retaining about seven different bits of information (this is the reason telephone numbers were originally limited to seven digits). Once the numbers increase and you are accounting for dozens of firefighters, it becomes an overwhelming task. It is further compounded when personnel are operating in many different locations as they were at this operation.

Any incident can be carved into manageable slices by placing a sector commander in charge of each section. Assign and position sector commanders first, and then let them get back to you to verify the identity of the units with which they are working. Personnel accountability is essentially a communications challenge. Therefore, it is vital that sector commanders communicate using exposure and floor identification that coincides with the IC’s view from the street.

FDNY uses a portable command board to facilitate this process (photo 4). A sketch of the fire building is drawn on this board, and magnetic unit identification tabs are placed on it to provide a quick visual reference on who is operating and where. 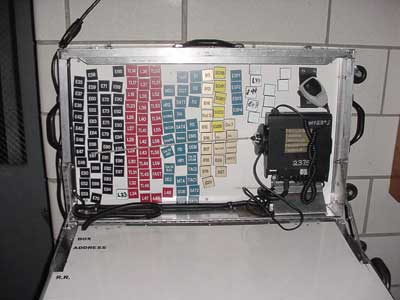 The amount of experience in one’s firefighting résumé can grow considerably over time. This experience allows us to make rapid and accurate decisions at an operation. However, it can also precondition our expectations when fighting a fire. It is easy to slip into the mindset that tells us “it has always happened like this in the past, so it must be doing the same now.”

We will occasionally encounter fire behavior and fireground perspectives that do not match past experiences. Situations may require us to step back and reevaluate our thinking. In fact, one of the challenges for an experienced IC or firefighter is the ability to maintain a beginner’s approach to his work. Such an approach requires a constant adherence to basic concepts regardless of how routine a fire may appear.

Basic tasks like communicating a specific location in a complex building layout and determining likely paths of fire extension can sometimes prove to be deceptive and challenging. As evidenced in this operation, your fireground perceptions will not always match your realities.

● THOMAS DUNNE is a deputy chief and a 32-year veteran of the Fire Department of New York and has extensive experience working in Mid-Manhattan and the Bronx. He has been the incident commander at hundreds of fires in residential, commercial, and high-rise buildings. He has written numerous articles for Fire Engineering and has presented at conferences across the country. He also serves as an adjunct instructor for the National Fire Academy. A Fordham University graduate, he writes and lectures on a variety of fire service topics through his “Third Alarm Fire Training” seminars.