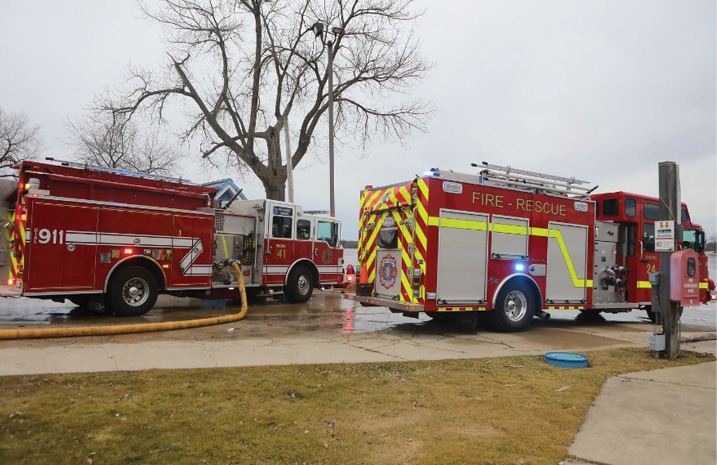 Fire operations in rural and nonhydranted areas always add additional factors that, if not planned for, can have a significant impact on the outcome of an incident. For the McHenry Township Fire Protection District (MTFPD), located northwest of Chicago, Illinois, prior planning, establishment of new procedures, and training for these types of events led to a successful outcome at a significant fire.

On January 6, 2019, at 1147 hours, the MTPFD responded to a reported structure fire at 3904 N. Pitzen Road in the village of Johnsburg, Illinois. The house was a large, two-story, wood-frame home approximately 2,500 square feet and built in the early 1970s. It included a full basement. There was one exposure, another three-story house about 25 feet from the fire building, on the B side.

Doing the Job with Limited Resources in Small Departments

Initial reports indicated that a person could be trapped inside. While companies were en route, the Johnsburg Police Department arrived and confirmed that there was a fire. The first-arriving Engine (E1242) found heavy smoke conditions and fire in Division B. The house was about 150 feet off the roadway, in a valley along Pistakee Bay. There was an approximate 30-foot drop in elevation from the roadway to the front of the house; the rear of the home backed up to Pistakee Bay. Winds coming off the bay were up to 21 miles per hour; the temperature was 35°F.

Because of the length of the driveway and the distance from the road, E1242’s crew pulled a 2½- to 1¾-inch skid load. They found the exterior porch at the Division A/D corner fully involved. An extended size-up revealed smoke-stained windows on all sides of the house and heavy smoke conditions throughout the structure.

Battalion 12 (Battalion Chief Kevin Sears) arrived and established Pitzen Road Command. He designated E1242 as the Fire Attack group, assisted by E1245, and upgraded the alarm to a Mutual-Aid Box Alarm System (MABAS), a multistate organization for structuring and providing mutual aid, of which the MTFPD is a part. The MABAS box alarm brought in an additional engine, two tenders, a truck, a squad, an ambulance, and two outside chief officers representing eight surrounding communities. 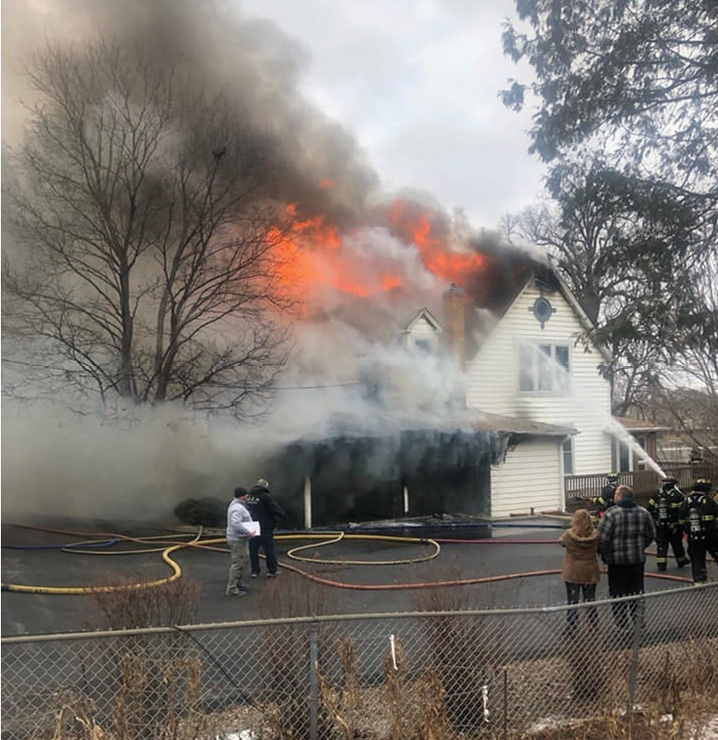 (1) The view of the house from the Division A/D corner. [Photo by Dave Reid, McHenry Township (IL) Fire Protection District.]

A major concern for the incident commander (IC) was that the conditions visible from the exterior were not matching the reports from interior companies. At this point in the operation, attack lines were operating on both the first and second floors, yet conditions visible from the exterior indicated fire in the basement, on the first and second floors, and in the attic. The offensive fire attack was changed to a defensive attack. An emergency evacuation was ordered, all companies were removed from the building, and a personnel accountability report was conducted.

As additional companies arrived and the command structure was further developed, command was transferred to Chief Tony Huemann and the initial IC (Battalion 12) became Operations. Other chief officers were assigned to Water Supply, Safety, and coverage of the rest of the fire district.

Later during the fire, crews transitioned to some offensive fire attack by laddering the second-floor porch in Division C. From there, they entered to pull ceiling and attack the fire.

Approximately 40 percent of the fire district’s 56 square miles is a nonhydranted area, and this fire was in one of those areas. The initial dispatch to fires in a nonhydranted area includes one of the district’s three tenders. The initial dispatch for this fire included MTFPD Tender 1273 and a tender from the Spring Grove Fire Protection District as part of automatic aid. 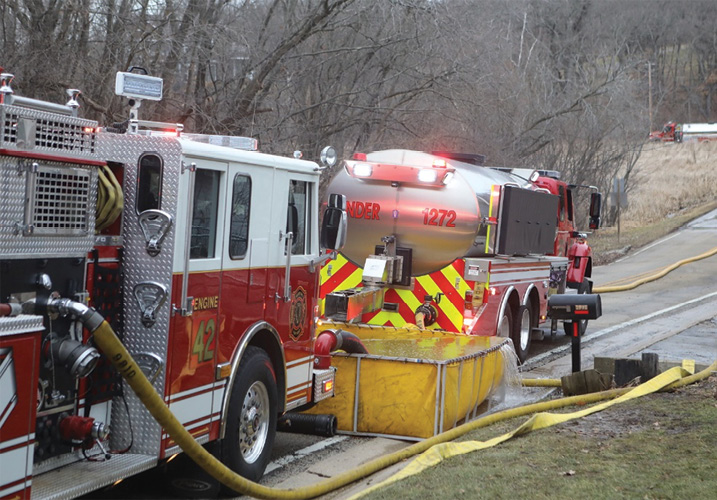 (2) The first-arriving tender established a nursing operation on the roadway in front of the fire scene. (Photo by Tim Olk.)

Because of the sloping terrain and narrow access on the road in front of the house, 500 feet of five-inch supply line was laid to establish a second portable tank site approximately two blocks to the north at the intersection of Pitzen Road and Lewis Lane. MTFPD Engine 1243 established that site with two portable tanks.

Because of the number of tenders needed to support the fire attack, two separate fill sites were set up. The first was at the Bald Knob boat marina, where we used a dry hydrant the department installed several years ago. That hydrant was capable of providing up to 800 gallons per minute (gpm) to refill the numerous tenders. Later in the incident, an engine from the Fox Lake Fire Protection District was also used to draft from the bay to help cut down on the turnaround time of the tenders.

The second fill site was across the street from Bald Knob and directly on the Fox River. A mutual-aid engine from the Fox River Grove Fire Protection District established that site.

During the course of the operation, more than 30 tender fills were accomplished; more than 100,000 gallons of water were used in the fire attack. We never lost the water supply during the entire fire operation.

The home experienced significant damage; however, companies were able to retrieve several items of value to the homeowner.

(3) The primary fill site at the boat marina used a combination of a dry hydrant and drafting from Pistakee Bay. (Photo by Tim Olk.)

Each of the MTFPD’s seven engines carries two 10-foot sections of hard-suction hose. In addition, each engine has mounted on the front bumper a six-foot section of lightweight hard suction attached to a low-level strainer. Each of the three tenders and three of the engines carry 2,100-gallon portable tanks.

Each level of MABAS alarm upgrade brings in an additional two tenders along with other fire apparatus, support units, and chief officers. The fire was upgraded to the fourth-alarm level, which resulted in 10 tenders being on the scene.

Because of the large nonhydranted area that is protected, the department makes a significant commitment to rural water supply training, and members completed more than 1,200 hours on the topic in the past two years. This training is organized and conducted by the department’s full-time training instructor; hands-on drills are emphasized. Some of the topics covered annually include the following: initial tender nursing operations, setting up for rural water supply operations, dry hydrant use, drafting, tender shuttles, use of floating docks, use of portable tanks, and communications between the driver/engineer. In addition, all new members receive training on rural water supply as part of the department’s very extensive probationary firefighter training program.

The fact that there was never a loss of water supply during the six-hour fire is a testament to the training, experience, and hard work of the engineers, officers, and firefighters assigned to the water supply operation. There were several occasions where quick thinking or a “plan B” was needed; each time, they reacted quickly and solved the problem.

Some of the other lessons learned include the following:

The majority of the structure was saved because of the aggressive work by the crews. Additionally, the amount of planning, the establishment of formal water supply procedures, and training on rural water supply played key roles.

RUDY HORIST is a 37-year veteran of the fire service and a deputy chief for the McHenry Township (IL) Fire Protection District. He serves as vice-chairman of the Illinois Fire Chiefs Association Volunteer & Combination Officer Committee and is an FDIC International workshop presenter and a member of its Educational Advisory Board.

Leadership Thoughts From A Military Icon