When preplanning a building, do you take the time to give yourself a tactical advantage, or do you go through the motions? Some firefighters view preplanning as a waste of time and simply go down a checklist, filling in the required information on the form that they will submit to their chiefs to show that they completed the required building preplans. Other firefighters understand that preplanning provides firefighters with an opportunity to gain a tactical advantage if a fire occurs in the building. It is common for firefighters conducting preplanning activities to pay attention to certain considerations such as water supply (location and capability), apparatus positioning, a key box (presence and location), points of access and egress, fire department connection (location and type), fire alarm panels, elevator panels, stairwells (locations, types, and size), and standpipe outlets. These are just some of the issues commonly focused on during preplanning activities. One area, however, that is often missed in preplanning is one that will have a great impact on operations if a fire occurs in the building—the initial attack line operation. 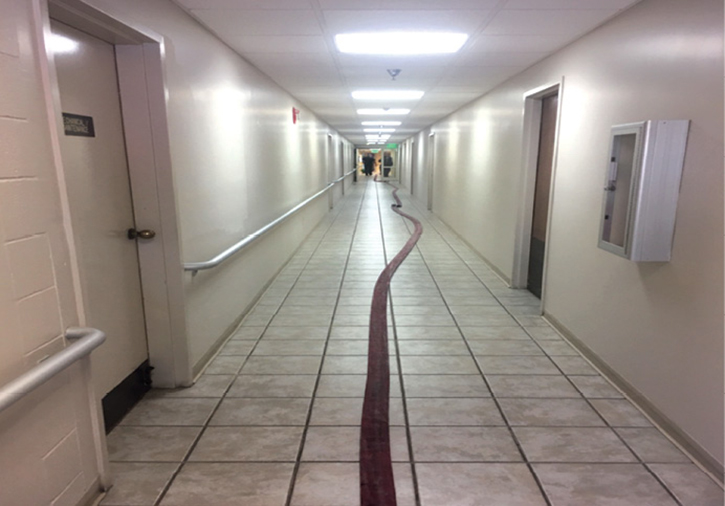 (1) By stretching a dry hoseline in a building during preplanning activities, firefighters determine the exact hose length needed for the building. [Photos courtesy of the Mobile (AL) Fire Rescue Department.] 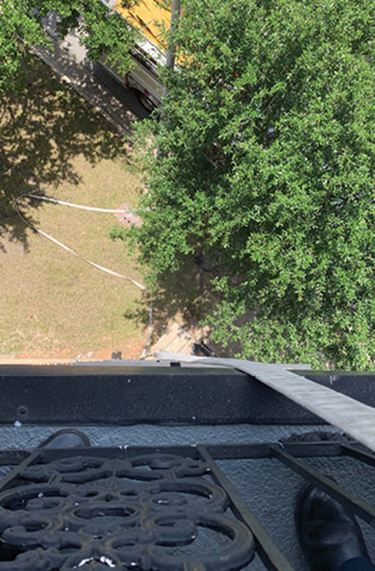 Preplanning the initial attack line provides valuable information the officer needs to determine the size of hoseline best suited for the conditions present: fire load, building layout, the length of the hoseline, and the proper target flow rate to achieve fire control in that building. In choosing the nozzle, the company officer’s objectives, in addition to achieving the target flow rate, are to have an effective reach while maintaining a safe and manageable nozzle reaction.

Generally, an effective reach of 40 to 50 feet is the goal for interior operations, but the need for increased reach should be determined during preplanning. For example, increased reach may be needed in a building with an open floor plan and a heavy fire load such as a furniture store. In this case, a smooth bore nozzle would offer the greatest reach, allowing the nozzle team to use the reach of the nozzle’s stream to begin fire control operations from a safe distance while advancing toward the seat of the fire. 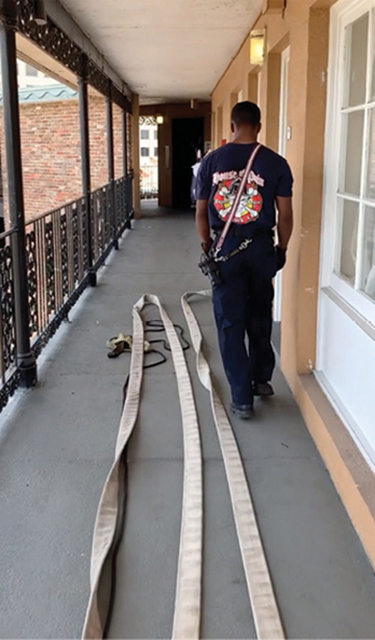 (3) Firefighters stretch a second hoseline during preplanning. This time, they ascertain that if the engine is properly positioned based on the findings of the preplan, the hoselines loaded as a dead bed, as well as the 200-foot preconnected hoseline, would reach all of the rooms on the sixth story of this motel.

Establishing the staffing needs of the initial hoseline during preplanning helps to ensure that personnel will be available to operate a large hoseline or to advance the line through cluttered rooms and around many turns. The company officer can simply order the next arriving engine company to assist with the initial attack line operation if this is not already a standing order within the department’s standard operating guidelines.

Length of the hose stretch. Preplanning the length of the stretch can provide a great tactical advantage. Estimating the stretch is an aspect of the hoseline operation that separates the average from the good and the good from the great. Great engine companies rarely stretch short and do not simply pull the longest hoseline on the rig because they don’t know how much hose they will need.

Instead, great engine companies effectively estimate the stretch for every hoseline operation and use a hoseline length that meets the needs of the building and the operation; at the same time, however, they do not use an excessively long hoseline that necessitates excessive pump pressures and leads to kinks. Although the hose stretch must be estimated for every hoseline operation, knowing the exact needs of the building through preplanning ensures that the correct length is used. Preplanning the hose stretch essentially replaces “estimating” with “knowing” in determining a stretch. If you are in a building conducting a preplan inspection, take the time to determine the exact needs of the building. Know in advance exactly what length of hoseline to use.

You can predetermine the proper length of the hose stretch during preplanning in multiple ways. One easy way is to stretch a utility rope through the building and determine the length based on the length of the rope. Mark the rope in a manner that matches the lengths of hose your department uses. You can use a search rope in place of the utility rope; its benefit is that it usually is marked in some fashion at specific intervals. The search rope also provides the added benefit of creating an additional opportunity during the preplan for the firefighters to deploy the search rope, creating additional training during the preplan. Some building owners will allow hoselines to be stretched through the building during preplanning.

Hoseline staffing and length. Determine the hoseline staffing and length in the same fashion as you would for any other building. Preplanning hose stretches that involve standpipe systems differs from preplanning stretches without standpipes in the attention you must give to the standpipe hose outlet and the stairwell. When using a standpipe system, use the hose outlet on the floor below the fire floor either in the stairwell or just outside the stairwell. It is important to know where the hose outlets are located so that during a fire you do not lose time looking for them. It is just as important to know where there are no outlets; some buildings do not have hose outlets in every stairwell.

Also note in the preplan the presence of PRVs and their location. PRVs are similar to PRDs in that they reduce the amount of pressure available from the hose outlet valve for firefighting operations. The difference between PRVs and PRDs is that PRVs reduce pressure internally within the valve itself and reduce pressure during both flowing and nonflowing situations. PRDs, on the other hand, are external devices that are added to the hose outlet valve and reduce pressure only during flowing situations. Also, determine and add to the preplan whether or not the PRV is adjustable. If it is adjustable, determine which tools are needed to adjust it.

Stairwells are an important component of preplans. Record the number and type of stairwells and their locations and sizes. Note also if a roof access is present. This information will identify the stairwell in the best location for initiating fire control operations. Stairwells within the same building can vary greatly in size. Some may be so narrow that advancing a hoseline will be extremely difficult because of the tight turns. Note these conditions in the preplan. Also, note the presence of a well hole in the preplan. A well hole is the space between the sections of the stairs that can be used to stretch the hoseline up the stairwell vertically between the sections of the stairs rather than on the stairs and around the stairwell. Use of the well hole will greatly reduce the length of hoseline needed as well as the number of firefighters needed to stretch the hoseline up the stairwell.

Access to the stairwells is another important consideration. You may find that in some buildings the enclosed stairwells on the ends of the building do not access the lobby floor and have only ground-level access from the exterior. This is vital information; entering the lobby and finding no interior ground-level entrance to the stairwell would delay getting the initial attack line in operation.

Determine also during preplanning if the interior stairwell doors are locked or unlocked. This information in the preplan will identify the forcible entry efforts to get the initial attack line in operation. If multiple doors need to be forced, additional personnel may be needed; knowing this in advance would be critical to the success of the operation.

You must be able to use the information acquired while preplanning should you respond to a fire in the building. All companies responding, for example, should know the hose stretch information in the preplan. The easiest method for sharing information such as the hoseline needs is to include it on the department’s official building preplan form. In addition, maintain a copy of the preplan form at the fire station for the use of the other firefighters in the company who have a first-due responsibility. At a minimum, document the hoseline needs of the building on the building preplan form and maintain a copy of the form at the fire station for use by the other firefighters who may respond first due to that building.

ANTHONY ROWETT JR. is a captain with the Mobile (AL) Fire Rescue Department. He was previously a firefighter with the Ogdensburg (NJ) Fire Department. He has multiple degrees in fire science and emergency services management. He is a graduate of the Alabama Smoke Diver course. He is the owner of Port City Fire Training. He is also an instructor at the Gulf Coast Emergency Response Academy. He is a contributing author for multiple fire service publications. He has instructed at multiple fire service conferences as well as for individual fire departments. He is a co-host of the “Generation Engine” podcast for Fire Engineering.

IN Man Drowns While Rescuing Woman in Lake Michigan

First-Due Battalion Chief: The Can