When automatic sprinkler systems were developed in the latter half of the 19th century, around the time of the Industrial Revolution, their focus was primarily to protect the structures that were built of wood. The manufacturing occupancies and low storage heights (most were stacked by hand) resulted in fires that were easily controlled by the pipe schedule sprinkler systems of that era. Much like when we speak of the evolving fire environment in modern residential structures, the fire environment in manufacturing and warehousing occupancies has also evolved to where the combustibility has increased considerably and storage heights have increased exponentially. The former natural materials are now synthetic (hydrocarbon-based), and storage heights of 50 to 100 feet are now being achieved. In combination, these two factors now create fires that are very challenging to suppress.

The design of fixed fire suppression systems has also evolved. The former standard sprinkler (with a ½-inch orifice) was designed to optimally deliver 15 to 20 gallons per minute (gpm). These did a good job of protecting low-piled storage and light manufacturing. Even today, millions of these sprinklers are still being installed in hotels, hospitals, schools, and other lighter-hazard occupancies.

To address the higher challenge of the synthetic commodities and increased storage heights in warehousing, new sprinklers were developed in the latter half of the 20th cenpreintury. These sprinklers are designed to deliver 150 to 250 gpm per head. The high flow rates from these heads are designed to penetrate a vertical fire plume and suppress a fire rather than simply control it. The development of quick-response fusible link technology was key in achieving early application of water to result in suppression.

A full-fledged fire in a high-challenge occupancy may well be a once-in-a-career event for a fire service member. There is little opportunity to learn from experience; a mistake in fireground tactics at a fire in a 1,000,000-square-foot warehouse that results in destruction can be very costly not only in dollars but in lost jobs, tax base, and so on. If you have such high-challenge buildings in your response district, do you have a game plan in place to help ensure a positive outcome?

Consider a high-rack storage warehouse. These have become commonplace in most areas of the country and have common design features such as high roof heights, windowless walls, and limited fire subdivisions. Now consider how a fire develops in a building and how the fire protection system responds to it. A fire will typically begin at floor level and rapidly spread up the vertical rack face, reaching the roof level in less than one minute. Shortly after the flames start hitting the underside of the roof deck, the first automatic sprinkler operates, followed by an additional three to four sprinklers within the next minute. The flames, smoke, and water are now being driven downward through the rack and the aisle to floor level. Visibility in the fire area is being obstructed by the smoke. An orderly evacuation of the building is underway, as smoke has not yet enveloped the building. The sprinkler system continues to operate and drive the flames, smoke, and water down to the base of the rack. This fire is being suppressed, damage to the property is being minimized, and the hazard to the life safety of the occupants is being minimized.

Response of the Fire Protection System

The first sprinkler will open over the fire about one minute after the fire ignites. Flow from this sprinkler will cause the site fire pump to start automatically. The flow alarm on the sprinkler system will activate the building’s fire alarm control panel, causing audible alarms in the building, annunciation of the fire’s location on a display, and automatic notification of the site’s emergency responders and the local fire department. Within about the next minute, an additional three to four sprinklers will likely operate over the fire, resulting in discharge of 750 to 1,000 gpm (or even more, depending on the system’s design). This is the equivalent of a master stream device operating on the fire in the building within the first few minutes of ignition. 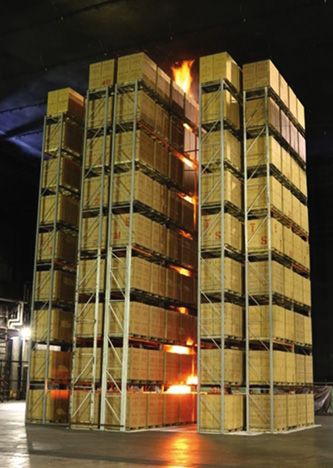 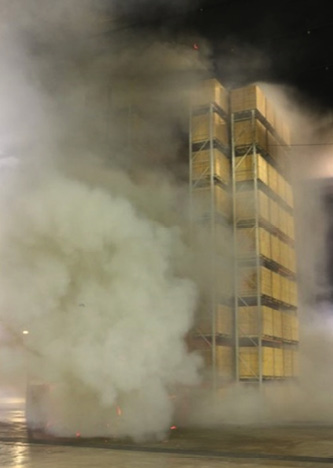 (1, 2)Early stages of fire development prior to the first sprinkler opening. (Photos courtesy of FM Global.)

Human Response to the Fire

Up to this point, the response to the fire has been automatic and mechanical—the building’s fixed fire suppression systems. Once the alarm has been sounded, the human factor enters the equation with the response of the site’s emergency organization and the local fire service agency. Actions taken by these personnel can have a significant effect on the fire’s outcome.

The first concern is for the life safety of the building’s occupants. Depending on the time of day, operating schedules, and so on, the number of persons expected to be in one of these buildings can vary considerably. The sheer size of the building and the large number of potential exits make accounting for all occupants of the building very difficult.

Smoke conditions inside the building may make a search nearly impossible; there will be little layering of smoke, as is experienced in a typical residential fire. Using thermal imaging cameras (TICs) may be necessary to search for and locate the fire. Additionally, use search ropes for the safety of firefighters. Mustering points as well as a good accountability team as part of the site’s emergency organization will also help ensure that all are accounted for. Because of the huge volume of these buildings and the quick response of the fixed fire suppression systems, the interior environment will be smoky but will likely not be oxygen deficient.

The single most important step that you can take to ensure occupant survivability and protection of the structure and contents is to maintain the water supply to the sprinkler system that is keeping the fire in check. Loss of water to the sprinklers, even if for only a brief period before the fire is completely extinguished, can result in rapid fire growth, endangering occupants, firefighters, and the building.

A good preplan for a high-challenge site needs to be a joint effort between the site’s management and the fire department. When each side listens to the other’s ideas and concerns, the plan will hopefully meet everyone’s objectives. The site personnel are vastly more familiar with the layout, building features, and fire protection equipment than the firefighters who may visit once a year for a preplan.

Some items to address in a good preplan include the following:

A preincident plan needs to be more than an inventory of equipment and building plans at a protected property; it must contain the specific actions you need to take when there is a fire in the building to ensure that the building’s protection systems are used to the best advantage and to ensure a satisfactory outcome.