Crews often view a rapid intervention team (RIT) fireground assignment as a punishment, in itself a less desirable task. If you ask firefighters, “Who wants to force doors, throw ladders, take bars, stretch lines, and lower people on a rope?” they will all enthusiastically raise their hands. But ask them, “Who wants the RIT assignment?” and more than likely no one will raise his hand. You will hear crickets, followed by some sarcastic laughs.

But why? Aren’t these tasks part of a RIT assignment? Perhaps those firefighters are accustomed to a reactive RIT operation, in which they just stand in the front yard next to the incident commander, “shepherd hooking” with their entire tool cache perfectly outlined on a tarp.

We need to change our outlook on RIT operations, stop viewing it as a “check-the-box” assignment, and start being proactive. This isn’t just my opinion; data steers my mindset. I believe that our tactics and standard operating procedures (SOPs) should be driven by data, experience, and training.

Don Abbott’s “Project Mayday” is a phenomenal resource for data-based information. It shows that RIT companies effected the rescue only 6.6% of the time. In most cases, an interior company accomplished it (self-rescue, 35.5%; victim’s crew, 26.1%; another interior crew, 25.3%).

These statistics reveal that everyone on the fireground needs to have some degree of survival/RIT training and that the closer you are to the victim, the higher the chance of rescue and survival that person will have. The faster we get in and remove the victim from the structure, the better the outcome. This is why I believe in a proactive RIT approach, in which the RIT crew is light, mobile, and fast. As a Paul Combs cartoon said, “The R in RIT stands for Rapid.”

Preventing a Mayday should be the number one priority of the RIT. We can achieve it by being proactive: softening and surveying the building, creating additional egress sites, unlocking doors, throwing ladders, taking bars or boards off windows, and so forth. Some will say that they expect their RIT members to be “fresh” and not tied up in proactive functions in case of a Mayday activation. By being proactive, the RIT crew is primed, prepared, and ready to go to work. The key is to remain disciplined and not to overcommit.

Now that we established the importance of time, how do we get faster? By training! Repetition builds muscle memory, and muscle memory develops reflexes, which in turn save time. You can also get faster by streamlining your task, eliminating unnecessary steps, and tackling multiple steps at the same time.

Let’s focus on the firefighter rescue itself. First, keep it simple! If you are activated for a Mayday and locate the unconscious down firefighter 15 feet into the structure with a relatively clear exit path, just drag the victim out! Don’t waste time and effort packaging and transfilling in a visibility-deficient environment; you can address the issues outside in a clean atmosphere. However, if you know the extraction will be prolonged due to distance or obstacles of some sort (e.g., entrapment, collapse, hoarder conditions, stairs, windows), it is crucial to troubleshoot, address any air issues (if present), and package your victim. Spending a couple of minutes addressing those steps now will save your team time and effort in the long run.

To mitigate the situation effectively, you must troubleshoot your victim’s emergency—i.e., figure out what is going on—by answering the following questions:

Is the victim conscious? If yes, talk to him! Victims are not training manikins. Determine their mental status and get as much information from them as possible. They will more than likely tell you what the problem is.

Is the victim breathing? Sometimes, it is hard to determine, depending on the fire and smoke conditions, but look, listen, and feel for air exchange.

How much air does the victim have left? Check the bottle and remote pressure gauge.

Are the victim’s face piece and regulator intact? Check them for functional and structural integrity.

Is the victim stuck or entrapped? Is he caught in a collapse, has he fallen through the floor, or has he become entrapped in a basement?

Based on the answers to these questions, identify the need for additional resources; uncover the nature of the air emergency, whether it is a high-pressure issue [universal air connection (UAC)/transfill fix], a low-pressure issue mask/regulator swap, or a buddy breathing emergency breathing supply system (EBBS); and determine the need for packaging. Troubleshooting shouldn’t take longer than a minute or so; once complete, relay the information to Command, and go to work.

When I started my career 17 years ago, we were taught to roll the victim on his right or left side [depending on the self-contained breathing apparatus (SCBA) manufacturer], exposing the UAC for a transfill. We were also taught to package the victim using his own SCBA as a harness conversion (photos 1-2). 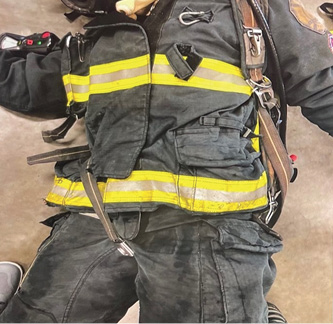 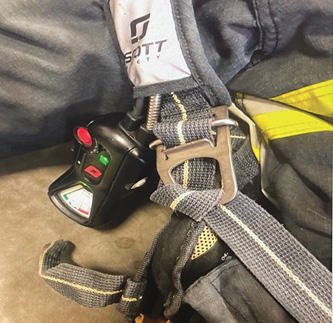 Both of these techniques work, but you have to do them separately. Attempting to tackle the airway and the packaging at the same time using the above-mentioned techniques will be counterproductive, as you will get it each other’s way.

Following are a few cons of packaging using the SCBA harness conversion. The buckle may be hard to locate with low visibility and dexterity issues if the victim isn’t wearing his waist strap or if the victim didn’t cinch both sides of the waist strap equally (photos 3-4, 5-6). Most of the buckles aren’t rated or designed for rescue. Finally, you will need to secure the shoulder straps to prevent them from loosening while dragging. 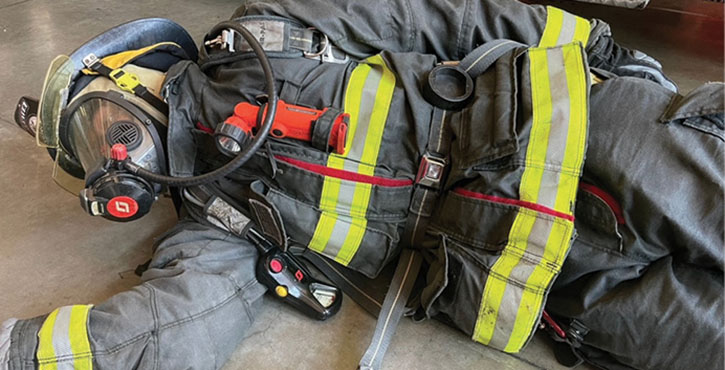 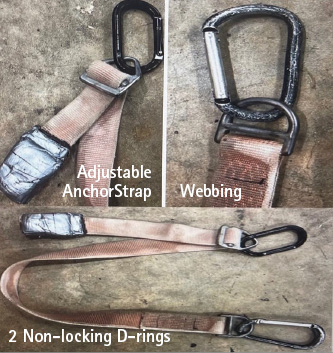 This method is faster, completely bypasses issues with the victim’s waist strap, secures the SCBA’s shoulder straps with opposing pressures, is rated for rope rescue, and adds anchor points to fasten your RIT pack to the victim in case of a low-pressure air emergency (photo 10).

In most cases, after making victim contact, we will attempt to sit the victim up instead of rolling him to the side. This position allows us to perform the airway and the packaging tasks simultaneously without interfering with one another by granting full SCBA access to the airway firefighter, who will be positioned behind the victim with full access to the entire bottle structure (valve, gauge, UAC, and so on), and full-frontal access to the package firefighter, who will be positioned in front of the victim (photo 11). Remember to prioritize the airway over packaging if the situation dictates (i.e., mask or regulator swap) or if you have limited staffing. 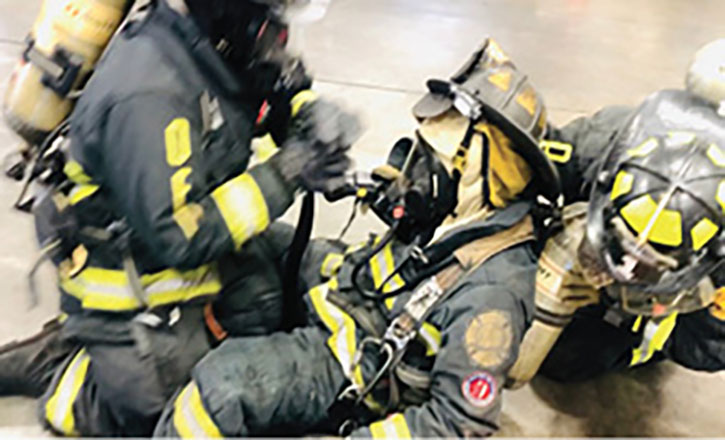 To succeed in our field, we need the following: teamwork, communication, leadership, and preplanning. There are many ways to approach a RIT operation. Don’t be a “cookbook” firefighter—understand the whys and the hows. The fire service is very dynamic; we all come from different departments with different resources, staffing levels, response times, firehouse cultures, and so on. However, we have the same mission—to protect and serve the public and each other. The answers are in our training. Put your theories and practices to the test against the clock in a controlled environment (training) and come up with a plan that works for you, your crew, and your agency.

Never stop learning. Go to conferences, read books, and listen to podcasts. The public and your fellow brothers and sisters depend on you. Take action, get better, and have pride! “Day one” or “one day”—you decide.

Bassel Ibrahim is a 17-year veteran of the fire service and a lieutenant with the Orlando (FL) Fire Department. He is a Florida Smoke Diver and a Georgia F.L.A.M.E.S graduate and teaches truck company operations, vent/enter/search, and RIT operations across the country.