Should a combination sprinkler and standpipe system (with a building fire pump) in a high-rise building be overtaxed by fire or fail for whatever reason, fire departments must be able to take over the pumping of the system with fire department pumpers to adequately supply sprinklers and/or handlines.

Improper Staging Can Set a High-Rise Operation Up for Failure

If the fire department needs to pump the system in a high-rise building, it will have to match the building pump pressure and possibly exceed it.

If the building pump should fail to provide the required pressure for whatever reason, the fire department pumper will still have to pump the system as though the fire problem is on the roof—at the highest pressure. The reason for this is simple: A building fire pump does not have the capability of controlling its engine pressure over a wide pressure range as would be needed to provide the proper pressure to all the floors in a multistory building. Therefore, the building pump is designed to pump to the highest point in the building. Because of the potential of high pump pressures in the system, there needs to be a way to reduce the pressure at the lower floors to provide the proper pressure to the handlines. This is done through a device called a “pressure-reducing valve” (PRV). The PRV is designed to reduce the building pressure to the proper pressure on the floor on which it is in service. The key point to remember about the PRV is that certain types are adjusted to provide the required pressure for a specific floor based on the inlet pressure of the valve, which will be the same as the building system pressure for that floor. If the engine pressure of the fire department pumper were to be calculated based on the fire floor elevation, the PRV outlet pressure would not be produced.

Again, the valve is designed to give the proper outlet pressure based on the building system pressure with which it is being used.

Follow this protocol when ordered to pump the system of a high-rise building:

2. Spot the pumper or pumpers that will be supplying the FDC in such a position to accommodate the following objectives:

a. Use a minimum of two discharge lines to make the connection from the discharges of the pumper to the FDC.

b. Spot the pumper with the pump panel away from the fire building to protect the engineer from falling debris.

c. Connect the discharge lines supplying the FDC to the discharges opposite from the pump panel, allowing the engineer to stay clear of the lines in the event of hose failure. Try to spot the pumper at the corner of the fire building, if possible, to keep out of the way of falling glass and debris

4. Once the fire department pumper is set up and pumping its required engine pressure, it should be determined whether or not the pumper is flowing water into the system. At any time, the pumper should start flowing water, whether it be initially after the pumper goes into operation or at any time during the incident; if the firefighters inside request more pressure, immediately PUMP THE SYSTEM PRESSURE.

After the initial hookup, command should be told whether or not the pumper is flowing water and also if water should start flowing at any time during the incident. NOTE: If additional pressure is needed past what the system pressure can provide and a higher system pressure will make the difference between failure of the suppression operation and successful extinguishment, a preplan of the building should indicate what the maximum pressure can be. If that is not known, the following rules shall apply:

NOTE: Even though all building systems have been tested to the maximum pressures just listed, there is a possibility that some systems, especially older ones, could have a failure under any pressure, including the higher range.

6. If there is an actual fire, request additional pumpers to duplicate the original pump operation using the unused inlets of the FDC. This will provide reliability for supplying the system as well as additional gpm if needed. The clappers in the inlets of the FDC that are not being used can leak under pressure, which will cause pressure buildup in the inlet if the cap is left on. This can be a problem for firefighters trying to remove additional caps to add more lines to the FDC. For this reason, remove all caps from the FDC before the initial pump operation is set up.

An alternative method for providing reliability to the pump operation is to add an extra engine in the primary pump operation. If a single engine is all that is needed to create the system pressure, add a second engine in series for backup. If a series operation is initially set up, add an additional engine, again for backup.

7. Pumps need to circulate water to keep from overheating. If the pumper is throttled up but is not flowing water into the FDC, open an unused discharge and its corresponding drain valve. This should flow enough water to keep the pump cool.

A statistic chart can be developed to show all building system pressures including the system churn pressure, the fire department starting engine pressure (50 psi below churn pressure), and maximum allowed engine pressure. This chart (a local example is shown below) should be placed on all engine companies that respond to the high-rise districts.

Because of all the restrictions and limitations in the fire protection system of a high-rise building, required pump pressures can be in excess of 250 psi. These high pressures can be very hard for a single pumper to accommodate even when connected to a good hydrant. It is for this reason that a series pump operation is established.

Series pumping is actually a short-relay pump operation in which the pumper taking water from the hydrant pumps into the intake of the second pumper. The second pumper boosts the pressure even higher. This method is used when pressures higher than the capabilities of a single pumper are required.

Series pumping is based on the principle that allows the centrifugal pump in the fire department pumper to take advantage of incoming pressure and actually boost the pressure and capacity of the pump itself without requiring an increase in horsepower by the engine turning the pump.

When two or more pumpers are pumping in series, they divide the overall required pressure to supply the system between them, which means each pumper only has to do part of the work. For example, if the required system pressure is 300 psi and two pumpers are involved in the series pump operation, each pumper will only have to pump 150 psi. 150 plus 150 equals 300 psi. This type of operation allows the pumpers to operate at a safe rpm range and also allows for an increase in flow.

As a rule of thumb, a pumper should be added into the operation for every 250 psi. The following procedures should be followed for a series pump operation. On confirmation of a fire, the first pumper on the scene will establish a minimum of two discharge lines into the FDC. The lines will be connected to the discharges away from the pump panel and as straight as possible into the FDC. When making the connections to the FDC, make sure all of the FDC caps are removed, even the unused ones. Clappers in the FDC can leak water, which under pressure can make the caps hard to remove if additional inlets are needed.

When the next pumper arrives, discharge lines should be connected from its discharges to the first pumper’s intake. Repeat this procedure with any additional pumpers that are added to the operation with the final pumper also making the connection to the hydrant. If large-diameter hose (LDH) is to be used for the discharge lines between the pumpers, only one per pumper will be needed. The maximum discharge pressure can be no higher than the rating of the hose.

After pump pressures have been calculated, the engineer at the pumper at the hydrant can charge the discharge line to the next pumper in the series. The discharge gate should be opened slowly, allowing the line to fill completely with just hydrant pressure. Repeat this procedure for all additional pumpers in the operation as soon as they receive water. When the pumper at the FDC receives water, the engineer can charge the discharge lines to the FDC under low pressure. When all lines are charged, the engineers can then slowly throttle up to the required pump pressure. 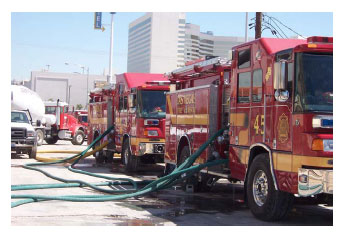 Most pumpers also have built-in pressure dump valves on the steamer intake pipe which needs to be dealt with if over-pressurized. The easiest way to do this is to cap off the dump port with a 2 ½-inch cap. The dump port will have a label on it that says “do not cap;” If the port is capped, the dump valve will not work. That is exactly why we are capping it. Capping it will not damage the dump valve. 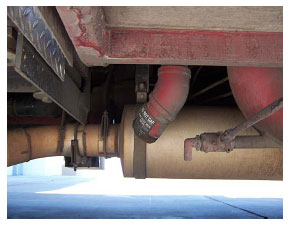 The high system pressures created by taller buildings can require pressures higher than what the standard hose can be used at. Most of the 2 ½-inch and 3-inch hose in service today has an annual service pressure of 400 psi. A smaller percentage of hose has a 300-psi service pressure. The National Fire Protection Association (NFPA) says that the maximum allowed operating pressure for hose should be approximately 10 percent less than the annual service pressure. So what does this mean? The 400-psi test pressure hose can be operated at 360 psi and the 300-psi test pressure hose at 275 psi. Always consult with the manufacturer to determine what is safe for their products. Here are some examples: 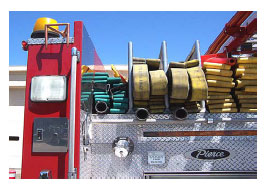 This engine is equipped with high pressure 2 ½-inch hose on the left capable of a 600-psi operating pressure.

Paul Shapiro is director of Fire Flow Technology. He is a nationally recognized instructor on large-flow water delivery. He is also a retired engineer from the City of Las Vegas (NV) Fire Department. He has authored numerous articles for fire trade magazines. He has been in the fire service since 1981 and is author of Layin’ the Big Lines and produced the first in a series of videos on large-flow water delivery. He is available to answer questions; he can be reached at (702) 293-5150 or Layinline @aol.com.