Firefighters across the country could be called to respond to an incident in which an individual is unable to remove a ring stuck on a finger (most common) or elsewhere on the body. How would you respond? What equipment would you use? Have you preplanned for such a call? For a successful outcome, you must follow a systematic approach.

First, do you have a machinery extrication kit on your apparatus? A simple and compact kit can get you started in your operations and may even resolve most ring-entrapment calls. A “Man vs. Machinery Kit” can be put together in a hard case plastic toolbox or in a durable canvas bag (photo 1). The kit should include the following:

These items are easily attainable and are greatly helpful in a variety of ring-removal tactics.

The most common materials found in the rings most commonly worn by men and women are soft gold, tungsten, titanium, sterling silver, and stainless steel.

Be prepared for the worst-case scenario. Have a potential game plan based on the information you receive at dispatch and en route to the emergency site. The machinery extrication kit will be helpful in most operations. If additional tools are needed, the initial operations team can request that they be brought to the area of operation. Walking into a location with “everything but the kitchen stove” may cause the victim to become upset or panicky. First responders on scene can send to responding units a photo of the problem area taken with a cell phone so they will have a good idea of what they will be faced with when they arrive on scene.

Most likely, the individual with the stuck ring did not call for a fire/rescue response. Many people wait several hours or even days before they decide that they need our specialized services. The ring may be stuck on a finger or another part of the body. Some of the unusual ring removals we have responded to involved rings placed on sensitive parts of the body out of curiosity or for religious/medical reasons. The actions of the first responders on scene will reflect on the entire organization. Handle sensitive issues professionally and with minimal personnel to avoid psychological discomfort for those involved.

Also, the ring involved may be a family heirloom. Start with the most noninvasive procedures before moving into a cutting operation. All attempts to remove the ring should include salvaging the ring so that it may be repaired. The public relations value of these tactics could be priceless to your organization.

If you find that the person has had a ring stuck on the finger for several days, first try to remove the ring using cold water followed by a lubricant.

Cold water may reduce the swelling in the finger. Simply placing the victim’s hand under cool water or in a basin of cool water may reduce the swelling enough to enable you to extract the ring. My experience has been that some victims have attempted to remove the ring well before we were called and may have hampered the removal process even more. In such cases, the finger is severely swollen. A mild lubricant may be your next course of action.

Lubricants may be used to help remove the ring. Applying a mild soap solution to the finger and working it in around the ring may free the ring. Water-based lubricants or nonpetroleum jelly has also been used successfully.

THE RUBBER BAND OR NONREBREATHER TRICK

I have had a 90-percent success rate in removing rings using a rubber band and a simple soap solution. Break a medium-size rubber band and work it under the ring. It may be easier to gain access from the palm area or the side of the finger (photo 2). The rubber band can be passed through using a butter knife, a shim, or even the cap of a ballpoint pen. Anything that is small and can be used to gain access is acceptable. 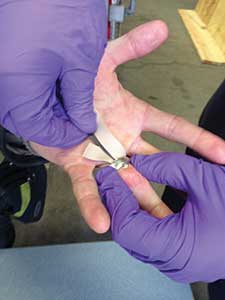 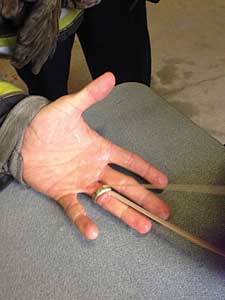 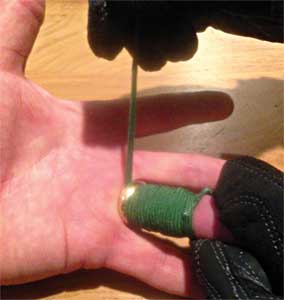 Several tools on the market are said to aid in removing a ring stuck on a finger. The Emergency Ring Cutter (photo 5) has been around the fire and emergency services for many years. One problem with this device is that it will not work on most rings. It works well with rings made of a soft metal such as yellow gold. It will not cut rings made of tungsten or titanium. Also, the blade on this cutter becomes dull quickly, and the turning mechanism strips easily when too much turning force is applied. 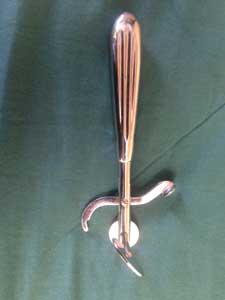 “The Ring Cracker” (photo 6) is a new addition to our removal tool cache. It will crack tungsten and ceramic rings while on the victim’s finger without causing additional injury. The device applies pressure to the ring, not to the patient’s finger. The compression applied allows the ring to break or shatter. Eye protection is required when using this device. Locking pliers have also been proven to perform the same task as the ring cutter. 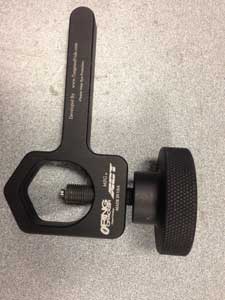 When all other options have failed, you may have to remove a ring with a power tool such as a hobby saw or an air-actuated rotary saw. Be sure to secure the patient’s hand to prevent unnecessary movement. You can secure the hand to a splint board, or a fellow first responder can hold it in place.

You can use a butter knife as a shim to protect the victim’s finger from being cut by the saw. Slide the shim under the ring where you will be making the cut. For our machinery extrication kit, we have ground down several butter knives to various widths for use in different situations (photo 7). You can flatten and use tablespoons and teaspoons to protect the palm of the hand during the extrication (photo 8). Use a cooling agent to prevent the ring from getting hot and burning the patient. You can use a 16-ounce water bottle with a “sport pop top” or an IV setup of saline solution as an irrigant. You can use the IV drip line as a hose to maintain proper cooling of the ring surface. You can obtain expired saline IV setups from emergency medical services personnel. They are a great addition to the machinery extrication kit. 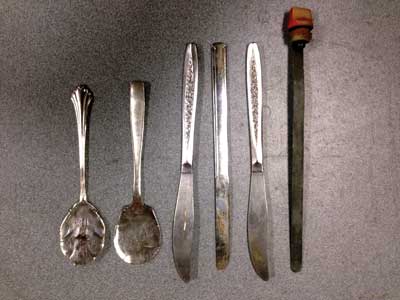 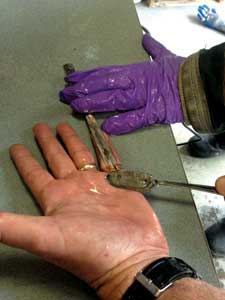 In my experiences, the miniature hobby saw with a circular carbide blade (photo 9) has been extremely successful in removing rings. The benefits of this device are its compactness for easy handling, its variable speeds for better control, its availability in a battery or an electric version, and its precision. In drills we have performed using a variety of brand name tools, we usually removed the rings in under a minute. This, of course, depends on the type and thickness of the material we are cutting. 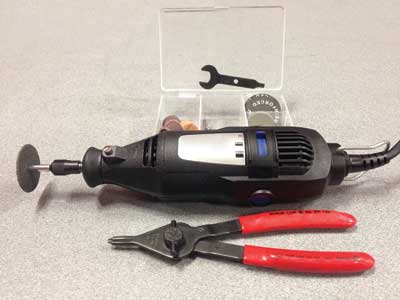 Many rescuers still depend on the air-actuated rotary saw for removing rings (photo 10). Although this tool is an option, the size of the blade (4½ inches) and the sensitivity of the air-actuated trigger can make it difficult to operate with it. The sound of the tool operating (similar to that of a dentist drill) may also have a detrimental psychological impact on the patient. 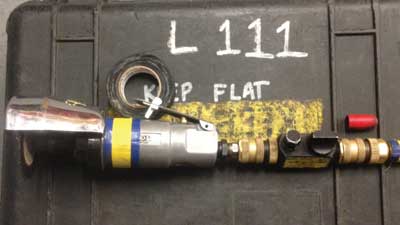 Removing the ring should take no more than several minutes. Proficient rescuers have successfully removed rings in under 60 seconds. Ensure that the shim (butter knife) and spoon are in place (photo 11). While cooling the area with water, apply the saw to the center portion of the ring. Do not rock the saw back and forth. Remember, the surface area is not wider than the cutting blade. Allow the blade to work itself into the material. Constantly monitor the area for heat. Once you have cut through the ring, insert a pair of snap ring pliers into the cut to open the ring further for removal. In some instances, you may need to make an additional cut. 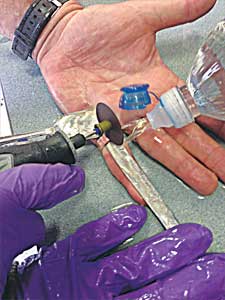 All responders should practice techniques for removing rings. Always size up the situation, and do not overlook the easy removal methods. You can drill on these methods in your firehouse kitchen using a carrot to simulate a finger and a small section of copper pipe. A “10 Minute Drill” today could lead to a successful operation tomorrow.

Start with the most noninvasive procedures before moving into a cutting operation.

MARK D. GREGORY has more than 28 years of firefighting experience. He is a captain in the Fire Department of New York (FDNY), where he is assigned to the 13th Division. He was a lieutenant in Tower Ladder 111 for 11 years; other previous assignments include Brooklyn’s Rescue 2 and Ladder 132. He instructs for the FDNY Academy as an Annual Education Day, flashover, and extrication instructor. He also instructs at the Suffolk County Fire Academy and is the lead instructor for FDIC’s H.O.T. Program “Man vs. Machinery,” taught by P.L. Vulcan Fire Training Concepts LLC.