Structural fire suppression is unique in the work-a-day world because it requires that workers bring their own breathing air (not pure oxygen) to the work site. Atmospheric air is 20.9 oxygen and 78 percent nitrogen, and the balance is 0.03 percent carbon dioxide (CO2) and other trace gases. We extract oxygen from the air and replace it with CO2 and some water vapor in our exhalation.

As the physical demands of activity increase, our respiratory rate (breathing frequency or number of breaths taken per minute) and volume also increase. This is called tidal volume, expressed in cubic centimeters (ccs). At rest, this volume might be a few hundred ccs. Just as a truck engine’s output is related to its displacement-i.e., the volume swept by all the pistons in all the cylinders-so, too, our physical size plays a large part in energy generation and the ability to extract and metabolize oxygen from increasing volumes of breathing air. The amount of air turned over in a minute is called minute volume.

Why Not Breathe Pure Oxygen?

In a healthy pulmonary system, we are able to use our blood’s oxygen-carrying capacity at nearly 100 percent with ambient air. It is only at extreme altitudes (or with pulmonary disease) that it becomes necessary to increase the percentage of oxygen in the air we breathe to compensate. Although pure oxygen is not explosive, it will increase flame spread and lead to open flames where there are smoldering embers. With increasing altitude, the percentages of gases remain the same, but the ambient pressure to help push the gases across cell membranes is lessened. The altitude effects are not significant until you reach approximately one mile above sea level.

Under peak exercise loads, differences in respiratory efficiency become evident. Well-fit individuals can sustain higher workloads for protracted periods of time. The aerobic capacity defines the differences; efficiencies start at the cell level. Putting stress on the body creates the adaptation that allows the generation of more units of energy (or work) with correspondingly less oxygen. Improvements in fitness (physical work capacity) do not happen by accident. To produce results, workouts must be regular (periodic), sustained (duration), and of a type (intensity and specificity) to produce improvements. We need to move out of our comfort zone (resting state) for adaptation to take place.

When we start our car, the stored energy from the battery provides the energy to get the system going. Our bodies also store energy, and that energy is available immediately, without oxygen. This is the anaerobic system (meaning without oxygen), whereas to keep the engine running, oxygen (aerobic metabolism) must be constantly supplied. Virtually all human tasks can be reduced to units of work and expressed as watts or calories-a unit of heat. Using one liter of oxygen will produce approximately five kilo-calories of heat (energy). Every firefighter has a definable maximum or redline. No one can sustain peak output for more than 45 seconds. But well-conditioned firefighters can work at higher intensities over longer periods of time. Sedentary people can barely sustain 50 percent of their maximum capacity for very long, whereas highly fit individuals can approach 70 percent of their maximum for much longer periods. In general, much of firefighting is characterized as short bursts of high energy. Exceptions are climbing under load, one of the hardest things that firefighters must do.

Amazingly, firefighters run into burning buildings every day with little hesitation or thought that, without their self-contained breathing apparatus (SCBA), death would be likely. Huge improvements in respiratory protection over a century-whiskers saturated with water used as filters, filter masks, the chemical rebreather, the negative-pressure SCBA, the present positive-pressure units-all have contributed to a safer and more productive working environment. 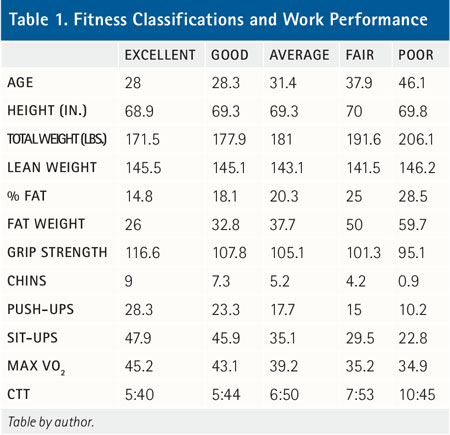 However, SCBA has its limitations. The SCBA is the heaviest single component of personal protective equipment (PPE). With the use of lightweight fibers and composites, an SCBA now weighs around 20 pounds, whereas the steel cylinders of the past century weighed more than 40 pounds. This weight cuts into the “overhead” that’s added to the unloaded bodyweight. When you put on your PPE next time, step on the scale. You’ll likely be surprised that you’re suddenly 50 pounds heavier, and you haven’t picked up the first piece of equipment. You support and move this mass. If that movement is up a ladder or stairwell or in a crawl, the energy cost becomes severe. Only the most fit individuals will be able to perform adequately after climbing the stairs at a high-rise fire. The SCBA also adds an additional cost to the act of breathing. Studies of respiratory dynamics have shown that simply putting on a face piece without a regulator affects breathing dynamics through anxiety.

Your physical size has a lot to do with how long your air supply will last. Figure 1 illustrates the consequences of physical size. Even controlling for percent or relative body fat, your physical size tells a lot about your ability to perform sustained physical activity, since larger firefighters carry a disproportionately smaller percentage of external weight. You might think of this as power:weight ratio. The more the lean body mass, the less the impact of the load. But remember, this added mass requires more ventilation. The rate at which two people of different size at rest breathing from a 30-minute bottle will empty the cylinder differs widely.

A case of the “nerves” can accelerate the breathing rate, and the “efficient” breathers can extract more oxygen per breath, which is measured by capturing and analyzing the percentage of CO2 in the expired air. There are several ways that you can make your air supply last longer.

Finally, you can’t control your height, but you can change your body composition. How does this help? An examination of Table 1 tells the graphic story as to how body composition can have a severe impact on performance.

In a Federal Emergency Management Agency-funded study, 100 randomly selected firefighters (by age and department) were tested at the Human Performance Laboratory at the University of Maryland. Measures included body composition and aerobic and muscular fitness. The data were then compared to the time to complete a self-paced set of job-related fireground tasks (the criterion task test).

There was little variation in the lean (fat-free) body weight across the five fitness categories-excellent to poor. But as the adipose (fat) tissue steadily increased, so did the time to complete the tasks. Note that the increase in body fat, not surprisingly, increased with age. However, this is not to say that age was the significant determinant because there were both older firefighters in the Excellent group and younger firefighters in the Poor group. The firefighters in the poor category were carrying the equivalent of an extra SCBA under their skin in the form of adipose tissue.

It’s a simple matter of physics. All mass takes energy to move, whether it’s strapped on your back or part of your body. And, because fat is metabolically inactive, it makes no contribution to the creation of energy but actually costs you in your ability to perform.

PAUL O. DAVIS is a fellow of the American College of Sports Medicine and the director of the First Responder Institute. He served for 13 years as a Montgomery County (MD) firefighter/paramedic.

Mayday: Are You Prepared If It Happens To You?