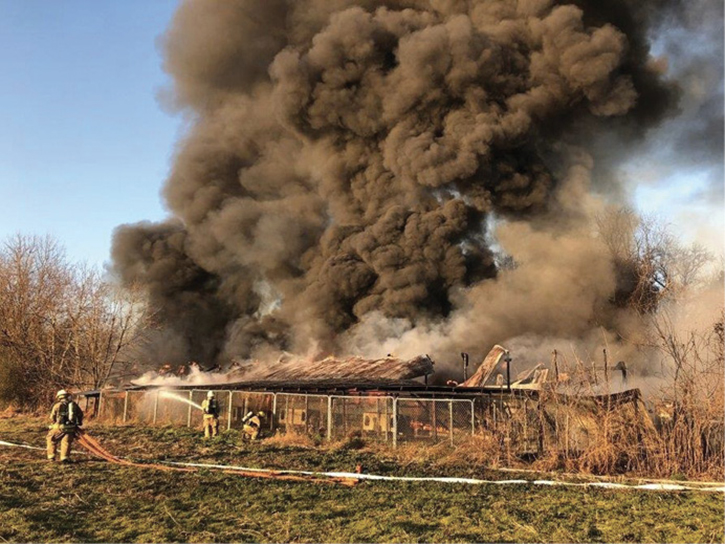 On February 6, 2019, Suffolk (VA) Fire & Rescue (SFR) was presented with a challenging fire involving a large building with multiple animals reported trapped. Agriculture buildings store and house products and materials that are combustible and hazardous such as straw, grain, and fertilizers. These buildings also house large vehicles such as trucks, combines, and tractors that support planting and harvesting crops. Most importantly, these buildings house living animals such as cattle, horses, chickens, and dogs. Because of the animals’ size and the equipment used in farming and agriculture, these buildings are large. Responses to these buildings are often complicated by their design; the construction materials used; the distance off the road that leads to access problems for fire apparatus; a lack of municipal water supplies; and the lack of alarm, detection, and suppression systems in the building (photo 1).

Large Animal Rescue: Are You Prepared? 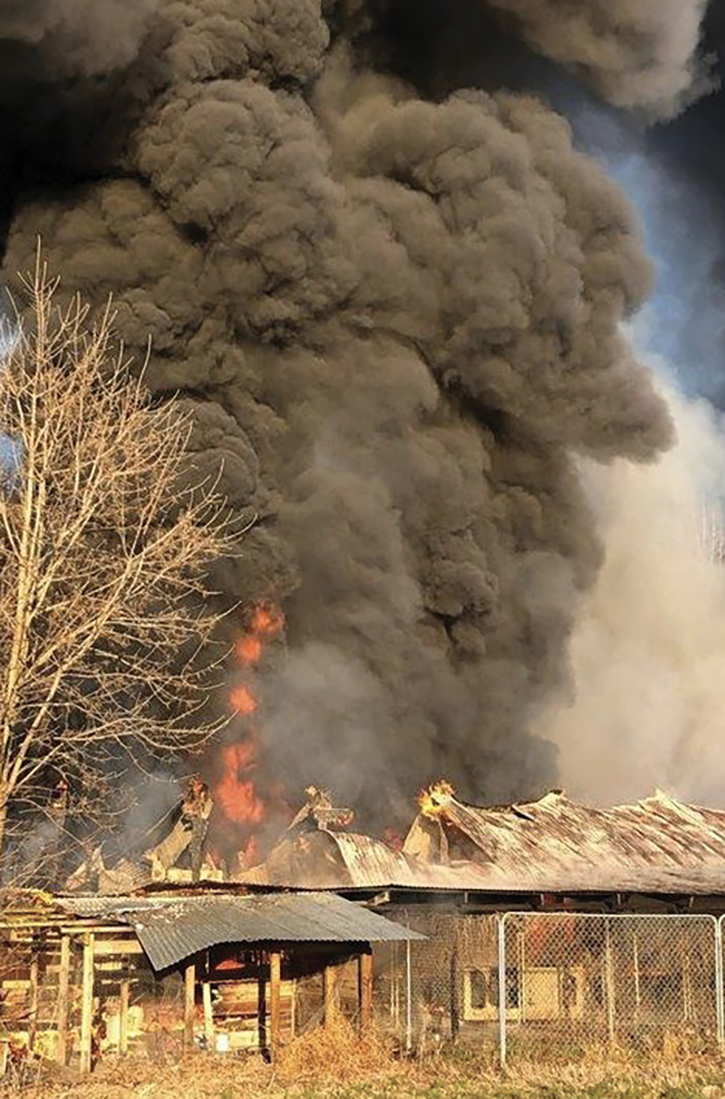 (1) Fires involving agricultural buildings are challenging because of location, the types of materials stored, construction techniques, and lack of suppression systems. (Photos by author.)

Because of hazard classification, these structures are rarely preplanned. National Fire Protection Association (NFPA) 1300, Standard on Community Risk Assessment and Community Risk Reduction Plan Development, was released in 2019 and provides guidance and expectations with regard to the hazard classification and prefire planning expectations, yet these buildings are not routinely identified or prioritized as a risk. In addition, many agriculture-style buildings were built prior to the establishment of minimum requirements for the design; construction; fire protection; and classification outlined in NFPA 150, Standard on Fire and Life Safety in Animal Housing Facilities. NFPA 150 establishes life and safety requirements for humans and animals in all types of animal housing facilities where animals are kept for any purpose.1 Structures covered include barns, stables, kennels, shelters, zoos, and veterinary facilities. The NFPA 150 initial draft and technical committee report date back to 1979, when the focus was placed on racetrack stables.2

At 0723 hours, emergency communications dispatched Engines 5, 10, and 25; Ladder 5; EMS 1; Medic 10; Rescue 1; and Safety 1 to a reported commercial structural fire. A passing motorist had called 911 with a report of heavy smoke in the area of Nansemond Parkway and Shoulders Hill Road (photo 2). 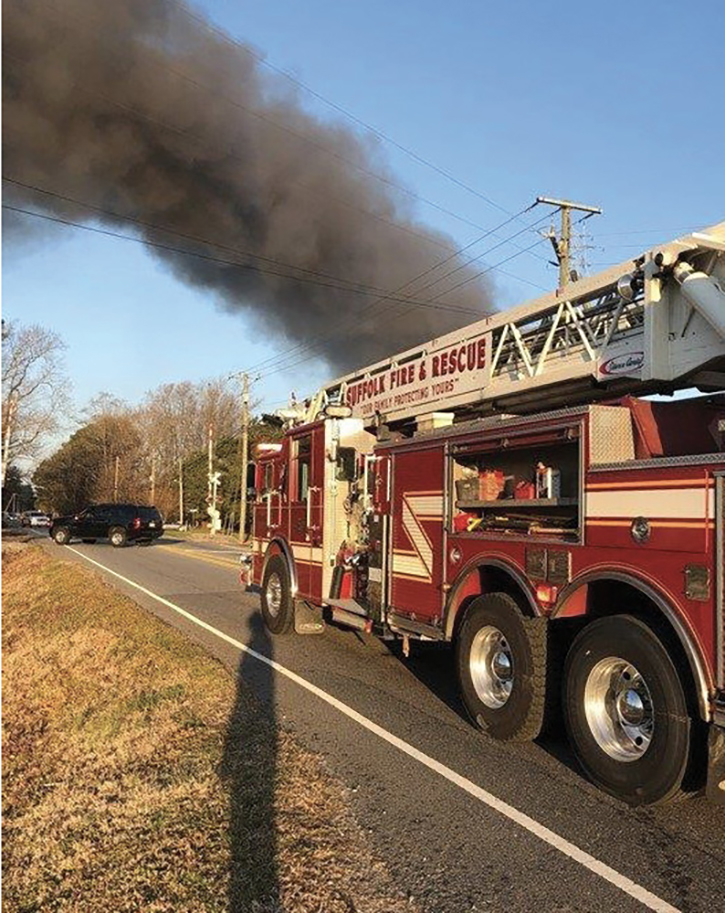 (2) A motorist notified 911 when he saw a large smoke column in the area. Because of the distance off the road, first-arriving units were unsure of what was on fire until they made their way down a long dirt road.

Three minutes after the dispatch, Car 5 arrived and updated the address to 5150 Nansemond Parkway and reported a working fire. Engines 5 and 10 arrived shortly after Car 5 and confirmed a 170- × 52-foot barn was well involved off the main road. Battalion 2 arrived and established command. Battalion 2 then requested Tankers 1 and 9 when Car 5 advised heavy fire conditions with an unknown water supply because of the distance off the road. Engine 10’s officer directed the operator to progress down a long dirt road to get as close to the structure as possible to allow handlines to reach the structure. As Engine 10 positioned to gain access to the structure, Battalion 2 established command and conducted a face-to-face with Car 5 (photo 3). 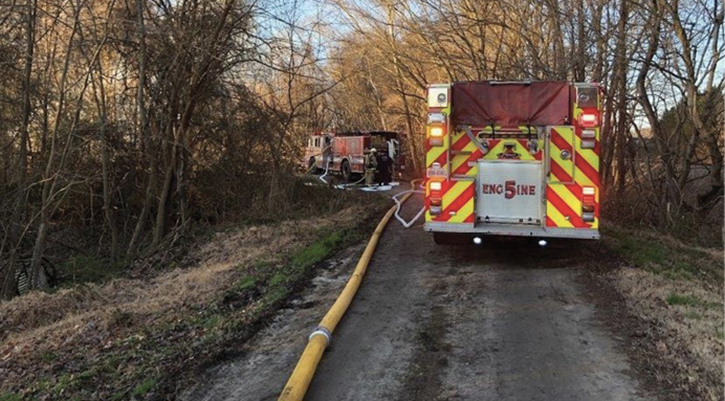 (3) Engine 5 and Engine 10 positioned on the narrow dirt roadway.

The fire conditions were well advanced, so the initial action plan was for defensive operations. Engine 10 reported heavy fire involvement in most of the barn that was also spreading into the dog pens. Engine 5’s officer directed the operator to follow Engine 10 down the dirt path to send Engine 5’s tank water to Engine 10 as the water supply was being assessed.

Command directed the first line in operation from Engine 10 to protect the dogs trapped in the pens. Engines 5 and 10 placed two 1¾-inch handlines in service and initiated an exterior attack at the Alpha and Bravo sides of the agricultural building. Engine 25 backed down the long dirt driveway where Engines 5 and 10 were located, and the operator performed a reverse lay to a hydrant that was 800 feet away from Engine 10 and established the water supply (photo 4).

(4) Initial hoselines were placed to protect 24 hunting dogs that were unable to exit their pens. Ladder 5’s crew worked to free the dogs as Engine 10’s crew protected them with a hoseline.

Because of the barn’s size (9,000 square feet) and its remote location off the gravel path, the two initial handlines were unable to reach more than halfway down the Bravo side of the building. The handlines were placed to protect the many hunting dogs trapped in their pens and biting the perimeter fencing trying to escape the heat and fire. Engine 10’s crew directed its streams to protect the dogs while Command ordered Ladder 5’s crew to cut the perimeter fencing and allow the dogs to escape the fire (photo 5). 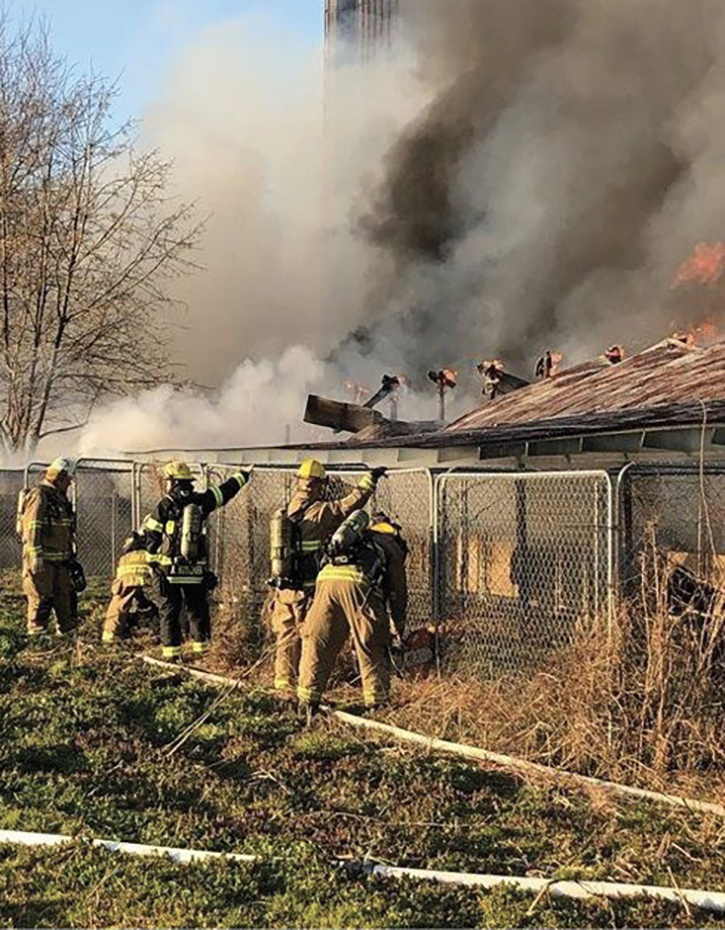 Ladder 5 immediately reported to the Bravo side, where Engine 10 was performing forcible entry through the fencing to allow the dogs to escape the burning barn and pens. Because of the heat, Engine 10’s crew protected Ladder 5’s crew as they worked saws to gain access to the dogs. Once the dogs were extricated from the burning barn and pens, the handlines were directed to extinguish the fire.

Once Rescue 1 arrived, command assigned the crew to gain access to all the gates and fencing that surrounded the building so crews could better access the building for fire attack with handlines. After the animals were rescued, Command ordered the continuation of defensive operations because of structural collapse concerns. In addition to the initial 1¾-inch handlines placed into service by Engine 10, a garden line was pulled to the Bravo/Charlie corner, and two additional handlines were placed in service by Engine 25 and Ladder 5 to control the fire.

After the fire was under control, Command requested Ladder 6 to fly the department’s drone to provide the fire investigators and Command with an overhead view of the fire scene. While fire investigators determined the origin and cause, the property owner brought an excavator to the scene to allow firefighters and fire investigators to safely gain access to areas of the building for overhaul and cause and origin determination.

Sixteen adult hunting dogs and eight puppies were determined to be on site in the fenced kennels adjacent to the barn. Because of the coordinated actions of well-trained and well-equipped firefighters and officers, many dogs were saved from the rapidly progressing fire. Twelve dogs were found deceased in various locations of the building after searches were completed. The fire was caused by heating lights and lamps in the dog pen area that kept the animals warm in the winter.

Following were some lessons the SFR learned postincident:

Community risk reduction. Over the past several years, the fire service has adopted the philosophy of “community risk reduction.” This movement is centered on the desire of suppression crews and fire prevention bureaus to understand where hazards and risks are in the community. Understanding risk is unique to each individual department and first-due area. Each area or community is unique and, as such, each department must develop “priorities” to meet the needs of its community.

With regard to this fire, the building was well off the road, with limited access. The building housed many dogs and, because of cold temperatures, heat lamps were used as heat sources to keep the dogs warm. The building also stored many large farming vehicles; once a fire occurred, with no fire or smoke detection devices that were monitored remotely, the fire went undetected until passing motorists were able to see the smoke column.

Based on the new philosophy of community risk reduction, learn what structures are located off main roads, walk dirt roads to determine access points, and plan for long supply line lays or tanker operations before the event. Also determine if any livestock or working animals are housed in structures so you can forecast rescue plans.

Forcible entry techniques are not limited to doors and locks. With regard to outbuildings and agricultural structures, forcible entry will be necessary on nontraditional materials. In this case, crews needed to defeat chain-link fencing and wire that contained dogs in a pen to allow the dogs to exit the burning structure.

The dogs were gnawing at the wire and chain-link fencing to get away from the intense heat and smoke. During training, emphasize working saws and other hand tools that allow an exit point for animals.

Have a water supply in transitional areas. The use of water mains and municipal water supplies is desired, but they are not always available when fires occur off paved roads. It is essential to have a tanker task force readily available for fires that occur even in hydranted areas of a city or county.

For this fire, the tanker task force was called for early, but because of the distance, the tankers were positioned away from the fire scene. If tankers were required, the incident action plan would have been different to optimize the booster tanks on all the first-arriving engines.

Require your department to train on and understand how to conserve water when working away from the roadway so the hose streams you select and place in the most optimal locations can facilitate search and rescue. Doing the most with the water on hand while laying extended supply lines or summoning a tanker task force to provide a continuous water supply is an art.

MICHAEL J. BARAKEY (CFO) is a 27-year fire service veteran and the chief of Suffolk (VA) Fire & Rescue. He is also a hazmat specialist, an instructor III, a nationally registered paramedic, and a neonatal/pediatric critical care paramedic for the Children’s Hospital of the King’s Daughters in Norfolk, Virginia. Barakey is the participating agency representative and former task force leader for VA-TF2 and an exercise design/controller for Spec Rescue International. He has a master’s degree in public administration from Old Dominion University and graduated from the National Fire Academy’s Executive Fire Officer Program in 2009. Barakey authored Critical Decision Making: Point-To-Point Leadership in Fire and Emergency Services (Fire Engineering), regularly contributes to Fire Engineering, and is an FDIC International instructor.