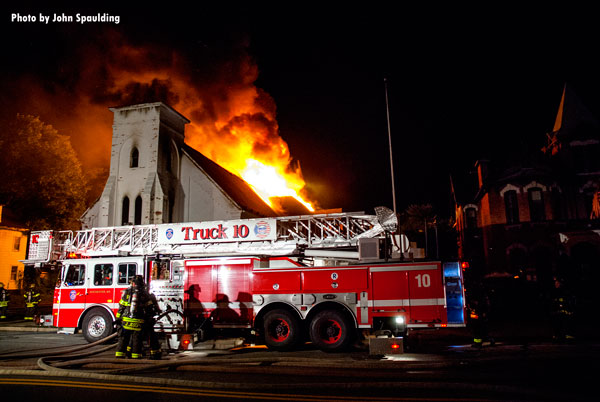 Story and photos by John Spaulding

The Rochester (NY) Fire Department was dispatched at 01:00 hours for multiple reports of a church on fire. The first-arriving company found fire on the C side and declared a working fire. This secured the channel and instituted a restricted alarm.

The first-arriving chief struck a second alarm due to the size of the structure. Companies started to make progress on the single-story addition in the rear when the fire broke through the roof of the sanctuary. After a water main break was discovered, a third alarm was called to support the master stream operations on all sides in addition to the three quints using elevated master streams.

The owner of the building was on scene and was more concerned for the building to the east, which is historic as well. It is reported that President Rutherford B. Hayes had stayed there and a new roof was just put on last year. Marvin Maye, who owns the building with his wife for the last four years, is no stranger to press over the once-German church built in 1870. They bought the property and the abandoned dwelling to the west to raze for a Dollar General store, which was highly contested by preservation societies and boards. Last night he stated that “they want to save the building, but no one has the money to do it.” He later added that the building is frequently broken into even though it has red placards posted on it. He also said that there is asbestos in the building and the floors are in bad shape.

The third alarm brought more than 65 firefighters and support staff to the scene and at least 11 pieces of equipment. The city brought in mutual aid from county companies to cover other calls for service.

One firefighter was treated for heat exhaustion. No other injuries or damage was reported. The structure will now have to be razed, according to Deputy Chief Stadler. The fire took four hours to control. Every hydrant in a three block area was being used and thousands of feet of hose lined the street as the sun started to come up in the early morning hours.

There were separate reports of a man running from the building prior to the calls to 911.The Rochester Arson Task Force is investigating the cause and origin and leads provided to them. The owner confirmed that there were no utilities to the building in recent years.

Four Dead and One Unaccounted for After East Orange (NJ) Fire