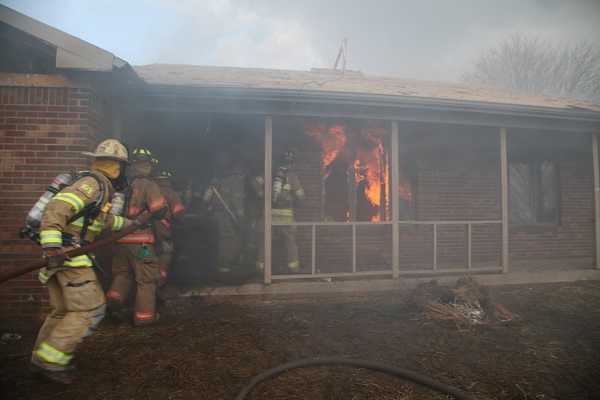 Firefighters develop both good and bad habits, from their first tour of duty until their last. Usually, these habits are the result of repeating a course of action that has been successful during previous incidents. Because most of our “bread and butter” fires occur in single and small multidwellings with numerous points of ventilation and egress, some firefighters may develop complacency for the limitations of their air supply and lack of awareness of egress points.

This lack of awareness may cause life-threatening problems when firefighters are faced with incidents of prolonged zero visibility because of heavy smoke conditions in occupancies that are large in size, complex in layout, or provide few openings for egress or ventilation. The following points of awareness are important while operating at all fires, but they become crucial when members are working at incidents of prolonged zero visibility or limited options for egress.

To establish the mindset that will lead to a safe operation in a prolonged zero-visibility environment, firefighters must first identify the potential hazard. A number of occupancies may come to mind such as a warehouse, an industrial building, or a retail superstore. Although these buildings are likely candidates for limited entry and egress, large/complex layouts, and difficult ventilation scenarios, you may overlook more common occupancies in some jurisdictions.

A cellar fire private dwelling or a fire in any occupancy with boarded windows may create an environment that is difficult to vent and presents challenges to egress. Members operating in these situations must realize that it will take time to remove all the window covers and heat, and smoke may not readily lift from belowgrade fires. Also, even small scale commercial occupancies may feature layouts that are time consuming and confusing to navigate.

Robinson on Wayfinding in Zero Visibility

Orientation to egress must begin immediately on arrival at the incident. Conduct exterior size-up for doors and windows, security bars, gates, or boarded up windows prior to initial entry. Note the location of any opening relative to the suspected seat of the fire and configuration of the building for use during fire attack, to plan entry, and as a possible urgent withdrawal.

Maintain continued orientation to egress points throughout interior operations. Engine company firefighters have a hoseline to follow back to their original point of entry. However, if that option is the only means of escape, give special attention to keeping that path available at all times. You can position an additional hose team at a key stairwell or corridor, and you can station a member at the entry point to monitor conditions. Firefighters performing searches must maintain extra vigilance to note the location of the nearby engine company or other units. In addition, they must be sure to communicate any additional points of egress or areas of refuge they encounter during the search. Further, all units must maintain company integrity do not allow any member to lose contact or stray from the path of the search or hoseline advance.

Location and the Extent of Fire

Although monitoring the location, extent, and likely path of fire spread are always high priority orientation points during a firefight, the importance of this information is magnified when the options for rapid withdrawal are limited and the visibility may remain at almost zero for the duration of the active firefight. In many structures common to prolonged zero-visibility fires, companies that make errors in judgement such as passing fire or losing track of the route of spread and extent of fire may find themselves cut off with no viable means of escape. Company officers must factor in the conditions at hand with “sit-reps” from other units and updates from command, then use their best judgement based on the access/egress profile when committing to operations deep into this environment.

With the ever-growing awareness of how ventilation affects fire spread, all companies operating at a prolonged zero-visibility fire must evaluate how their actions may affect the growth or suppression of a fire. In scenarios with limited ventilation, allowing an opening to remain uncontrolled without adequate water applied to the fire may cause a rapid increase in fire intensity and direction of travel toward that opening. This scenario could be disastrous for the first-in engine and truck making their way in from that point to begin fire attack and search operations.

While the stretch is being made, you must control and monitor the ventilation (often the same as the egress point). Also, make preparations for staging a line at that point, in addition to the standard backup line that follows the attack line. If the initial access point will serve as the only point of ventilation for an extended period of time, coordination with the fire attack company is crucial before this access is allowed to remain open. This path must also remain as clear as possible for rapid withdrawal of interior units.

Firefighters operating under the current air management standard are more keenly aware of ingress, work, and egress time than in the past. However, the price for abandoning sound air management principles is often the highest is prolonged zero-visibility incidents. Members may not be experienced operating remotely from exit points under heavy smoke and/or high-heat conditions. Training and discipline at the company level are required to ensure units remain together and begin to exit the hazard area with a proper duration of air supply. Incident commanders must also recognize this drain on personnel and strike additional alarms quickly enough to maintain safe and efficient staffing at the scene. Many times, companies may not be rotated back to work from rehab because of the exertion of conducting an attack in an occupancy of this nature.

It is crucial to properly identify building specifications that contribute to prolonged zero-visibility conditions before conducting operations during these fires. Once companies realize they may have very limited access and egress and will likely be operating in zero visibility—even after the fire is contained—they can use their orientation skills to maintain optimal safety while conducting interior firefighting. In addition, you must maintain a heightened awareness of air supply and company integrity throughout the incident.

David DeStefano is a 26-year veteran of the North Providence (RI) Fire Department, where he serves as captain of Ladder Co. 1. He was previously assigned as a Lieutenant in Ladder 1 and Engine 3 and a firefighter in Ladder 1. He has a master’s degree in public administration and a bachelor’s degree in fire science. He is an instructor/coordinator for the Rhode Island Fire Academy and teaches a variety of fire service topics throughout Southern New England. He can be reached at dmd2334@cox.net.

The Big Three
10 Tips for Truckies
Search That Saves Lives

A New Generation of ‘Veteran’ Firefighters