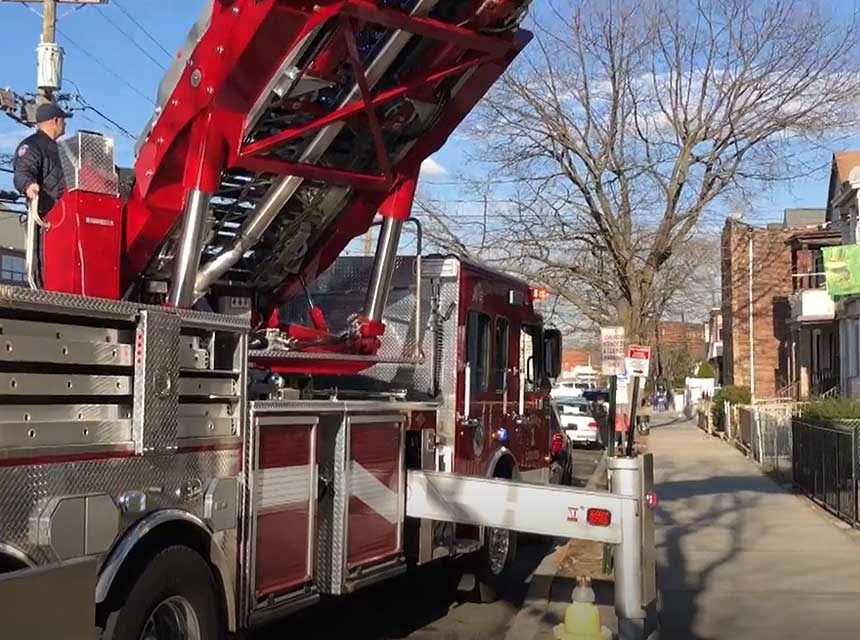 Every now and then, you’ll face adversity in apparatus positioning and have to think outside the box. Truck company apparatus operators normally position on the street and in front of the fire building, but what happens when they arrive later into the fire? Will they be able to get the rig into position and use it effectively? Or, will they just park the million-dollar mega-tool-carrying apparatus half a block away and be okay with just carrying a hundred-dollar hook and a thousand-dollar saw to the scene? Positioning an apparatus is an art that you master through training and fireground experiences.

When we drive a tower ladder, one of the main things we’re taught is to angle the cab away from the structure. This increases our reach, often referred to as increasing the “scrub area” of the rig’s boom or ladder. This works for both mid- and rear-mount apparatus because it moves some of the rig’s body out of the way. At other times, we might have to nose or back into the structure to get under wires, tree branches, or other apparatus’ ladders to reach the building. When we’re faced with narrow driveways or alleys between homes, doing this may allow us more reach and access points down the side of the structure.

Sometimes, when we operate on very tight streets, our angling in or out may be minimal and limit the rig’s positioning options. Often, when we’re setting the rig up in either of these positions, we may encounter the curb as an obstacle for the outrigger’s position. Placing just the jack pad on the curb without any cribbing makes the base of the outrigger sit on an angle, and it doesn’t properly support the apparatus. Also, you’ll most likely bend a metal ground pad or warp a polycarbonate one doing this. Throw a 4 × 4 or a 6 × 6 next to the curb or some other cribbing you carry, with the jack pad on top, to support the apparatus properly.

When operating to the side that has the outrigger on the curb, always check that the curb hasn’t sunk into the ground or the sidewalk hasn’t failed. Curbs and sidewalks have been pushed down into the earth and have caused apparatus mishaps in the past.

When pulling up to a corner building, the tower ladder officer and chauffeur should size up whether to place the apparatus on the corner to cover two sides of the structure. This provides more coverage for vent-enter-search operations and provides many more access points for water stream operations.

You may have to strategically position the rig at the corner to avoid such obstructions as streetlights, signs, traffic signals, and oblivious pedestrian traffic. If the fire is on an upper floor, the closer you get to the corner will enable the bucket to reach more areas. Today, most corner sidewalks are ramps, so we no longer have to worry about cribbing the curb.

Pulling into a multiple-alarm fire as an extra tower ladder, the officer and chauffeur sized up possible apparatus positions, as the incident commander hadn’t told them where to park. To cut the fire off from advancing toward us and the remaining unburned section of the building, we found a position we could back into. Although we were losing the reach of the bed section of the ladder, we had no other choice because we were splitting two large trees and jumping the curb in between two parked vehicles. Since the tree branches were going to be in our way, personnel took a chain saw up in the bucket and trimmed the branches to allow us access to the block-long burning structure.

Place the bucket even with or above the limbs being cut so when they fall they don’t endanger the members operating in the bucket or cause damage to the apparatus. Make sure that nobody is operating below the saw during the branch-cutting operation.

When members are flowing water, it’s very important that they glance back to see how much room they have in between the trees. They need to make sure that none of the larger branches are stuck in the ladder or snagged on any of the rig’s electrical or hydraulic cables; this could cause a mechanical malfunction or the cables to snap and put the unit out of service.

It’s also important to note that when the rear end of the apparatus has jumped the curb and is on the sidewalk, it is higher than the front end of the rig. You may need additional cribbing under front outriggers or jacks to build up and level the apparatus. During the operation, monitor the sidewalk for any signs of deterioration or failure.

In older sections of many cities, sidewalks may have old circular glass pieces or blocks in the concrete, often referred to as deadlights or vault lights. They allow natural lighting into the building’s basement and may be prevalent in older-style buildings. Do not set the apparatus or outriggers on these lights; they sit in a frame, and the weight of the rig will cause them to shatter or cause the sidewalk to collapse.

Also note that open metal grates on a sidewalk may be an air shaft from a subway, a utility vault, or basement access to a building. Driving an apparatus onto the sidewalk and over them could cause the sidewalk to collapse and put the unit out of service. Do not put the outriggers down on these metal grating sections because they could fail. If you must perform a life-saving rescue, properly place cribbing or planking over the grating and ground to ensure stability. Use some sense when you’re operating on a sidewalk.