The Middle Collegiate Church is the oldest of New York City’s four Collegiate Church congregations, established in 1628. The current church structure was built in 1892 and is home to the New York City Liberty Bell (cast in 1729, making it 25 years older than the famous Philadelphia Bell). New York’s bell tolled on July 4, 1776, marking the birth of the United States of America. It rings at historical moments, including the inaugurations and deaths of American presidents and in solemn remembrance of the September 11, 2001, terrorist attacks.

At 0448 hours on December 5, 2020, the church suffered from a spectacular and devastating six-alarm fire. More than 200 Fire Department of New York (FDNY) firefighters from more than 44 units battled the fire in the cold, pouring rain for more than seven hours.

The original call was for a fire at 48 East 7th Street between First and Second Avenues. This five-story, Type 3 ordinary construction building was the scene of a previous three-alarm fire on February 10, 2020 (see “Third-Alarm Ductwork Fire: Communication and Coordination Ensure Success,” Fire Engineering, June 2020). The building was unoccupied and undergoing asbestos abatement and renovations at the time of this fire.

In just three minutes, E33 arrived and reported a working fire, followed immediately by L9 and B6, the incident commander (IC). The balance of the enhanced first alarm all arrived within the next two minutes.

The IC ordered E33 and E5 to stretch a 2½-inch attack line to knock down the heavy fire on the first floor and to simultaneously stretch a 3½-inch supply line to L9’s tower ladder for exterior master stream operations. The IC completed his initial size-up and at 0453 hours sent an “Urgent” message to “… transmit a second alarm; we have heavy fire on the first floor, with extension up the interior stairwell and through the roof bulkhead, of an unoccupied building damaged by a previous fire. We have heavy smoke showing—under pressure—from the boarded-up windows on the third and fourth floors” (photos 1-2). 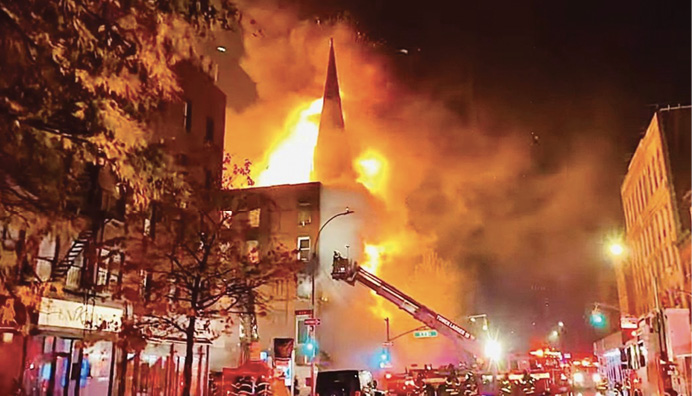 Knowing the building was unoccupied and had been severely damaged from the previous fire (at which B6 had also been the IC), the IC ordered all members to remain outside as L9 and L18 set up their tower ladders for master stream operations and L3’s chauffeur set up to use the tip of the aerial to vent the upper floor’s boarded-up windows.

While E33 battled the heavy fire in the first-floor restaurant and L3’s inside team forced open the remaining first-floor occupancies, fire burst through the boarded-up windows on the third floor and heavy fire was visible two to three stories above the roofline. The IC ordered the just-arriving L11 to place an aerial to the roof, fearing that the roof firefighters of L9 and L3 might be cut off from their escape route back to L9’s bucket. Calling the roof firefighters by portable radio, the IC ascertained that they had already retreated to the safety of L9’s bucket and were moving away from the building to await water for their master stream attack. L20 arrived on scene as the Firefighter Assist and Search Team (FAST) until relieved by the second of five FAST units eventually assigned.

E55 and E14 (in response order) stretched a second 2½-inch hoseline to the fire building as L11’s officer notified the IC that fire was extending to the eaves and roof of the church that fronted on Second Avenue (exposure 3). E55 and E14 relocated their hoselines to that location and the IC assigned B2 as the “Church Sector.”

L11’s forcible entry team gained access to the church and made entry with E55, E14, L3, and R1. On entry, they met with an extremely advanced fire engulfing the entire peaked ceiling area of the nave that was quickly progressing toward them. Large sections of the Gothic structure’s heavy timber roof started collapsing around them.

The officers of L11 and E14 simultaneously gave Urgent notifications to Command of the rapidly advancing fire. Based on that information, the IC ordered a third alarm at 0507 hours. At that same time, Division 1 arrived and took control of the Command channel and began sectoring off the scene. B4 was assigned the “Fire Sector” to monitor the operations on East 7th Street and the detached exposure 2 (48½ East 7th Street) and asked to keep all members out of the established collapse zone. B7 was assigned the “108 and 110 Second Avenue Sector,” and B9 was designated the Staging Area manager (Figure 1).

E15, arriving as the first engine on the second alarm, responded from the opposite direction on one-way East 7th Street. E15’s members attempted to stretch a third 2½-inch hoseline from E33’s apparatus to the main entrance of the original fire building (48 East 7th Street). However, E33’s chauffeur told them he would be unable to supply that handline because he was currently supplying the first 2½-inch attack line and had been ordered to supply a 3½-inch supply line to L9’s bucket. E15’s members then simultaneously hand backstretched a 3½-inch supply line a half-block to the next available hydrant and a 2½-inch attack line to the main entrance of exposure 1 to knock down a large amount of fire.

As they advanced toward the rear unopened staircase, B6 ordered them out of the building just before the staircase collapsed into the lobby. The E15 members backed out as ordered and continued to operate their hoseline as the collapse zone was established and L9 and L18 master tower ladder streams began operating. At that point, E15 personnel set up a ground monitor and operated outside of the collapse zone into the lower floors of the original fire building until relieved.

Inside the church, R1 members had begun to evacuate the second-floor church balcony since all members were ordered out. While they were withdrawing and when they reached the church’s vestibule, the entire structure erupted into flames. Tremendous amounts of fire shot through all of the historic Tiffany stained-glass windows, the large front rose window, and the roof. Large amounts of embers drifted into the early morning sky as the church roof sections collapsed. Those embers and flying brands, coupled with the extreme radiant heat, threatened the three downwind Type 3 ordinary construction buildings 110 and 108 Second Avenue and 301 East 6th Street—exposures 3A, 3B, and 3C, respectively (Figure 1). 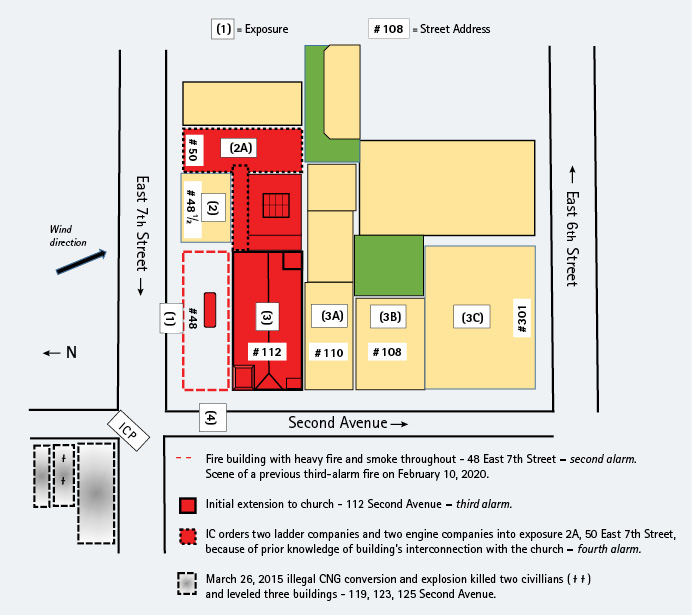 At about this same time, the roof firefighter of L9 activated his portable radio’s emergency alert button (EAB). After the IC acknowledged him, the roof firefighter gave a Mayday message that the roof of the original fire building (48 East 7th Street) had collapsed, followed shortly by a report that its rear wall had also collapsed into the church. Luckily, this was the only Mayday given during this large-scale event.

The Stage Is Set

With the collapse zone established and taped off by the B6 aide with yellow fire line tape and by the Safety battalion chief with red fire line tape, L9 and L18 operated on the two corners of the original fire building along with E15’s ground monitor, E33’s handline on the exposure 2 roof, and the original E5 hoseline in the street.

L7 arrived and was ordered to set up their tower ladder directly in front of the church, supplied by E28 for master stream operations there. At the same time, E9 arrived with Satellite 1 and set up their ground monitor on Second Avenue and alternated it between the church and the original fire building. This operation alone is what saved the New York Liberty Bell as E9 members directed that stream into the church steeple and bell tower vents throughout the initial attack (photos 3-4). 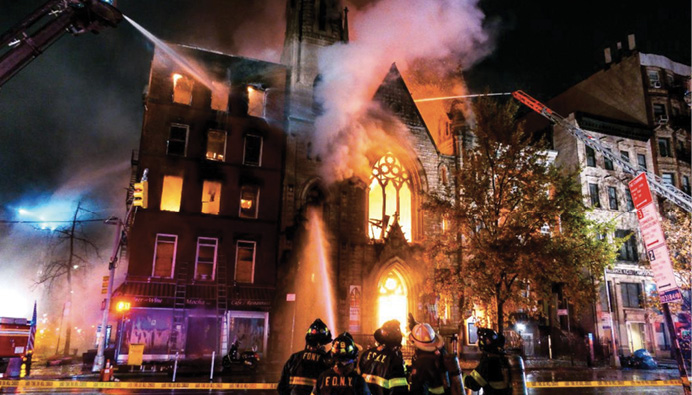 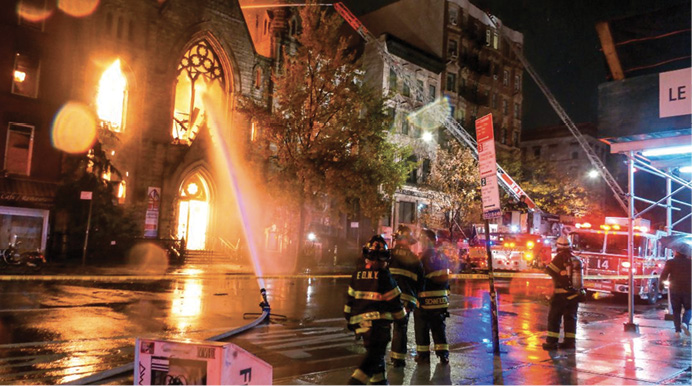 Since operations had transitioned to exterior, an all-out incident action plan was established to save the surrounding exposures. Division 1 transmitted a fourth alarm at 0509 hours. B7, responsible for the 108 and 110 Second Avenue structures, was given E3 and E14 (redirected from the now fully involved church), E24, and E55; L3, L5, and L12; S18; and R1. Each of these companies forced entry, searched, and evacuated; or facilitated, stretched, or operated one of three additional hoselines inside or onto the roofs of the three downwind exposures (3A, 3B, and 3C); or operated from the numerous exposed structures, setbacks, and extensions in danger of fire spread from the church. E55, reassigned from the church’s interior, set up a 3½-inch supply line to L5, which expertly deployed their ladder pipe’s master stream into the church from between exposure 3 and 3A (photo 5). 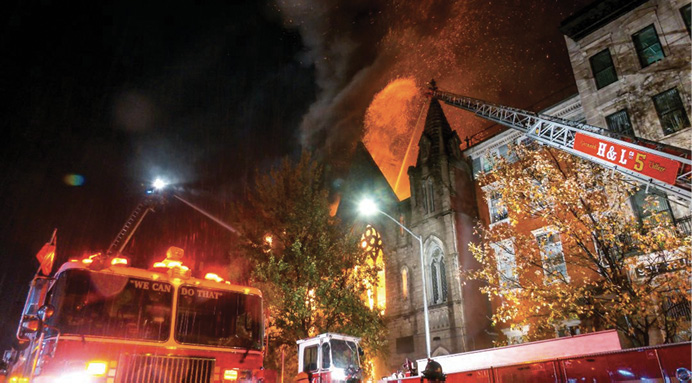 On March 25, 2015, a natural gas explosion occurred diagonally across the street from this fire. That explosion, fire, and subsequent multiple building collapses (the result of an illegal gas conversion) leveled three five-story multiple dwellings, killed two people, and injured almost a dozen others. Through B6’s experience working that explosion with the FDNY’s Incident Management Team (IMT), he knew that this current fire’s exposure 2A (50 East 7th Street, used as the IMT’s Command Post during the gas explosion’s four-day operation) was the church’s six-story Type 3 ordinary construction rectory. It connected with the church on at least two floors and it physically surrounded exposure 2 (48½ East 7th Street) (Figure 1). With that invaluable knowledge, the IC ordered B31 and B8 to become the “Rectory Sector” and assigned them E1, E5 (reassigned from the fire building exterior), E6, E10, E16, and E65; L12 and L20 (reassigned after being relieved and rehabilitated as the original FAST) and L18; S18; and R1 (all reassigned from previous duties).

For several hours [and working through at least two self-contained breathing apparatus (SCBA) cylinders each], these units searched and operated on two separate floors of the rectory that were directly exposed to the church conflagration. Pulling 12-foot-high plaster-and-lath ceilings and operating three handlines, these firefighters and the units who relieved them on the fifth alarm (called at 0640 hours), saved the church rectory from certain destruction (photos 6-7). 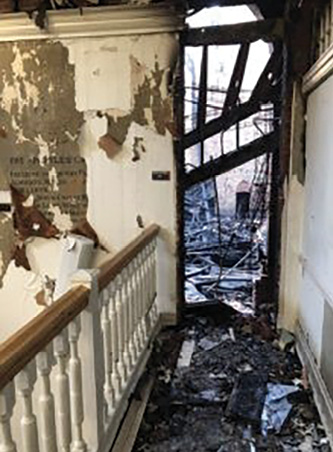 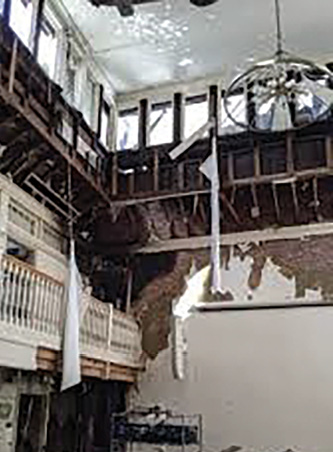 The sixth alarm was transmitted at 0906 hours for relief purposes. Although the fire was officially declared under control at 1230 hours, a watch line was established with two engines, two 95-foot tower ladders, one FAST, and two battalion chiefs for the first 24 hours. Thereafter, one engine, one tower ladder, and one battalion chief staffed the watch line for the next eight days as the fire buildings were demolished and the scene investigated. The church’s 128-year-old sandstone facade was saved, along with New York’s Liberty Bell (photo 8). 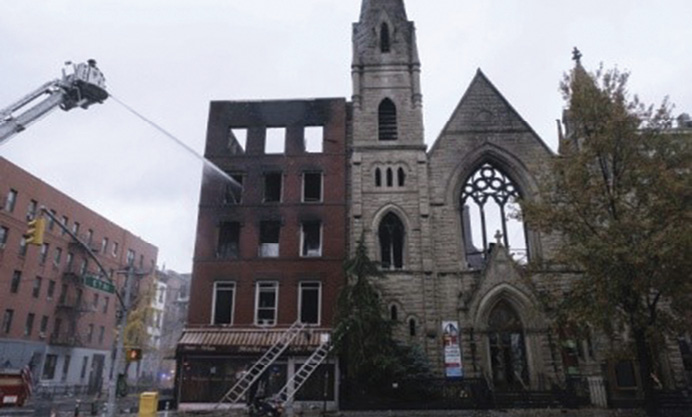 The FDNY members who responded to this conflagration confined it to the original fire building and the exposed historic church, the loss of which was heartbreaking. However, they saved the church’s façade, the belfry housing the New York Liberty Bell, the connected rectory, and exposures, proving once again that the members of FDNY are at the top of their game.

Author’s Note: For videos of this fire response, see the links below.

Stephen Marsar, MA, EFO, CIC, is a 30-year veteran of the Fire Department of New York and a battalion chief in Battalion 6. He served as chief and commissioner of the Bellmore (NY) Volunteer Fire Department. Marsar is an advisory board member of Fire Engineering.