On Easter Sunday, April 1, 2018, at approximately 0237 hours, our small-town fire department and three of our neighboring departments were dispatched for a structure fire at a three-story condominium building. The first alarm consisted of four engines, a tanker, a rescue, and a truck. The initial dispatch information was for a fire on the rear balcony of Unit 18-C, a third-floor unit. The residences were self-evacuating.

On the arrival of the chief at 0240 hours, he radioed that he had fire to the rear of the structure with an estimate of about 50 percent involvement of the rear and immediately requested a second alarm, which consisted of four additional engines and an additional truck company. Because of the Charlie side of the building’s proximity to the Susquehanna River, at 0242 hours, two fireboats were requested for firefighting operations. 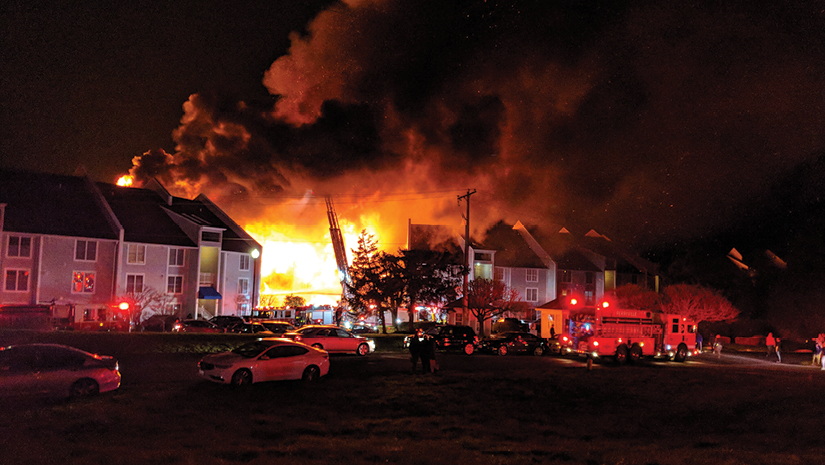 The building, of Type V lightweight wood-frame construction with cedar shake shingles, was also covered by vinyl siding. The building is about 180 feet wide by 60 feet deep and was built around 1998. It consists of 18 individual condo units and had three exterior stairways leading to the second and third floors; there were sprinklers only in the living areas, not on the balconies, and smoke alarms. Each third-floor unit has a loft that had a dormer with windows for a view of the Susquehanna River from the loft; the dormers had heating, ventilation, and air-conditioning (HVAC) units.

The building also had five firewalls that extended about two feet above the roof, dividing the building into six areas. This building had partially collapsed at about 0243 hours, approximately seven minutes after the chief arrived, and multiple walls collapsed about 31 minutes after arrival of the first unit. At 0251 hours, a third alarm was requested; it consisted of four additional engines. At 0302 hours, three additional ambulances and the county medic supervisor was requested to assist the ambulance and county medic unit on the first alarm with firefighter rehabilitation and care of the displaced occupants. 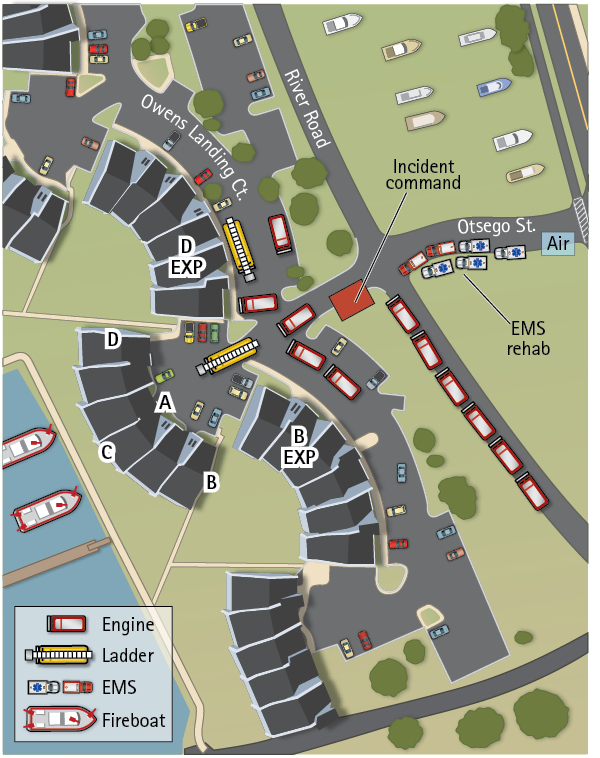 The priority of the first two engine companies was to ensure that all occupants were out of the building. As the first collapse was occurring, an engine crew emerged from the building and was about 15 feet from the building carrying an elderly woman they had just rescued from Unit 18-C. After all units were checked, the tactics became protection of the two neighboring structures, buildings that were built identically to the fire building.

When the third engine arrived, it laid in from a second hydrant and stretched multiple handlines to protect exposures and the first-arriving truck from heat exposure. The personnel of the remaining first-alarm units were used for handline deployment. 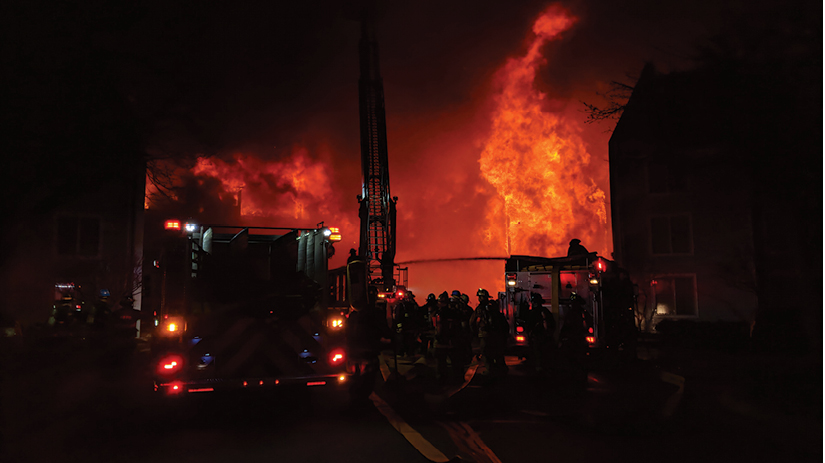 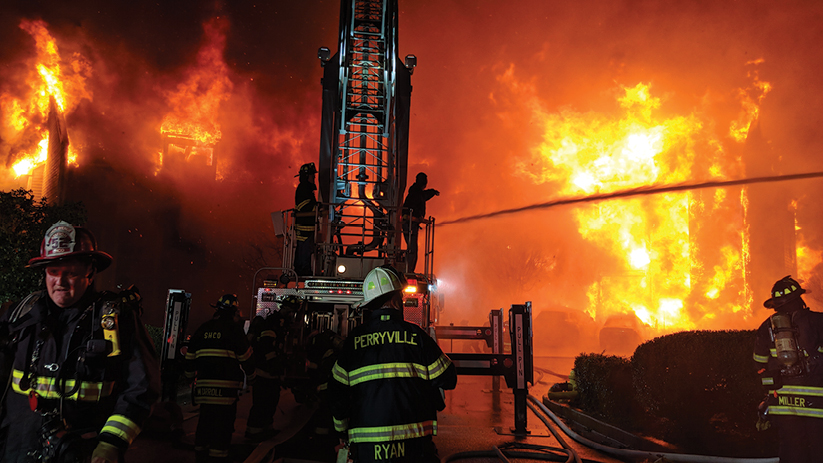 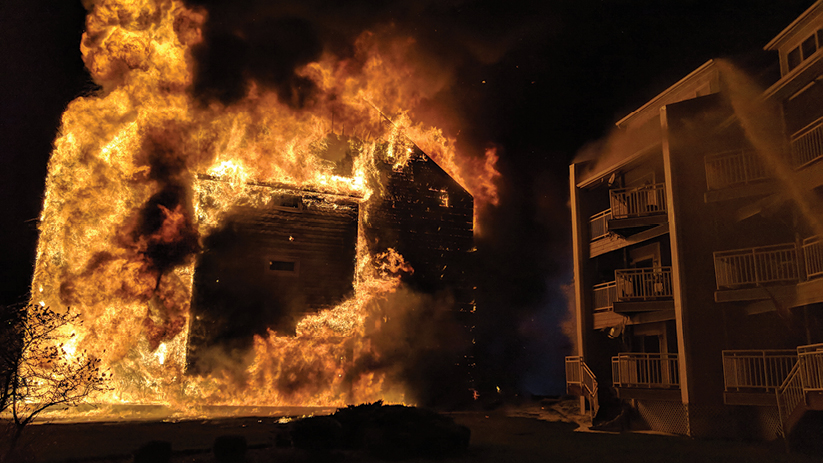 (2) The Alpha side is 100-percent involved. (3) Setting up tower operations on the Alpha side.

(4) Protecting exposures on the Bravo side.

The two fireboats were placed in service. Their monitor pipes were used to extinguish the fire building, and one 2½-inch handline extinguished spot fires on the side Delta exposure. It is estimated that the fireboats flowed more than one million gallons of water in about a six-hour time frame, drafting from the Susquehanna River.

The four ambulances and two county medic units on scene treated six patients and set up firefighter rehabilitation. Three patients were transported to a trauma center for possible smoke inhalation and lower arm burns; one was transported by Medevac and two by land. The other patients were sent to a local hospital for anxiety and other minor medical issues. All patients were released from the hospitals within three days. All other residents were placed on a school bus and taken to the fire station to meet with the American Red Cross, which provided refreshments.

The arriving second- and third-alarm units assisted with exposure protection, including handlines and ladder pipe operations. The truck on the second alarm, supplied by one of the third-alarm engines with its own hydrant, set up and flowed water over the peak of the roof of the Delta exposure while an additional engine crew stretched a handline into the Delta exposure to extinguish a small fire on the roof of the Delta exposure’s Charlie side. Three engine crews were used to stretch additional handlines through the first floor of the Bravo exposure to assist in placing 2½-inch handlines in service, extinguishing the fire building as well as for protection of the Bravo exposure’s Charlie side. One engine and a brush unit patrolled the downtown area to extinguish any flying embers.

The incident was placed under control and units began clearing the scene at 0848 hours; the final unit left at about 1610 hours, 14 hours later and after roughly 800,000 gallons of water were used by the land suppression units. In addition to the above resources, the American Red Cross assisted in finding housing for the displaced families, and the local police department and a local towing company removed four cars with fire-related damage. A private contractor responded with an excavator to assist in turning the collapse debris to help extinguish the fire under it. Small spot fires were extinguished several times over a four-day period for final extinguishment. The State Fire Marshal’s Office investigated the fire. No firefighters were transported from the incident scene; however, it was discovered the next day that a mutual-aid fire department officer broke his hand, possibly during the forcing of doors during the evacuation process. 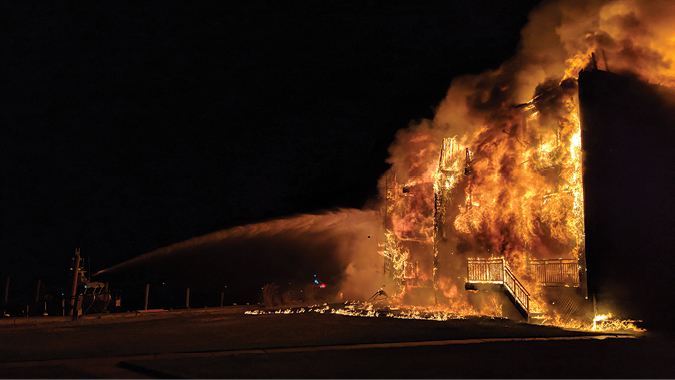 (5) The fireboat operating on the Charlie side.

Why did the fire grow and the collapse occur so quickly? It is believed the fire started on the third-floor balcony at the rear of the structure, north end of the building. Either by burn-through of the deck or drop down of the vinyl siding covering the deck, the fire dropped down to the ground. As the fire was building on the third-floor balcony along the wooden boards and vinyl siding, engulfing more of the deck, the heat generated by this fire traveled up and into the soffit area, igniting the vinyl siding and traveling into the roof area, and began to expose the wood roof trusses. The fire that dropped down to the ground was also unchecked and began to burn the siding at ground level.

As this fire continued to burn, it created more heat, catching the vinyl siding above it. Once the fire reached the soffit, it began to travel along the soffit, igniting more soffit and creating more hot gases that went into the roof area. Eventually, the trusses failed and the weight from one truss was transferred to the next until too much weight was placed on the remaining trusses and they failed from fire exposure, heat exposure, or excessive weight.

The wood shingles covering the vinyl siding contributed to the higher burn temperatures and assisted in the fire’s rapid spread. The fire burned the shingles at the lower end of the roof and heated the upper shingles, eventually burning to the peak and across the peak, jumping the fire walls with help from the wind.

When you add in the facts that the building was about 75 feet from the water and there was an initial three- to five-mile-per-hour (mph) wind off the water, weather conditions increased the rate of fire spread. Firefighters on the scene estimated that the winds may have grown to as high as 30 mph during the height of the fire. When you have a fire driven by the wind and a wood-frame structure, you have fast fire growth. As the fire spread along the eaves of the structure, the continual drop down to ground level that resulted from the fire’s growing from the ground level up the side of the building at several locations followed the same pattern for travel as discussed.

A concern for firefighter safety was that at each end of the fire building was another identically built structure separated by about 12 feet corner to corner. The heat melted the vinyl siding on the exposed structures, and a major concern became stopping the fire spread to the exposures. This was accomplished through continual streams of water applied to the exposed structures to cool them and keep the vinyl siding and exposed shingles below their ignition temperatures.

As the roof began to collapse, the walls had no support, and as they heated up, their strength was reduced until they could no longer hold up the floors attached to them. The floors weakened as their support beams became exposed to fire and the added weight of the floor and roof that fell on them. The stress from the roof dropping onto the floor may have caused the weight on the floor supports to exceed their capability, adding to quicker failure of the floor supports.

Delay in Reporting the Fire

Another factor that led to this rapid fire spread and contributed to the size of the fire was the unknown burn time on the nonsprinklered balcony prior to discovery of the fire and how long the occupant who discovered the fire attempted to fight it before calling 911. A security camera across the river from the fire building indicated that it was about 17 minutes before the fire department was called. In this time, the roof trusses could have been exposed to heated gases. As the late Francis L. Brannigan has noted about lightweight wood trusses, nobody can predict when failure will occur. The building construction itself led to the spread of the fire. A Type V wood frame lends itself to void spaces, whether by construction or by failure of contractors to seal up holes in walls or utility chases. By its very nature, wood burns; how fast it burns is based on its mass and exposed surface area. Then, add in the fire load created by the furnishings and various decorations used in each of the condo units. Initially, wind may have played a small role, but it played a bigger role in supporting fire growth with increased oxygen levels.

What are the lessons learned from this incident? Briefly, there is a need for education, preplanning, and getting the right resources on the scene in a timely fashion.

(6) View on the fireboat’s arrival. (Photo by Joseph Weaver.)

RAY RYAN III is a retired captain from the Baltimore City (MD) Fire Department, where he served for 22 years. He is the chief of the Perryville (MD) Volunteer Fire Department, where he has been a member for 40 years. He is an instructor with the University of Maryland Fire and Rescue Institute and an ICS instructor with the Maryland Emergency Management Agency. He is serving a fourth term as a town commissioner for Perryville.