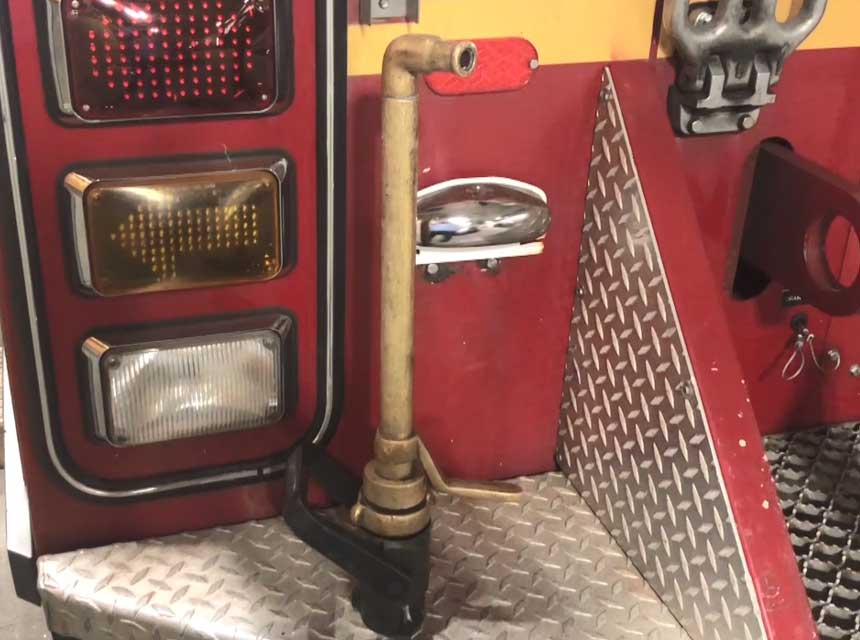 Firefighters are always going to rely on one major item—and that is water—to extinguish most of our fires. Whether it’s through a quick “can” job (pressurized water extinguisher) or a hoseline, water is our normal extinguishing agent. We often hear that “water always wins,” but don’t forget that sometimes we’ll have to rely on adding foam to our water or use dry chemical or Purple K extinguishing agents at some incidents. Most departments know how to get water from a hydrant, drafting tank, or pond, but do they know alternate ways of applying it for a faster and more efficient extinguishment?

You may be operating short-staffed and encounter an advanced fire in an attic of a private dwelling. There may not be enough firefighters on scene to pull the ceilings quickly as the fire grows in intensity. Engine company personnel should be focused on getting their line in place rapidly and operating as quickly as possible, even without sufficient resources.

First, this may require the officer to carry some type of hand tool to tackle a variety of tasks. One of the tasks should be the ability to punch a hole in the ceiling. If you think you can’t reach it, stand on a chair, table, dresser, or counter.

Hopefully, you’ve found a spot in the attic where there’s no flooring and you can apply water. If not, move toward the wall in the room where the roof line is the lowest. This area in the attic is less likely to be floored and can give you access into the attic behind knee walls, if present. Now, the nozzle firefighter can direct the stream into this hole for initial water application.

Once that’s done, slide the hoseline a few feet up through the hole and let it flow. You can shake or bounce the line to give the stream more deflection to cover more area. Performing this tactic in more than one area of an attic can aid in faster knockdown. It’s just like using a cellar nozzle or distributor through the first floor to extinguish the fire below.

Recently, we had a severe fire in the cockloft of a large multiple dwelling, in an apartment with hoarding conditions (the landlord knew the ceilings were compromised and the tenant wouldn’t let them fix them). Unbeknownst to us, the tenant was hoarding clothes in this space, creating a larger fire load, which we found while pulling the ceilings.

In the rooms of the adjoining apartment where we were operating, there weren’t any dressers, chairs, or tables to stand on to apply water into the cockloft. There were three lines operating with the truck company opening up the ceilings, but the fire was still raging above us in this “lumberyard.”

The command chief was already thinking ahead of us: He had the cockloft nozzle (nozzle appliance with two tips that operate in opposite directions on an extension pole) put in place. On the initial opening of the nozzle, fire, smoke, and gases did get pushed down through some open areas of ceiling into the apartments. Luckily, members were aware of its intended use and pulled back to a safe position behind the operating hoselines on the top floor. The nozzle did knock down a lot of the fire and was used in a few locations while members continued to open up to hit smaller pockets of fire.

Also, during this fire, two other uncommon stretches were being performed: (1) One line was hand-stretched up an aerial ladder to protect the trench cut and could be used to prevent the fire from “jumping the trench” and extending into more areas of the cockloft. (2) A rope stretch was used. We currently use an old gallon container (bleach, cleaner) with a handle; a rope is inserted into it from an opening at the top. Then the bottle is dropped from a location or floor below and the hoseline is pulled upward. Although we’ve always used ingenuity or a bent tip nozzle to extinguish a cockloft fire, we’re gaining more experience with the cockloft nozzle.

The bent tip was originally designed to combat fires in walls, voids, or shafts. It’s basically a right-angle tip on a short piece of pipe that attaches to a shutoff; or, it can be a tip screwed onto the shutoff. We’ve used it numerous times by punching it through the lath and plaster walls or ceilings to extinguish hidden fire. It allows engine companies to operate without a truck company next to them opening up. It’s a great idea for the engine to bring it on multiple alarms when faced with fire in hidden areas of the building.

Wind is great for spinning turbines and creating power, but one thing is for certain: It shouldn’t be mixed with fire. When wind hampers our advancement on a fire in a high-rise multiple dwelling, we need to have an alternate plan of action. The floor-below nozzle wasn’t so well received by many initially, but after it was used to extinguish some wind-driven fires, it rose in popularity.

It can be used in a variety of situations. If we’re losing a top floor and units are backing down to the floor below, we can revert to also getting this nozzle into position so members aren’t injured or having fire blow down on them from master streams off our aerial devices. This may hold especially true for areas in which we can’t get exterior elevated streams into position.

Firefighting is all about getting rapid water onto a fire, but remember: You might have to use some smart water also!