The radio goes off for a working fire in a nearby hotel on the fifth floor. Minutes later, you are using your standpipe bag to make the connection—i.e., “dress the pipe”—on the fourth-floor landing with a working fire above you in what appears to be a hotel with a faulty sprinkler system. This is most likely a stressful situation that you may or may not have been in before; doing the small things right will help to overcome stress, and smaller successes will turn into larger successes. One of these things that some might think of as a rather small is the tip, “Don’t forget to flush!”

Flushing the standpipe prior to fire department use is no small task but is a critical step that can serve multiple purposes and significantly impact the result of the firefighting operations. The flush confirms the integrity of the standpipe, its water supply, and the valve’s operation; flushes the debris from the pipe; and allows you time to get ahead of problems as they arise.

Flowing water from the standpipe confirms that the pipe has a water source. Standpipe systems have numerous water supply possibilities; we must know some general options. Pipes may be supplied by a pressurized fire pump, a municipal water source with or without adequate pressure, or the fire department connection (FDC) only. Hopefully, you have preplanned this building and know the system you hope to use. In many pressurized fire pump systems, when you open the valve to flush it, the system pressure drops and the fire pump senses the drop in pressure, kicks on, and supplies pressurized water to the system. This is ultimately what you hope will happen with a system supplied by a building fire pump.

Similarly, when the FDC and the engine are hooked up and pumping adequately, water comes out when you flush the valve and everything is good. But, if you open the valve and no water comes out, this could mean that a valve is not open in the pump room or at the base of the stairwell riser, the engine is attached to the wrong connection, or any number of other reasons. Perhaps the fire pump is disabled or the standpipe itself is broken, but no water coming out of the pipe could be a perfectly normal result for a manual dry standpipe or a manual wet system that depends on the FDC for water supply and is not connected yet.

Standpipe valves can be in a building for years unused or may be vandalized with criminal intent or by curious building occupants from days past. Many things can happen between the day it was first installed or last used and the day you need it to work. To ensure success, before ever opening the building valve, remove the cap and attach a fire department gate valve (photo 1). This valve is one that you brought with you, you know it works, and you have trained with it before the day in question. 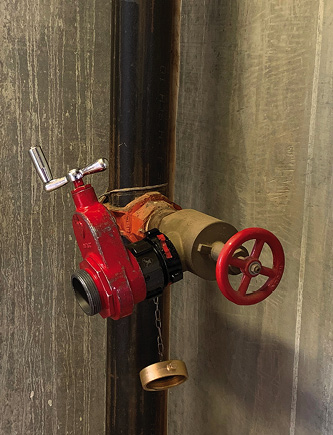 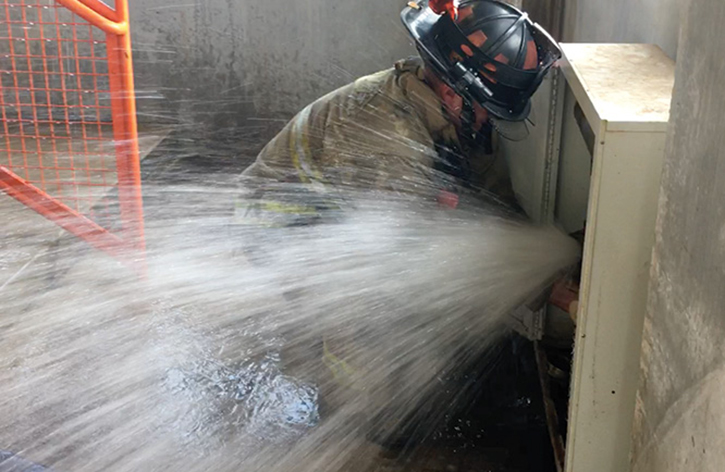 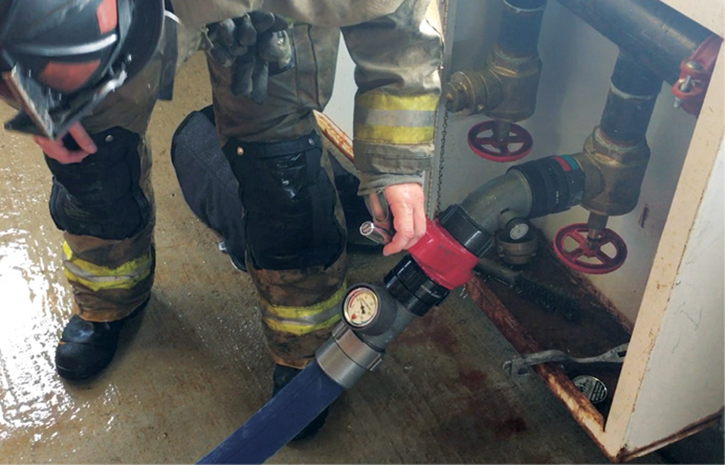 The necessity of flushing debris from the standpipe system is easy to understand. Hard water deposits, scale, toys, trash, and any number of things can find their way into a standpipe system. Flow enough water to flush these items out of the system and onto the landing. Foreign objects will be easier to flush through the 2½-inch valve than through the end of a 11⁄8-inch nozzle tip. Flushing a dry system will flush out not only debris but also the air that is built up in the system to prepare the system for firefighting. Taking a little time now to flush the potential nozzle-blocking objects out can pay off in untold ways during the firefighting operation.

Finally, crews don’t want to forget to flush because it allows them time to overcome problems. As soon as possible, the stairwell firefighter should flow copious amounts of water from the standpipe while other crews are stretching lines and getting things in place for the firefighting operation.

For example, if the building has a manual dry valve and the engine crew outside reports that they are connected to the building and supplying water but the standpipe firefighter opens the stairwell valve and nothing comes out, what’s the problem? Is the system broken, is the pump room valve closed, or is the engine connected to the wrong standpipe connection? The more quickly the incident commander is informed about a problem, the easier it is to fix it without significantly increasing the reflex time (the time from dispatch to water on the fire). Photos 4 and 5 show a standpipe firefighters found at an occupied building in Oklahoma City, Oklahoma, while preplanning the district and talking to a new member about standpipe connections. 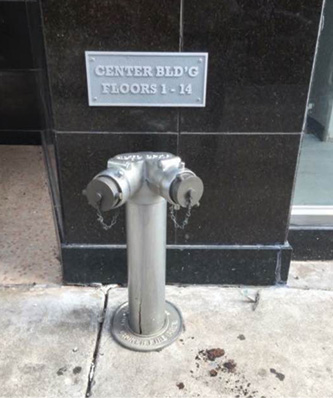 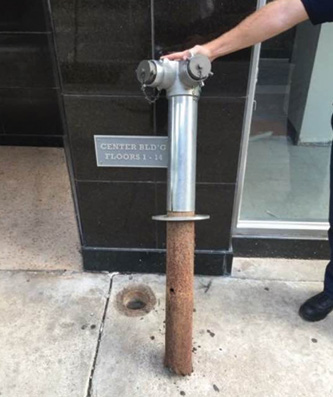 Another example that has given firefighters pause is connecting to a manual wet system on a lower floor with a number of floors above the fire. A wet system is filled with water but is not connected to a pressurized water supply. On a fifth-floor connection of a 10- to 15-story building, there are 120 to 150 feet of standpipe system filled with water above the connection point. This will create 60 to 70 pounds per square inch (psi) of head pressure on the valve from the water above the valve in the pipe. Remember that each foot of elevation in the standpipe exerts 0.434 psi of pressure.

In the example above, 120 feet × 0.434 = 52 psi, 150 feet × 0.434 = 65 psi. If you flow the valve for only a second, the system will appear to have adequate pressure and water volume. But, in reality, the pipe is only draining the water from the pipe above it because the standpipe was designed to enable the fire department to supply the water for actual firefighting. That’s why it is important to flush enough water to determine if the pipe is simply draining or is being supplied from a water source.

A similar situation in systems like these is that sometimes a small jockey pump supplies the water in the system. When you open the valve and only flow a small amount of water, the jockey pump will kick on and slowly try to fill the system back up. If the crew doesn’t flow an adequate amount, it confuses the operator into possibly thinking there is a water source. The more quickly crews learn the answer to questions such as these, the more quickly they handle and overcome them.

If you spend time preparing, standpipe operations can be systematic, not stressful. Practice these small things, randomly mix up training, and try problem solving possible standpipe complications. Remember, when we do the small things right, they add up to big successes that can make the difference in making standpipe firefighting go smoothly.

JOSH PEARCY began his fire service career in 2001 and is a lieutenant with the Oklahoma City (OK) Fire Department, assigned to the special rescue station. He is a nationally registered paramedic and a fire, EMS, dive, and technical rescue instructor. He is an instructor at FDIC International and is a search team manager/helicopter rescue specialist for OK-TF1 urban search and rescue team.