Size-up of a structure fire must be continuous and ongoing, calculating the risk vs. the intended benefits and judging the effectiveness of firefighting strategy and tactics. The fireground is dynamic; conditions can deteriorate rapidly, necessitating a shift from offensive, interior operations to defensive, exterior operations and establishing collapse zones.

Rapid repositioning of an elevated tower ladder flowing water requires firefighters to work as a team with the speed and intensity of a pit crew at an auto race. We can achieve speed and proficiency in repositioning aerial apparatus only by running frequent drills.

An Incident in Chicago

At this fire, Chicago (IL) Fire Department (CFD) firefighters repositioned a tower ladder twice to improve the effectiveness of its elevated master stream and move it out of collapse zones. The fire building was a two-story taxpayer with commercial occupancies on the first floor and residences on the second floor. Some of the commercial occupancies were occupied and in business, while others were vacant or undergoing renovation. The original ceilings in old buildings, such as this fire building, tend to be quite high; therefore, firefighters should strongly suspect the presence of one or more false ceilings when operating in renovated buildings.

Response to a Fire in a 100-Year-Old Taxpayer in Tampa, Florida

The fire appeared to have started in one of the first-floor commercial occupancies and is believed to have extended to adjoining occupancies through a common void space above the ceilings. Fire extended vertically to the cockloft, most likely following plumbing in walls or utility chases. Pushed by strong winds, the fire in the cockloft eventually took possession of the entire roof assembly. In photo 1, smoke is pushed by the wind from a cockloft vent. Interestingly, the fire seemed to “bypass” the second floor and head directly to the cockloft. 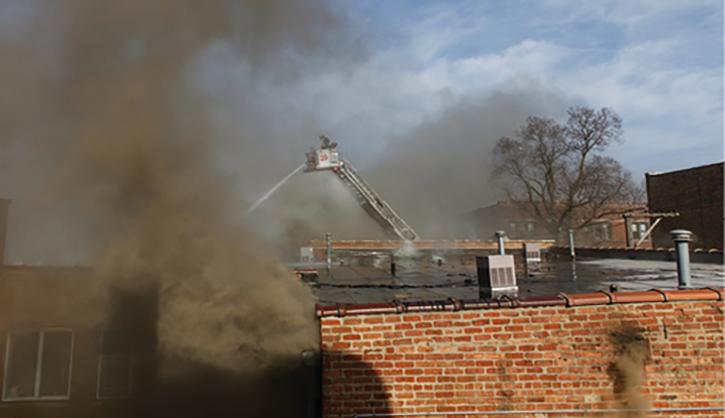 In photos 2 and 3, master streams from Tower Ladder 39’s basket and Engine 122’s deck gun are directed into the overhead to hydraulically breach the ceilings and deflect water off the underside of the roof. This tactic is generally more effective than attempting to direct streams from above into holes burned in the roof. Penetrating ceilings is achieved most effectively by flowing small-diameter smooth bore master stream nozzle tips at high pressures. 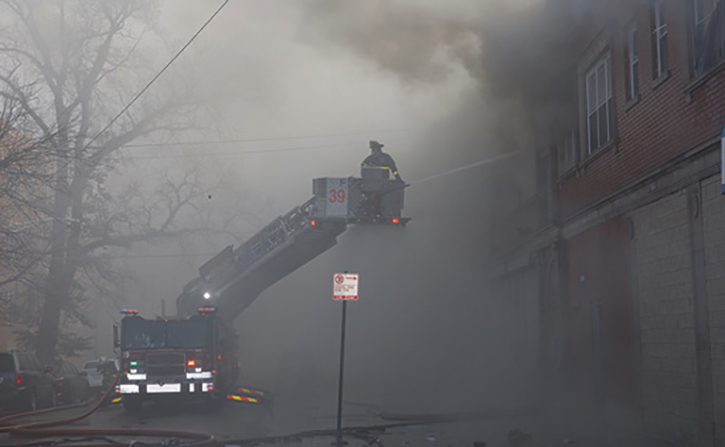 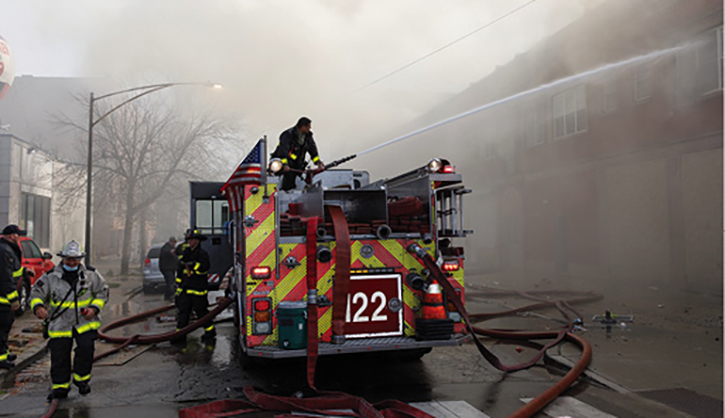 In photo 4, notice the overhead roll-down security gates protecting storefront doors and show windows on the B side. These gates consist of interlocking slats that roll up on tracks into a drum. Later in the incident, three of these assemblies would be blown off the building by a sudden, hostile fire event. In photos 5 and 6, notice the iron security gate for the courtyard at the rear/C side accessed by a narrow alley; it would later be mangled in the first of two collapses. 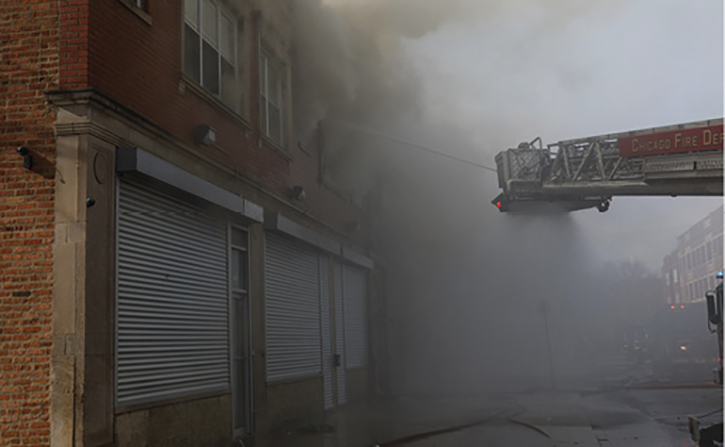 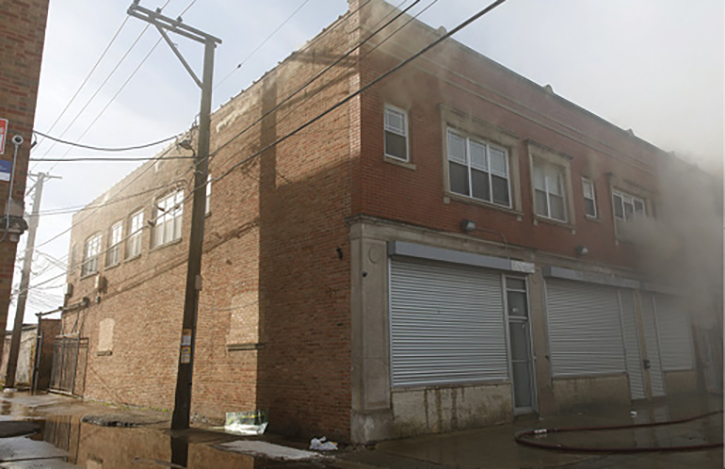 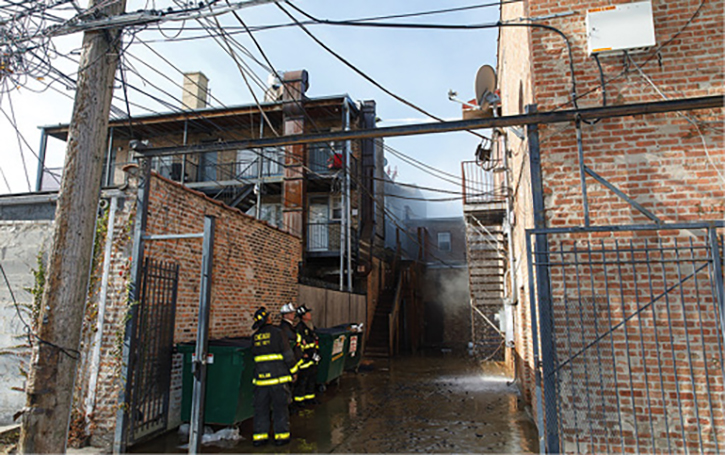 Wall Collapse and Blow Out of Security Gates

What exactly caused the first collapse is purely supposition from an author who wasn’t there. It is believed that the fire burning in the cockloft became “ventilation limited” and somehow found a source of oxygen, which precipitated a backdraft or smoke explosion. Following the gas laws of chemistry, when a fire intensifies, so do temperatures, which heat and expand gases. If the volume of gases contained in the fire building remains constant, then another gas law applies: A rise in temperature causes a rise in gas pressure—pressure, in this case, great enough to blow out the C-side wall and the security gates on the B side. Photo 7 shows turbulent smoke, indicating that pressure is building in the cockloft moments before the first collapse ignites, as seen in photo 8; notice the mangled iron security gate and bricks filling the alley on the C side of the building. In photo 9, note the effect of pressure exerted against the C wall; there appears to be no fire damage to the apartments. The presence of drywall on interior wall studs below the windows most likely replaced the original wood lath and plaster during renovations. 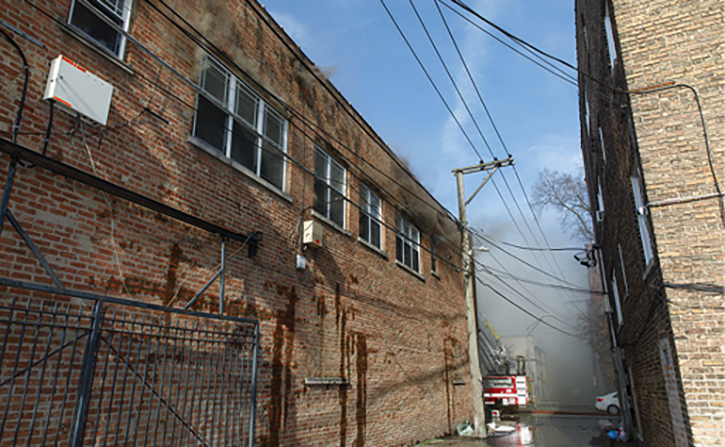 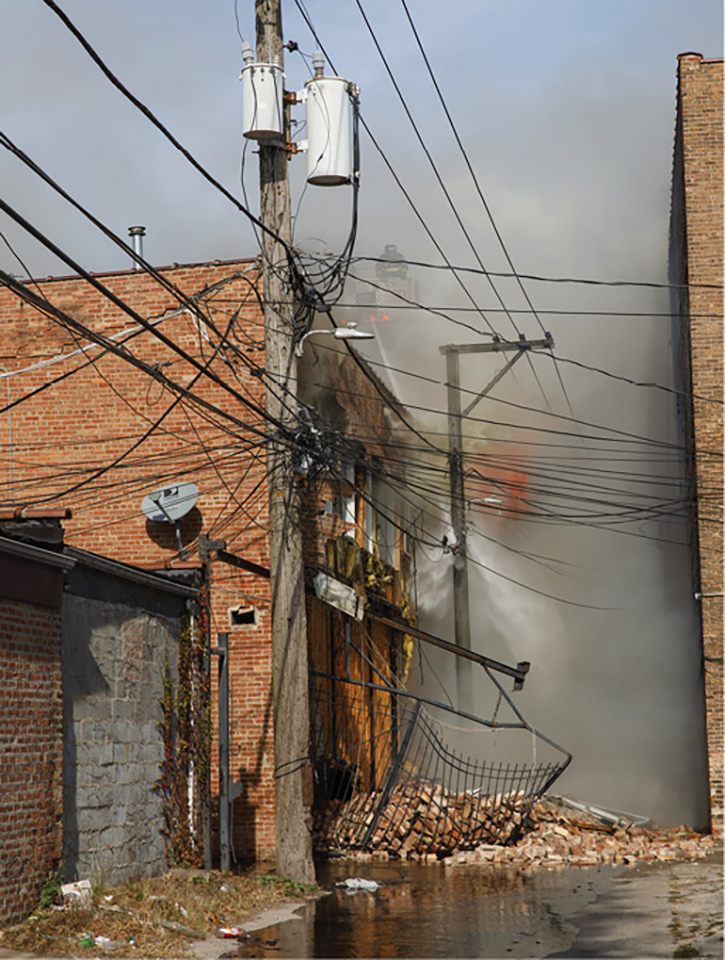 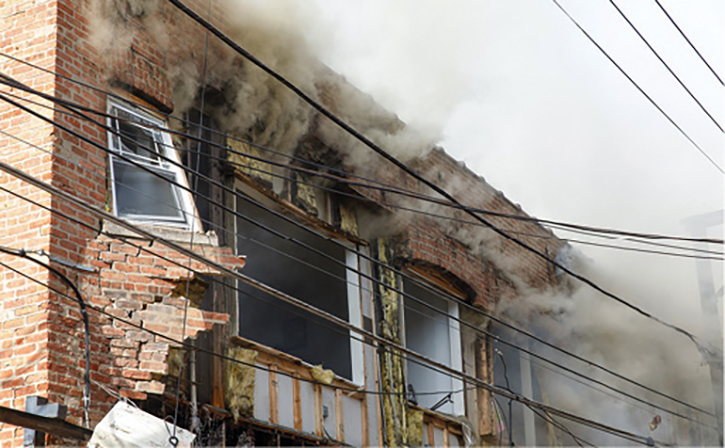 In photo 10, the roll-down security gates that were blown off the B-side wall of the fire building struck Tower Ladder 39.

In photo 11, note that the debris that was hurled from the building is now scattered all over the street. In photo 12, the tower ladder has been repositioned; notice the condition of the interior of the B-side commercial occupancies—there is no fire damage, supporting the theory that a precipitous rise in pressure caused the assemblies to fail. 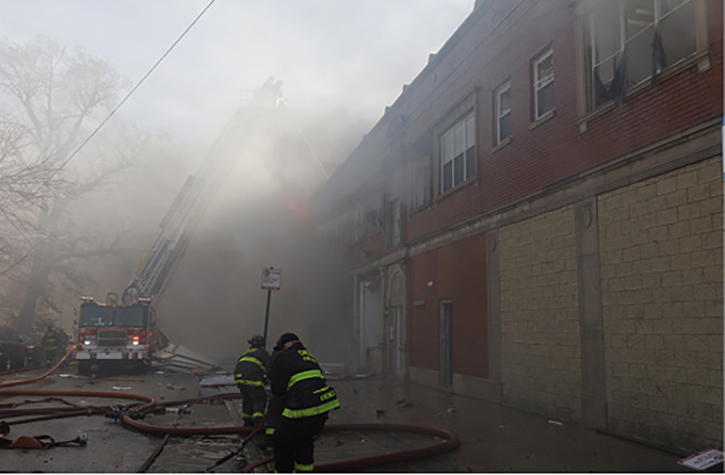 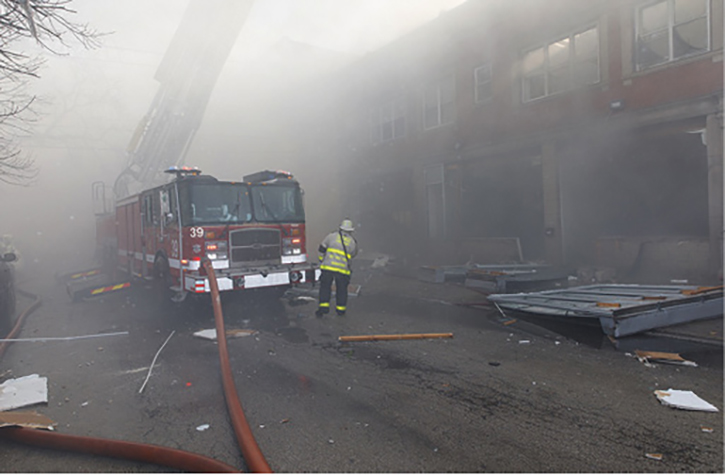 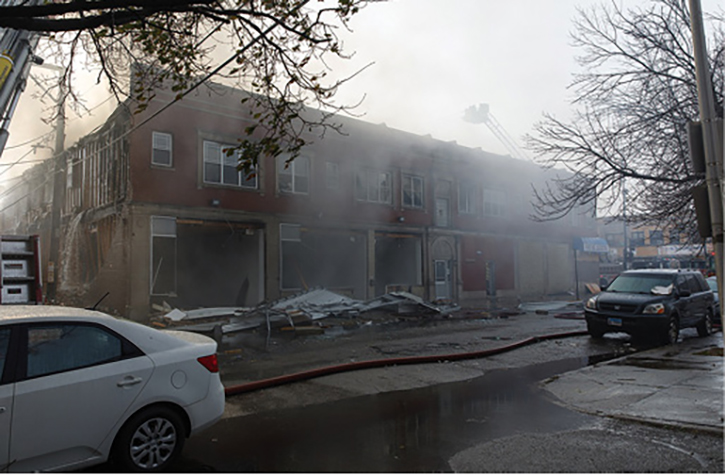 In photos 13 and 14, moments before the second collapse, the courtyard wall facing the D exposure was heavily damaged by the fire event. Notice the horizontal crack in the upper portion of the wall and parapet leaning inward. This movement could be caused by roof joists that have burned though and are pulling the walls inward. 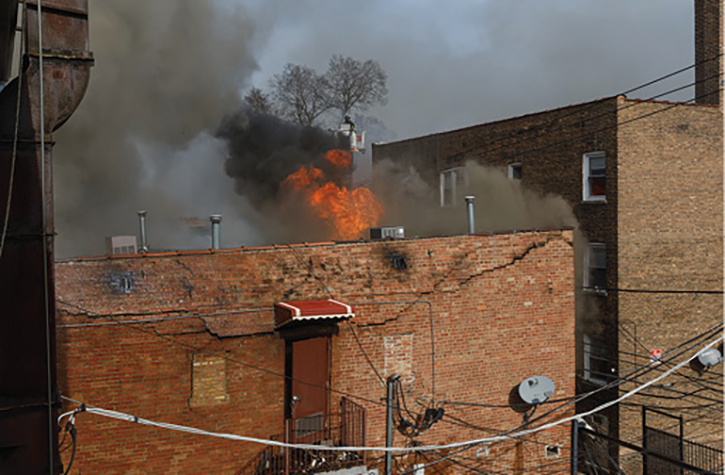 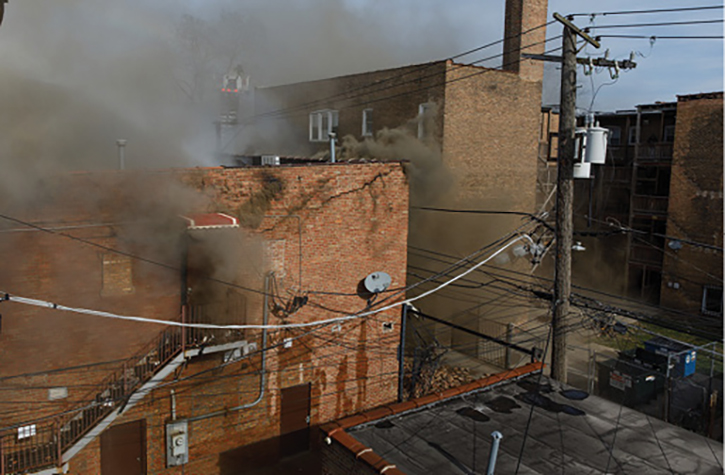 Photos 15-18 are time-lapse photos that show the collapse of the courtyard wall and exterior stairs. In photos 19 and 20, the wall collapse allows oxygen to enter the cockloft freely and intensify the fire. Note the drywall on the interior wall is largely undamaged because the fire was primarily confined to the cockloft. 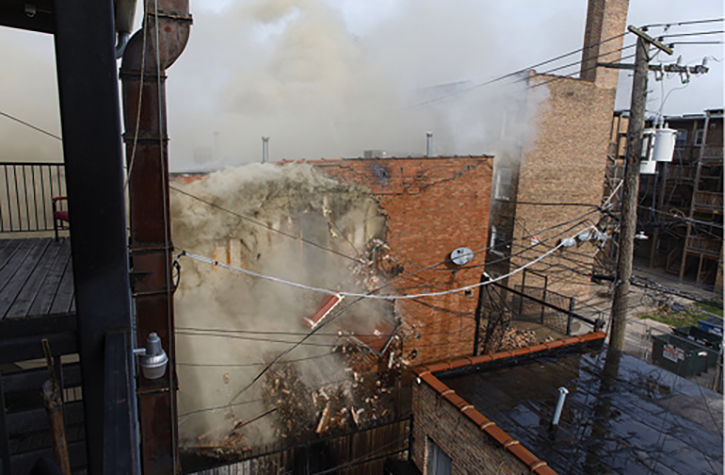 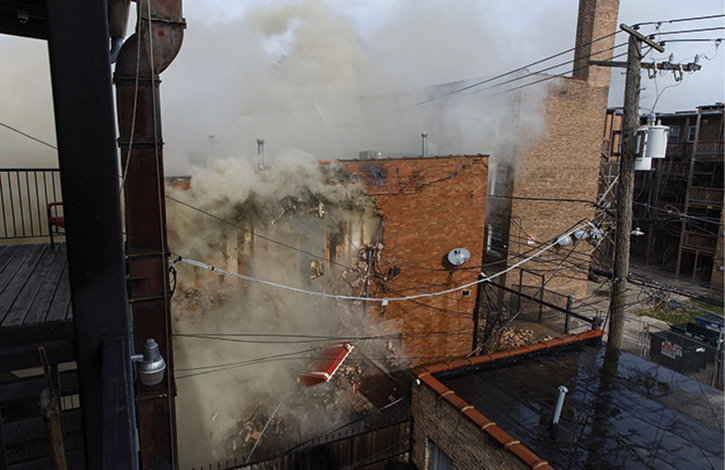 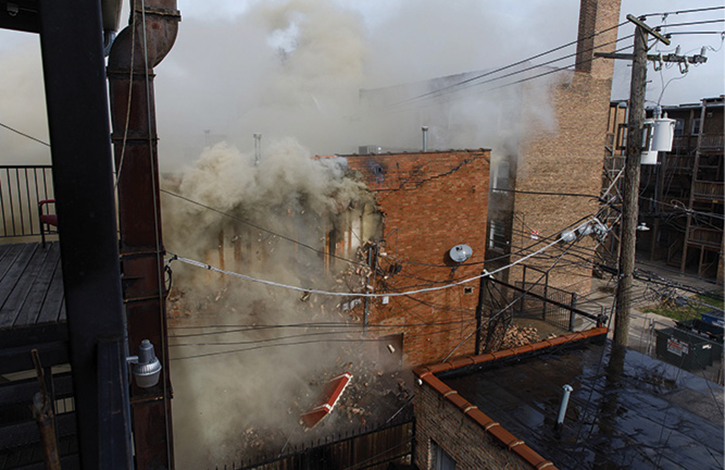 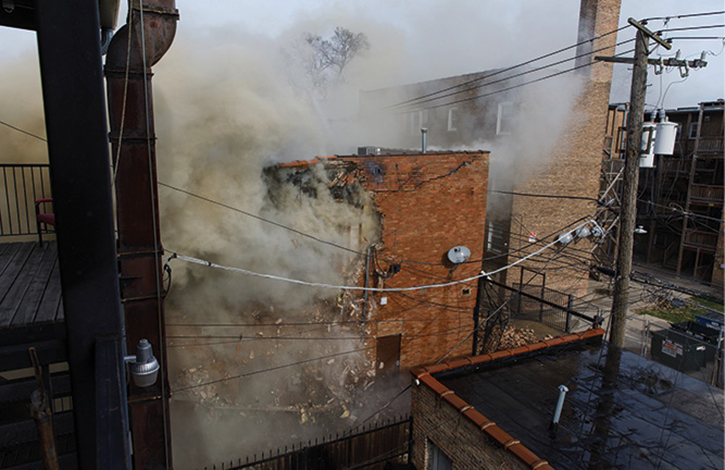 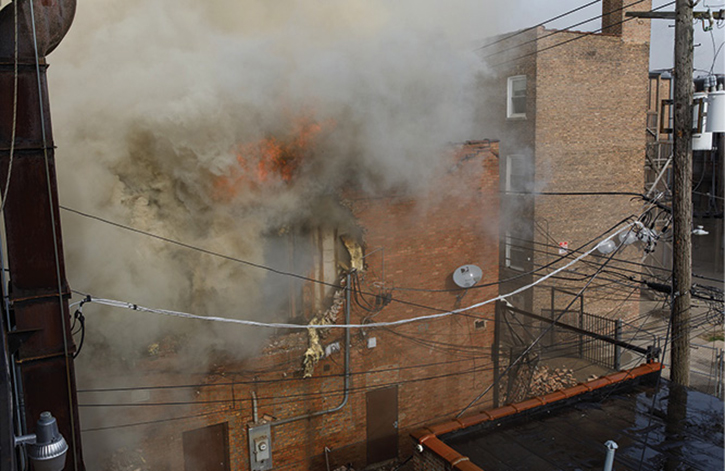 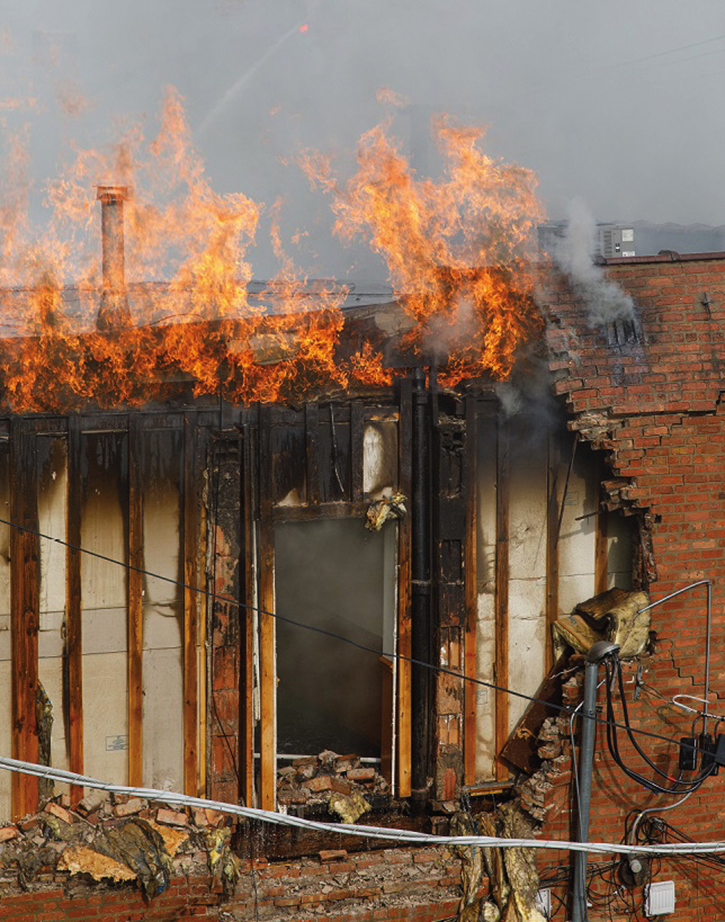 The wall collapse allowed firefighters to direct a stream into the cockloft from a point of vantage on the roof of the building’s D exposure.

Photos 20 and 21 show the “point of vantage” tactic that was mastered by the CFD long before ladder pipes and water towers were developed to deliver elevated streams. 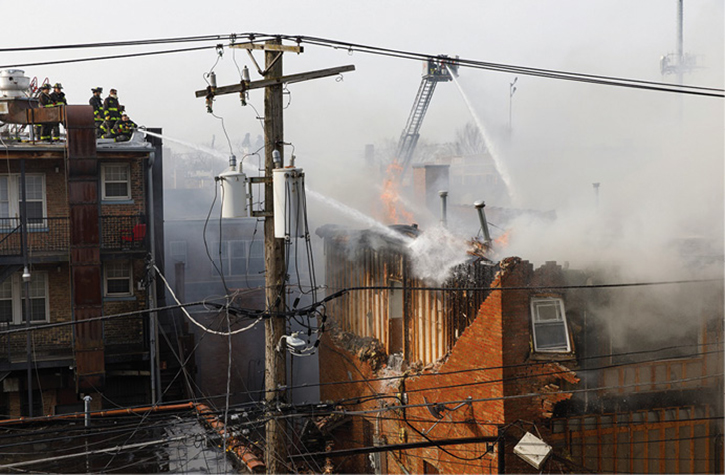 CFD firefighters are well aware that operations in alleys can be dangerous because the alleys are so narrow. Firefighters operating in an alley are vulnerable because there is not sufficient space to establish a collapse zone, which should be a good distance from the building—at least 1½ times the height of walls. When establishing collapse zones, consider utility poles, transformers, and electrical service wires that falling walls will bring down.

To avoid operating in alleys, stretch hoselines from engines connected to hydrants on the street at the rear of a fire building. To facilitate the operation, assign truck companies to assist in stretching hoselines and cut fences and locks on gates commonly encountered at the rear of buildings. 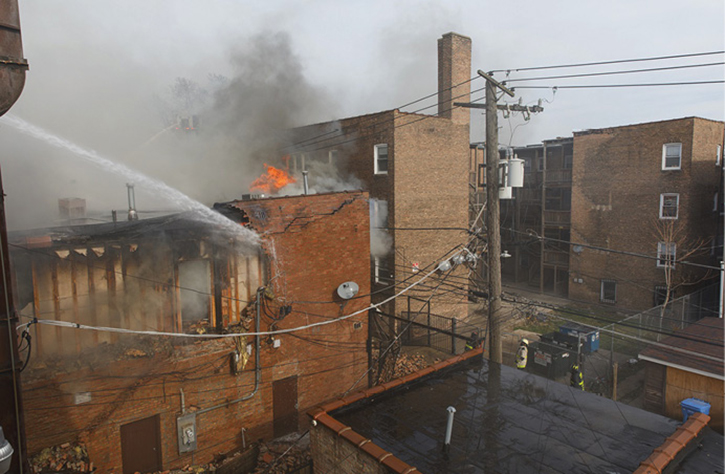 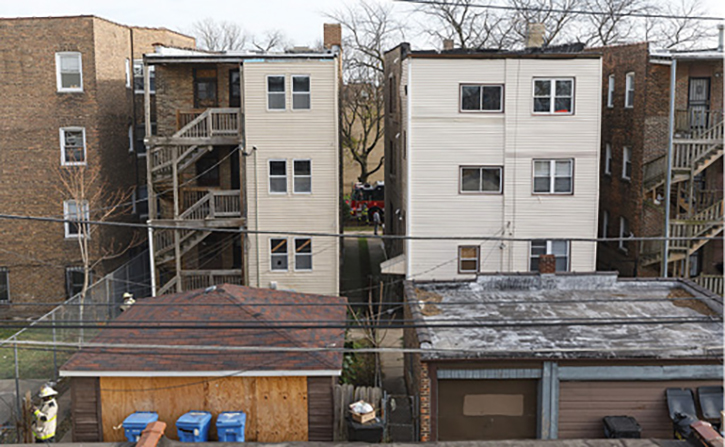 Another advantage of stretching to the rear through gangways is that lines will be in position if the fire threatens to extend to C-side exposures. Recently, the CFD issued to all of its engine companies a master stream device with one 2½-inch inlet capable of flowing approximately 400 gallons per minute. Although this volume of water is a fraction of what larger devices can flow, its size and weight give it mobility not readily achievable in larger devices supplied by large-diameter hose or two or more 2½-inch hoselines.

The city of Chicago has what is known as a “high-volume/low-pressure” water system. Water from intakes in cribs offshore of Lake Michigan is delivered through tunnels to water treatment plants. After treatment, water is pumped through massive arterial mains and distributed through smaller, albeit quite large, mains to hydrants and water customers.

An indication of the strength of Chicago’s water supply is that hydrants in the city have two 4½-inch “steamer” outlets. Whenever an engine company connects suction hose or a large-diameter supply line to a hydrant outlet, they connect their gate valve to the other outlet. This facilitates supplying another engine or one engine maximizing its water supply by connecting to an additional intake. Low residual pressure in Chicago’s water mains is insufficient to overcome friction loss in long lays of four-inch supply hose. Connecting supply hose directly from a hydrant to an engine pumping at a fire scene is restricted to first-alarm companies such as Engine 122 in photo 24. 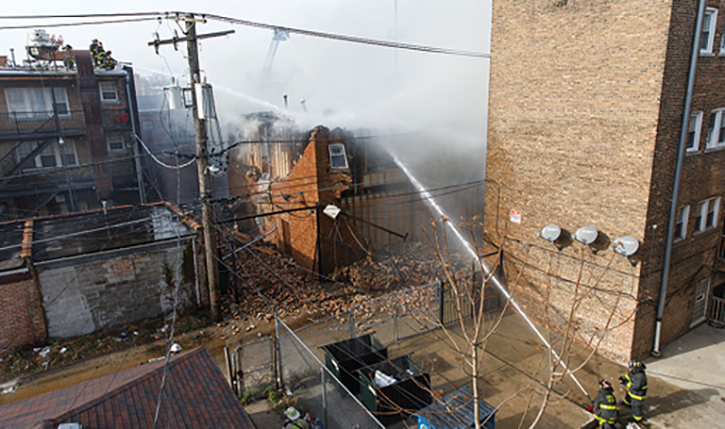 In Photo 25, Engine 93 is following the procedure of greater-alarm companies by connecting directly to a hydrant with six-inch-diameter hard suction hose. Clearly, the intention is not to “pull a draft” but to minimize friction loss by connecting a six-inch “pipeline” to the pump’s steamer intake. In Photo 26, the gate valve that this company connected to the other 4½-inch outlet gives them the option of maximizing the hydrant’s available water by connecting to a second intake on their pump. 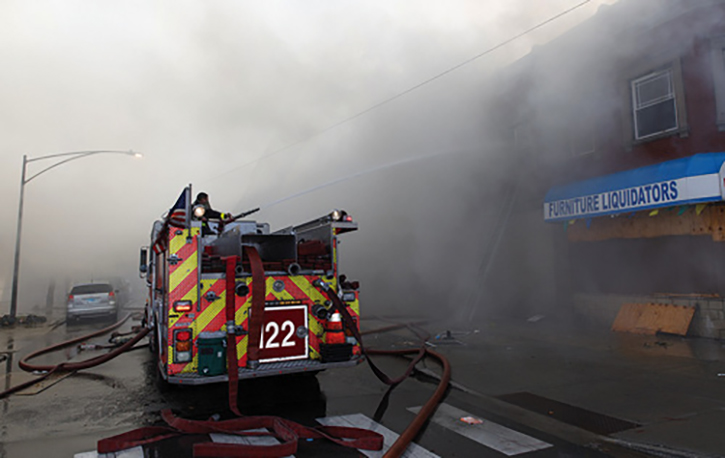 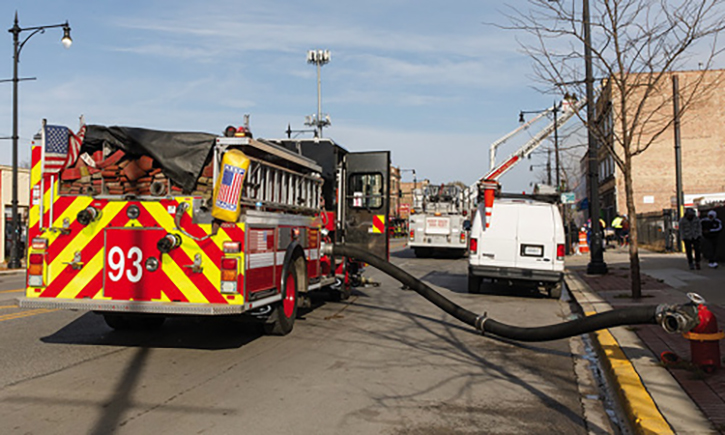 Thanks to a continuous, ongoing size-up, which led to the repositioning of personnel and apparatus, CFD firefighters successfully contained this fire to the building of origin with no injury to personnel.

BILL GUSTIN is a 48-year veteran of the fire service and a captain with the Miami-Dade (FL) Fire/Rescue Department. He began his fire service career in the Chicago area and is a lead instructor in his department’s Officer Development Program. He teaches tactics and company officer training programs throughout North America. He is a technical editor of Fire Engineering and an advisory board member of FDIC International.