The ability to think outside the box is an important skill in the world of emergency services. Firefighters need to think on their toes, act quickly, and constantly adapt. A motto I live by and pass along through teaching is there’s no such thing as “I can’t.” The person you’re there to rescue doesn’t want to hear you utter those words. I’m confident anybody reading this article doesn’t even have those words in their vocabulary.

I love facing a technical rescue challenge or even a simple problem and traveling outside that box to create a solution. But every now and then we all get a curve ball thrown at us that pulls us off the plate. Personally I thrive on these moments; for me they are fuel for the mind. Moments like this can only make you better at what you do. I’d like to share an outside-the-box moment I recently had in a rope class I was teaching. To me the best part of this experience was that the problem at hand had everyone thinking; everyone was attempting to push outside the box and solve the problem. In the end, the solution was so simple we had to shake our heads and laugh. This made a great point, though–you can sometimes fall into the trap of overthinking the problem and miss the simple answer.

A victim was suspended from a safety line located approximately at the 30th floor of a 50- story high-rise. Gaining access to the victim via windows was not an option. It was decided to lower a rescuer using a multi-purpose device (MPD) and connect a main and belay line to the victim. The top side (roof) rigging setup consisted of two mirrored systems. The rescuer and victim each had their own main line and belay line running through a MPD.(1). The main lines on both the rescuer and victim were pre rigged with a 5:1 mechanical advantage system (MAS) for a rapid conversion from a lowering operation to a raising operation. For those of you reading this who may not be familiar with the MPD, it provides you with the ability to perform three operations. Those operations are lowering, raising and belaying. It can be used in other areas such as the anchored pulley in a MAS, and its set-up time is amazingly quick. Because of that, we were able to provide the victim his own main and belay line without costing the operation any time. 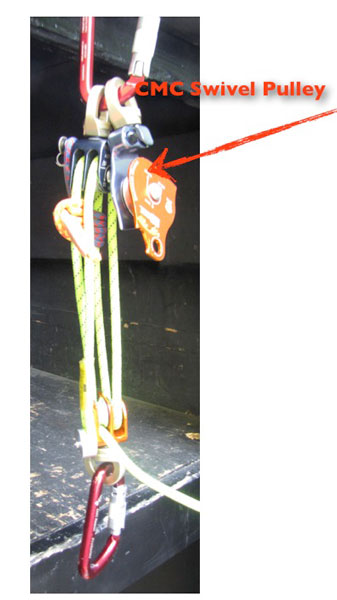 In this scenario, students were challenged to find a way to keep the rope off the wall. The two anchors they were given made doing so a seemingly impossible task. Setting a directional anchor to redirect the rope away from the wall wasn’t going to happen. Because of the target location in relation to the anchors, a directional was not an option. If you took an anchor from the right side and created a directional, you would accomplish the goal of keeping the rope off the wall. After a good brainstorming session, the smoke cleared and a simple solution became visible to me. I went to my trailer and came back with two pieces of cribbing (3). I simply placed the cribbing against the wall, and mission accomplished. I then decided to stack two pieces and run the rope through the groove in the cribbing. Such a simple solution I overlooked honestly because of its simplicity. I then decided to add two pulleys (4) as if it was a moving line, mainly to keep friction off the rope from contacting the cribbing edges upon entrance and exit. This was probably overkill, but it would be a problem I would address. 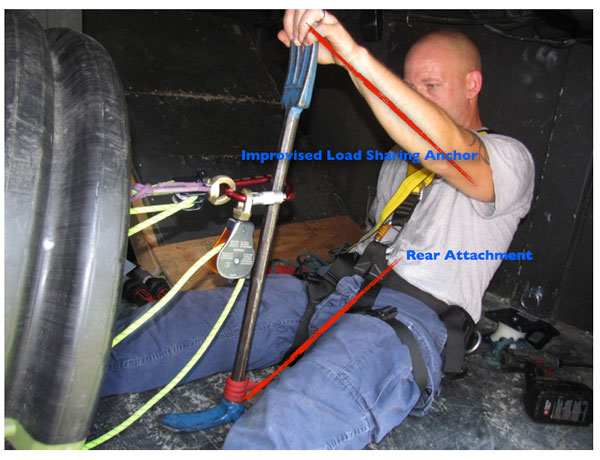 Sometimes a simple solution to your problems can be overlooked. A complicated problem doesn’t always mean it needs a complicated answer to solve it.

A second challenge that was presented was to create a load-sharing anchor that could be converted into a self-equalizing anchor using just one length of rope. In teaching I’ve found performing multiple tasks with the same length of rope stumps guys a bit. One of the first bits of knowledge I teach students is one length of rope isn’t limited to one operation. Looking at figures 4A-B, you can see what this looks like. 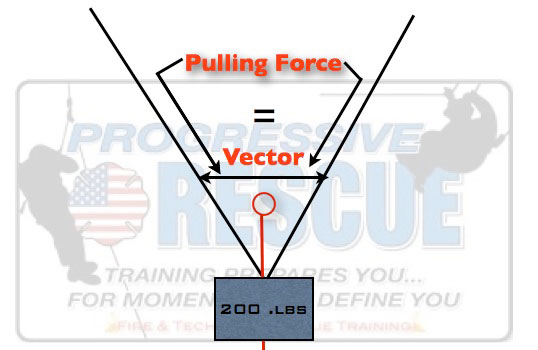 One feature I added to this system for ease of adjustment is a pair of tandem prusik on either leg of the anchor (5). The reasons for this are adjusting the length of the anchor legs via T3P makes it easier to equal the lengths. This also allows you to create slack in these lines when the system is converted to a self-equalizing anchor. These two connections now become the back up for the system. This task proves challenging to most classes only because you need to perform several different steps using one length of rope and create two systems that back each other up and at the same time are totally independent.

Knowing how equipment can be used and using some creativity will help you think outside the box every time. Sometimes we think the simple answer is the wrong answer just because it’s…well, simple. Before you disregard that simple idea, give it a fighting chance and look into it a bit. It may very well be the answer you’ve been looking for.

Mike Donahue has 17 years of fire service experience and has been a career firefighter in the city of Elizabeth, New Jersey, for the last 13 years, working out of Rescue Company 1 for the past 10 years. Mike teaches a Middlesex County College as an adjunct professor and acts as the Fire Service Program Coordinator. Mike is the owner of Progressive Rescue and can be reached at progressiverescue@gmail.com.

Fire at Los Angeles Church Ruled Arson But Church was Not...