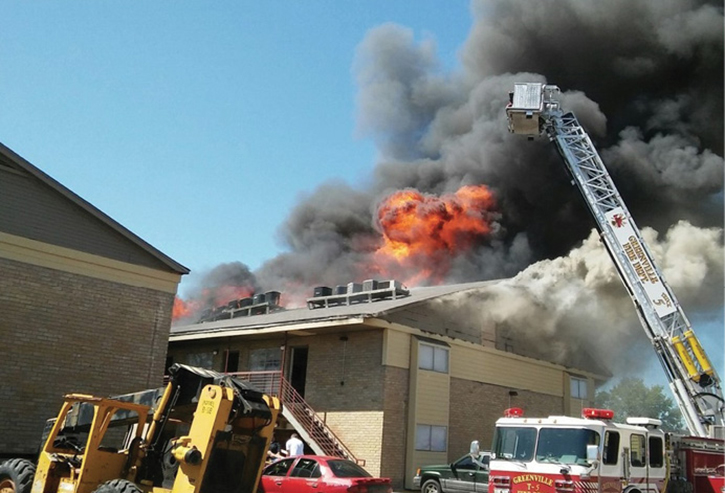 You don’t have to look very far on the Internet to find firefighters in rapidly deteriorating fire situations when conducting interior fire attack and roof operations. The National Institute for Occupational Safety and Health reports are plentiful of such examples. I won’t focus on why roof operations are important or how they should be accomplished but rather on developing your ability to read “red-flag” warning indicators before sending firefighters onto a questionable roof.

You must be situationally aware of key risk factors to make better decisions about placing firefighters on a potentially fire-weakened roof. If you don’t understand the risk, you can’t effectively manage the risk. Just as reading, writing, and arithmetic were the foundations of education, a great foundation for risk management are the “3 Rs” of size-up: reading the risk, reading the structure, and reading the smoke.

Making the Most of Roof Operations

On April 3, 2016, the Greenville (TX) Fire Department was dispatched to a kitchen fire on the second floor of a two-story apartment complex built of wood-frame construction. Although the kitchen fire was contained quickly, it had already extended into the ceiling space above. Unknown to firefighters initially, this structure’s original roof was a flat, built-up roof; a secondary gabled roof built of lightweight wooden truss construction had been added over the existing flat roof years later. This created a void space above the flat roof that was inaccessible from below. 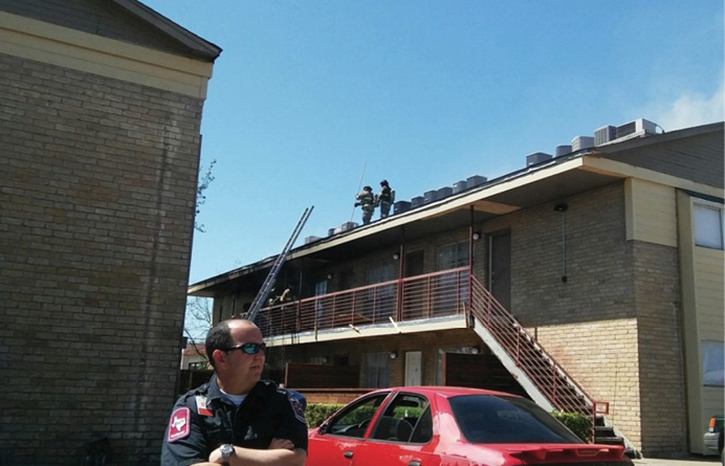 (1) Firefighters attempted to access the fire below the peaked roof. [Photos courtesy of the Greenville (TX) Fire Department.]

A primary risk factor to consider prior to allowing crews to operate on the roof is whether or not the fire has weakened the structural support system. Significant or heavy fire involvement of the structure’s attic or floor void space is a red-flag warning sign for firefighters and a critical development for which the incident commander (IC) must be alert and advised on. I have witnessed well-intentioned firefighters going onto a roof built of lightweight wood-frame construction of a heavily involved, self-vented attic fire to conduct roof operations. Frankly, there’s a real problem with that! Firefighters have lost their lives falling through these types of lightweight engineered wooden roofs because of poor decision making, complacency, and lack of understanding of the risk involved. 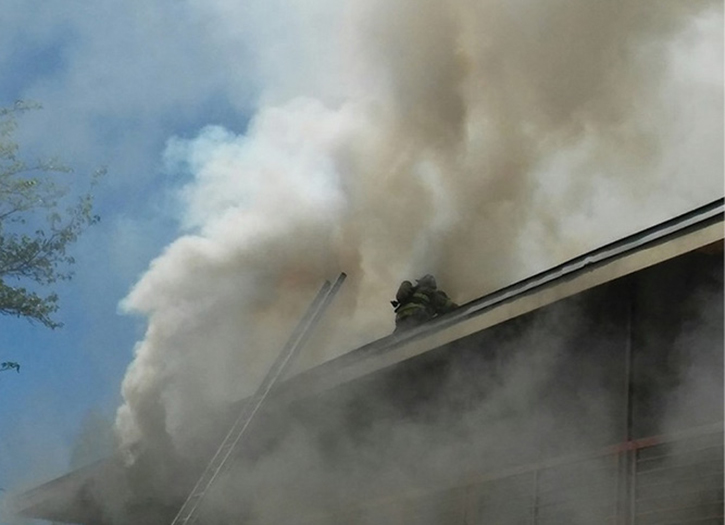 (2) Minutes later, firefighters were injured after falling through the peaked roof

(3) Heavy wind-driven fire involvement of the roof occurred less than a minute after firefighters self-extricated.

Aggressive firefighting tactics are the gold standard for offensive firefighting operations. However, it’s a matter of risk vs. gain, knowing when and where to be aggressive and when and where not to be so aggressive. Any type of roof support system that is heavily involved and has fire venting through the decking is a major safety concern. A building that is a total loss when you step out onto the roof is still going to be a total loss when you get off.

Aggressive firefighting has been a hallmark of the American fire service. Today, we must base the concept of aggressive roof operations on an understanding of fire dynamics and building construction. Fire officers must understand this concept and be able to predict what the fire and the building will do before committing firefighters onto the roof. Because 21st century fuel loads and building construction materials continue to evolve, the net result is faster developing fires, faster time to flashover, less time for occupants to escape, less time for firefighters to make entry to find victims, and faster failure times for roof and floor assemblies.

Vertical ventilation or trench cuts are performed to support offensive fire attack operations. When you declare defensive operations, clear the roof of personnel immediately and establish and enforce a collapse zone.

Remember, size-up is a continuous process until the incident is terminated. What are your “trigger points” in determining whether or not you can safely conduct or suspend roof operations? The skill of the 3 Rs is only sharpened through use.

GARY BOWKER is an honorably retired U.S. Air Force master sergeant and has served as a fire chief at numerous U.S. Air Force bases around the world. He has also served as chief of the Sumner County (KS) Rural Fire District #10. Bowker is a retired fire marshal and safety officer with the town of Winfield, Kansas, and has more than 45 years of fire service experience. He has also taught numerous courses for the National Fire Academy, the U.S. Department of Defense, the University of Kansas Fire & Rescue Training Institute, and FDIC International. Bowker also serves as a Kansas advocate with the National Fallen Firefighters Foundation’s Everyone Goes Home program and speaks frequently at events. He has written numerous articles on firefighter life safety and health issues and has been published in numerous fire service trade magazines. Bowker is nationally certified as a fire officer II, instructor II, and inspector II and is a certified fire and explosion investigator.