Scenario: You respond to a working fire and, on arrival, find fire showing from a second-floor window of a residential structure in an older area of your district. You stretch to the front door, charge the line, and head up the stairs to the hallway. You knock down fire and feel great about your accomplishment.

Outside at rehab, while you are changing cylinders, you notice smoke coming out the eaves and becoming heavier. Before you know it, the whole house is enveloped in heavy heat and smoke. This will soon become a well-involved fire, and you will need defensive operations to control it.

You ask your boss, “What happened, Cap?” The captain barks back, “Balloon frame, kid.” You wonder how a fire can spread so fast, but then quickly forget about it and go about your remaining shift.

We have all seen video or experienced on scene when the fire travel in a building takes you or command by surprise, but we must always be alert and pessimistic in our approach. The building and, most importantly, its construction drive our tactics; the quicker you can recon the building and determine such items as possible void spaces, large spans, and nonpartitioned cocklofts, the better for all involved.

The legacy dwelling can be a complex size-up, so commanders can get lost because we fail to anticipate where the fire is going to be. Sometimes, we worry too much where the fire is currently at or we eat up our resources in the fire attack and lose the battle when we run out of firefighters to get ahead. These buildings also feature legacy items such as pocket doors, which will allow fire spread to the upper floors at a lightning pace. A good rule of thumb in a working fire in a balloon frame is to hope one line extinguishes the fire, but prepare and have the resources and water supply to lay three lines. 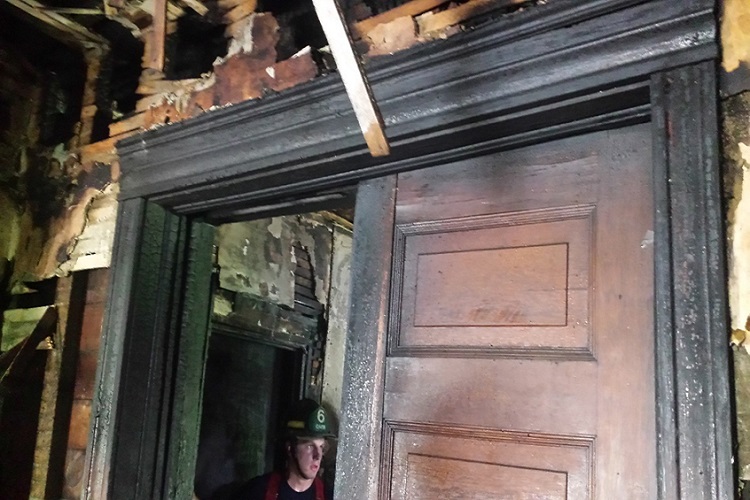 (1) It’s not just the outside walls you have to worry about in older legacy homes. You must open up areas around pocket doors as soon as possible. (Photo by author.)

The next video shows sizing up and discussing with your companies fires in a balloon-frame building:

One of the toughest and most staffing-intensive events is when fire gets into the cockloft or common attic space of a structure. The key here is to know what buildings in your jurisdiction or response area have common attic spaces or cocklofts without fire stops. However, we commonly fail to understand the dynamics and speed at which the fire can move in an open space below the roof. This past April, a department near mine responded to a very unusual event: a police standoff where the suspect ignited the apartment prior to his arrest. The fire department was on scene staging, and although they set up fairly quickly, they failed to get ahead of the fire, and it eventually burned off the roof. Dozens were left homeless, and their possessions were lost.

The “moth to a flame” syndrome can sometimes catch us, and as a commander it can be very difficult to place your resources in areas other than where the fire is when you arrive. However, when you are limited in staffing, it may be wise to surrender an area that is already burning and commit forces in a flanking or cut-off position. The key is knowing the location of the fire and getting far enough ahead to cut it off while taking into account environmental factors such as wind.

In this overhead view I have illustrated where the fire first started, second floor of a townhouse configured garden apartment with a common cockloft, click HERE for video of this fire. 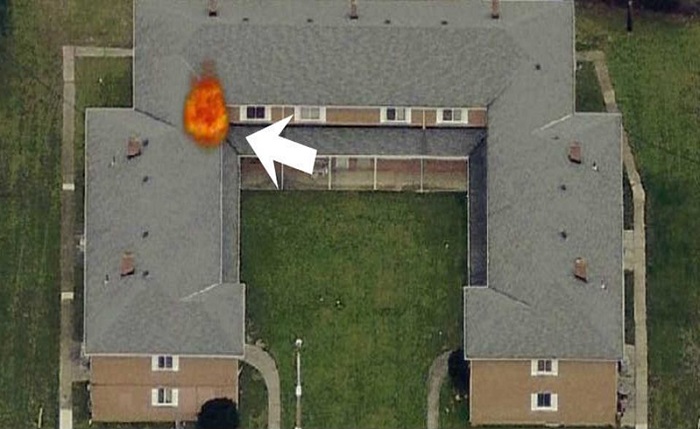 On a warm summer morning in Brooklyn, New York, on August 2, 1978, a collapse occurred which claimed the lives of six Fire Department of New York (FDNY) members, and more than 30 were injured (according to news reports). Although the years have passed just like for any other major event in our profession, the members’ legacies and the lessons learned should never be forgotten. Sadly, most members today, many of whom weren’t even born yet, have no clue as to what took place. If one of those members is you, I would like to briefly enlighten you and give you some incentive to study this incidcent further.

The fire started at 8:40 a.m. in Waldbaum’s supermarket, located at 2892 Avenue Y and Ocean Avenue in the Sheepshead Bay section of Brooklyn. Workers were busy renovating the then 26-year-old structure when they discovered fire in a mezzanine area. The building was of ordinary Type III construction, with exterior masonry construction with large span wooden timber trusses. The truss system supported an ornamental tin ceiling. Eighteen inches below that concealed space was a conventional suspended acoustic ceiling tile panel system. The tin ceiling was attached directly to the bottom cord of the truss system. The large mezzanine area was located along the D side, and access through the truss loft area was accessible through manual doors at the plane of each truss (see animation from Chris Naum www.buildingsonfire.com).

There are numerous accounts located on the internet that do a wonderful job recreating the scene, giving the reader tons of great information to share; I have attached some links below to make it even easier for you. The key to this article is to get your thoughts moving toward the need to preplan your response area’s buildings—especially those of legacy construction—and truly understand how void spaces can contribute to fire spread and collapse.

When reading the different accounts of this incident, many will want to discuss the rain roof that was part of this structure. Although it’s correct to debate because it played a part, focus on the voids and storage in the truss system and how they may contribute to building failure during a fire, especially in ordinary construction. Also, illustrate to your younger members how to properly identify and size up large spanned buildings from the exterior. Ask your members today at the table what a pilaster is. Many firefighters are taught that trusses are “bad,” but yet we get “lost in the fog” when we fail to give them the tools to adequately size up the exterior of a structure and put the pieces together quickly and safely on the fireground. We owe it to the six brothers who perished that warm summer day many years ago. May they rest in peace and never be forgotten.

Another example is to be found at the Southtowne Lanes Bowling Alley fire in Eugene, Oregon, on August 5, 2015.

JOSEPH PRONESTI is a 26-year veteran of the Elyria (OH) Fire Department, where he is an assistant chief and shift commander. He is a graduate of the Ohio Fire Chiefs’ Executive Officer program and a lead instructor at the Cuyahoga (OH) County Community College Fire Academy. He is a contributor to fire service publications and sites, including Fire Engineering. He can be reached at efdcaptain33@gmail.com.

THE ‘FOG’ OF THE FIREGROUND

Part 2: Communications on the Fireground

Cardioviva and NVFC Partner to Educate Firefighters and EMTs