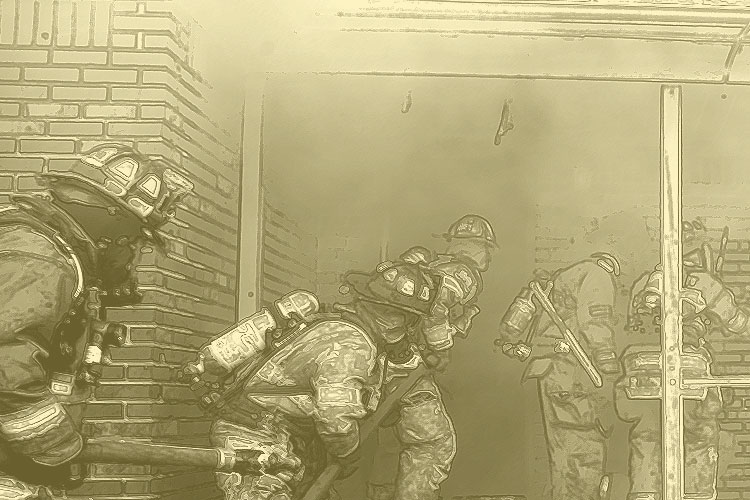 Probably the most common use for the second handline is as a backup line, especially when it comes to fires in private dwellings. In such cases, the mission of the second handline is to support the initial attack line, not operate alongside it. Although all firefighters want to advance the hoseline to the fire area and attack, when assigned to the backup line, firefighters must be able to control this urge and instead focus their actions on the mission of supporting the initial attack line. Backup line firefighters should not allow themselves to stray from their responsibilities.

When using these rules of thumb, the company officer must remember that the estimates are only of the fire building itself; they must also estimate the distance from the apparatus to the building entrance and then add that length to the hoseline.

Another method for estimating the stretch is to break it down into three sections:

Beginning at the fire area and working backwards to the apparatus, the company officer can then size up the building and estimate the proper length for the hoseline. When using method, the company officer should ensure that at least one length of hoseline (50 feet) is provided for the fire area itself. At least one length of hoseline (50 feet) should also be provided for each floor from the fire area to the building entrance. Finally, the amount of hoseline needed to span the distance between the building entrance and the apparatus must be determined. These three sections are added together for the final length.

The second handline can also be used as a second attack line—a very different function than operating as a backup line. The three most common reasons for this decision is the ineffectiveness of the initial attack line, the likelihood of fire spread, and the presence of a large basement/cellar fire. When operating as a second attack line, the second handline may operate alongside the initial attack line or it may operate remotely, depending on the needs of the incident.

During interior firefighting operations, the second handline can operate as either a backup line or a second attack line. Firefighters should be comfortable in performing either operation as well as understand when each operation is necessary. Members must also understand the importance of their role in each operation in relation to the overall fireground operation. A backup line that positions itself in the way of the initial attack line is ineffective and a detriment to the overall fire operation, as is a second attack line that is not advanced into the proper location. You cannot always be first in; understand the operation of the second handline so that you can effectively support or supplement the initial attack line.

Anthony Rowett Jr. is a captain with the Mobile (AL) Fire Rescue Department. He was previously a firefighter for the Ogdensburg (NJ) Fire Department. Rowett has an associate’s degree in fire science technology from the County College of Morris in New Jersey and a bachelor’s and master’s degree in fire science and emergency services management, respectively, from Columbia Southern University. He has been published in Fire Engineering and Fire Rescue. He can be contacted at arowett88@yahoo.com.

Effective Training: Getting Out of Your Comfort Zone

Attitude: The Driving Force in the Fire Service

The Importance of Preassigned Responsibilities