It is three o’clock am, and you are responding as the first due truck company for a phone alarm reporting a possible structure fire. As the officer, you exit the rig and proceed to size- up the building, a four story brick multiple dwelling with a front fire escape. Smoke is pushing from the third floor on the Exposure 4 (“D” side) of the building.

You enter the vestibule and are met by civilians trying to exit the building. You order the can firefighter to chock the outer door while you take care of the inner, entrance door. This simple step assures us the engine company should have access to the building. As you climb the stairs, a medium smoke condition is visible from the third floor landing. You notify the engine boss that he has a “well hole.” This notification will aid the members of the engine in their stretch, as they will now require fewer lengths of hose. The fact that the (well) is being used will also improve conditions and congestion on the staircase.

Reaching the third floor landing, you are met with smoke banked down a foot off the floor. You find the inner wall and proceed to follow it towards the front of the building. The smoke is a dark, black color. Through experience, you know this a synthetics-fed fire. The smoke is enriched fuel and much more toxic than the brown smoke we see with ordinary combustible con- tents. Finding the apartment door, you are able to tell it is locked: You can feel the presence of several locks. Earlier in the evening, your crew trained on forcing the same type of door during drill, and know that this should be a text book operation in forcible entry. 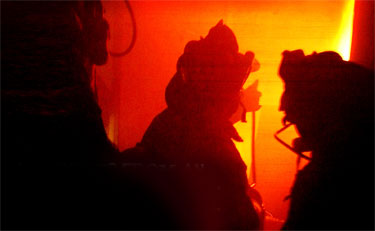 You order the inside team (can and irons firefighter) to “take the door.” As the officer, you step to the side to give them some room to work. You feel the door of the adjoining apartment: The door is locked, but has some “play” in it. Using your officer’s tool, you apply the adz end of the Halligan to the upper part of the door jamb: Applying downward pressure and moving the tool lower, you are able to gap the door. The chock in your helmet is used to keep a purchase point while you reposition the officer’s tool. A class you took several weeks earlier taught you to keep one chock angled under the rubber strap of your helmet with the substantial end facing out. With ease, you are able to remove the chock without disrupting the rest of your helmet assembly. The door is easily forced using downward leverage – and is controlled. You open the door and apply the dead lock. The door will now not re-lock on us and an “area of refuge” has been secured for you and the balance of the inside team.

Turning your attention back to the inside team, you can hear solid thuds as the axe meets the Halligan tool. Your irons firefighter says his Halligan is not budging. Through the use of senses, we know that the solid thud (sound) and the lack of tool movement (feel) indicate that the Halligan needs to be repositioned for a better purchase point. The team does this and almost instanta- neously, the Halligan begins to slowly glide along the door jamb and a “hollowed” sound is heard, indicating to you that a successful purchase point has been made. Using your officer’s light, you direct the beam onto the door where the action is taking place. Illuminating the door jamb at the point of entry assists the members greatly in their task at hand.

The door forces open, however, only about two to three inches. Resistance is felt: Your irons firefighter determines that a chain is being used to secure the door against potential burglars. The chain is “usually” a good indicator that it has been secured from the inside and a potential victim could be within. Newer devices on the market today can be used in which the chain can be applied as the tenant leaves and secures their door. Using the point on the Halligan, the irons firefighter is able to manipulate his tool behind the plate that holds the chain to the wall. Little effort is needed to strip the wood screws from their set-mounting, and defeat this security device.

The door starts to lunge open – the irons firefighter uses his Halligan to control the door. The inside team is ready to commence their search. Moving into the apart- ment, you apply the spring clip you bought at the Home Depot® to the lower portion of the door. The door is able to be partially closed without locking. The smoke condi- tion is somewhat limited to the fire apartment, but more importantly, the air flow coming into the apartment is controlled. In today’s fire environment, we know that limiting air flow to the fire area will buy us needed time to conduct our rapid search for victims. The use of synthetics creates a smoke condition 500 times greater than ordinary combustibles. Flashover is occurring in time ranges less than four minutes in duration from the time of ignition. 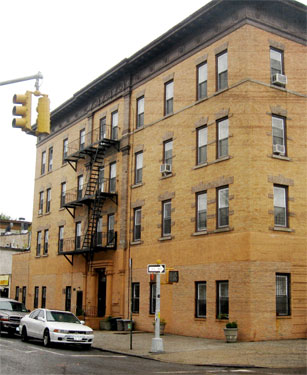 Crackling is heard towards the rear of the apartment. Using the thermal imager confirms your suspicion that the fire is coming from a rear bedroom. Heat waves are traveling across the ceiling and are getting close to lighting off. Reaching the bedroom threshold, fire is now licking out of the room. The can firefighter directs his stream at the fire pushing it back into the room. You try to close the door but realize that it is missing. On the opposite wall, you find a room with a door intact. Taking your officer’s tool, you stick it in between the door and jamb and close the door upon itself. This action strips the screws from the hinges making it possible now to use the door as a shield over the fire room.

The engine can be heard at the front door. You radio to the boss your location and they quickly move the line to your position. Water is on the fire. You notify com- mand of this and that primary searches are underway. The sweet sound of breaking glass is heard as the outside vent firefighter takes the windows off the fire escape. The irons firefighter can be heard from the bathroom saying he has a “10-45,” your radio code for a victim found. Directing the can firefighter to continue searching under the supervision of the engine boss, you proceed to the bathroom to assist the irons fire- fighter with removal while notifying command over the radio of the victim. The removal of the 300lb person is smooth: The irons firefighter created a ‘choker’ out of his twenty foot piece of tubular webbing and applied it around the victim’s chest.

The hallway is an absolute mess: You attempt to remove the victim over the hose line and through the wave of firefighters attempting to either move the line or get into their positions. Realizing the staircase is also a log jamb, you decide to use your officer’s tool to remove several wood balusters from the railing. Performing this now allows you to quickly pass the victim down below the fire floor into the hands of other firefighters that remove him to the street. Returning to the fire apart- ment, you hear the engine boss announce over the radio that the main body of fire has been knocked down. The outside vent firefighter bumps into you and informs you that his search of the front rooms is nega- tive. Seconds later, the can firefighter notifies you that his search of the rear rooms is complete and negative. Primary search of the fire apartment is now complete. You notify command of the outcome of your search.

Command advises you to “come on down and take a blow, job well done.” Leaving the apartment, the relief truck meets you in the hall. The transfer of information takes place between you and their boss. Location of the fire, where the victim was found and what was opened up or should be looked at during overhaul.

Successful operations such as this fire are the rewards of constant training, and teamwork. Size-up should be completed by ALL MEMBERS. The outside of the building provides us with many clues: The number of windows, security devices and fire escape position- ing will aid us greatly in a rapid but thorough search process. Muscle memory is the key to proficiency. At three o’clock a.m. in the hallway of a burning tenement is not the time to wonder which end of the tool goes into the jamb. Drilling constantly on the basics of forcible entry and search are vital to success. Using the senses of hearing, feeling and if possible, seeing, will aid us in our attack of the door. When operating on the floor above, use these same senses to gauge what us going on below you on the fire floor. Difficulty in forcing the door may be the hint for you to either secure an area of refuge quickly or move your team off the floor above. 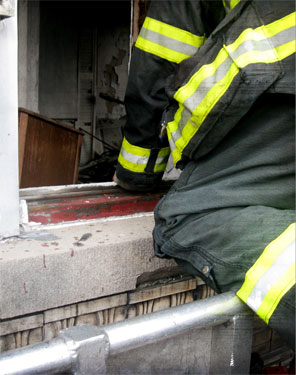 The chocking of the fire apartment door should always be low. There is no exception. Whether using a chock, spring clamp or flat head axe, if removal is needed to confine the fire area a firefighter should be able to perform this without standing up or using a tool. Remember when searching, that we should call out in the fire apartment to our possible victims. A simple “fire department, anyone in here” could be the saving grace words to an almost unconscious victim that is in need of your help. Talking amongst the search team will also keep members calm and oriented with the location of each other.

To be a “positional firefighter,” one must constantly strive to size-up the situation at hand, and be able to adapt to the “curve balls” we may face on the fire ground. Understanding the basics of the task you have been assigned – along with size-up issues – should be constantly enforced. Whether conducting drill, building inspection, or on one of our run-of-the-mill emergencies, learn your buildings. Review the route you may take to get to your position. Now is the time, not three o’clock am!

MARK GREGORY has 26 years of firefighting experience and serves as a lieutenant in the Fire Department of New York, where he has been assigned to Tower Ladder 111 for the past nine years. Previously, he was a firefighter on Rescue 2 and Ladder 132. He instructs at the FDNY Academy as an Annual Education Day and extrication instructor, at the Suffolk County Fire Academy, and nationally as a member of P.L. Vulcan Fire Training. He has risen through the ranks in East Quogue, where he served three years as chief and is now a fire commissioner. He writes regularly for fire service magazines and Web sites; he is a cohost on Fire Engineering Radio.