In our last few articles, we have looked at vertical ventilation and how it benefits firefighters when it comes to fireground operations and tactics. We also examined how to make a louvered cut, which is the most common cut made today whenever we are on the roof ventilating. As mentioned previously, we cannot always make it to the roof. This is usually because of safety concerns about potential roof collapse because of the progress of the fire in relation to the structure. Venting vertically is not the only choice we have; we can also use horizontal ventilation.

The purpose of horizontal ventilation is the same as vertical in that we are removing heat, unburned gas, and smoke and replacing it with fresh air. The benefits of venting horizontally are as follows:

There are different ways to ventilate horizontally. One way is to vent as you go. This tactic is performed by either interior or exterior crews taking out windows and using natural air currents. For interior search crews, they can open or take out windows as they perform their primary search as long as it does not create a flow path or close doors to stop the flow path. For the exterior crews performing this task, they will take out the windows using pike poles, roof hooks, and ground ladders or aerial devices for access to upper stories as part of a coordinated effort.

Another way of ventilating horizontally is by mechanical means. This is accomplished by using either a negative pressure or a positive pressure fan. These devices are used in speeding up the venting process from within a structure by enhancing air flow: general air flow created by our newer mechanical devices range between 2,000 and 9,000 cubic feet per minute. When used correctly and in a timely fashion, mechanical horizontal ventilation can be very effective.

Negative pressure fans can be hung up high in a door way or in a window, or they can be located down low resting on the ground or window frame. Ideally, the fan should be located up high to take advantage of where the heat and smoke will be. Sometimes this is not possible, so locating the fan down low will suffice. The time it will take to ventilate will be a little bit longer. Normally, negative pressure fans are not set up until after the fire has been suppressed and our main concern is removing the smoke.

The other mechanical way of ventilating horizontally is by using a positive pressure fan (PPV). These newer types of fans are powered by gasoline engines and electrical motors. The air current created is vast compared to a negative pressure fan. Using a PPV fan is only to be used after the fire has been suppressed and extinguished. Essentially, PPV is a “postfire ventilation” tactic.

We are seeing more use of PPV integrated with our fire attack than we do with negative pressure. There is a tactic of positive pressure attack which incorporates using a PPV fan along with hose advancement. This tactic has been developed out of Salt Lake City, Utah. 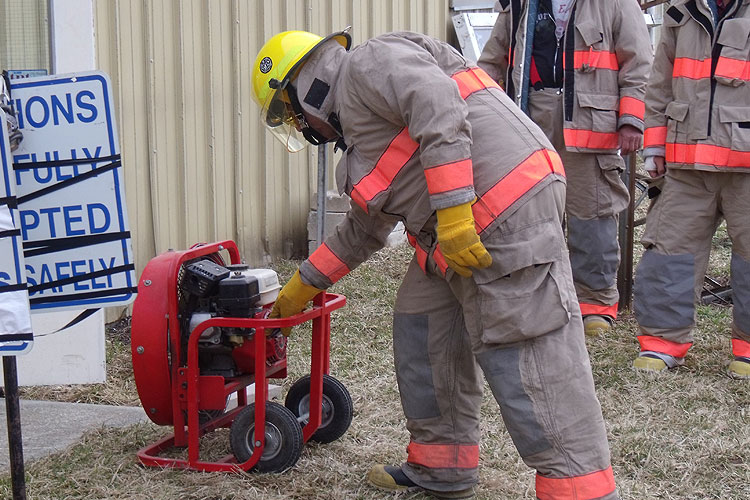 To set up a PPV correctly, the fan needs to be placed in front of a large opening such as a door. The size of the fan will dictate the distance back from the door. Usually six to eight feet is the average. Once the fan is set in place, it will need to be started. Be cautious about starting the fan with dangling straps from the helmet or gear hanging over the fan itself. The firefighter in photo 1 has no dangling straps hanging over the fan which can get caught in the fan blades. 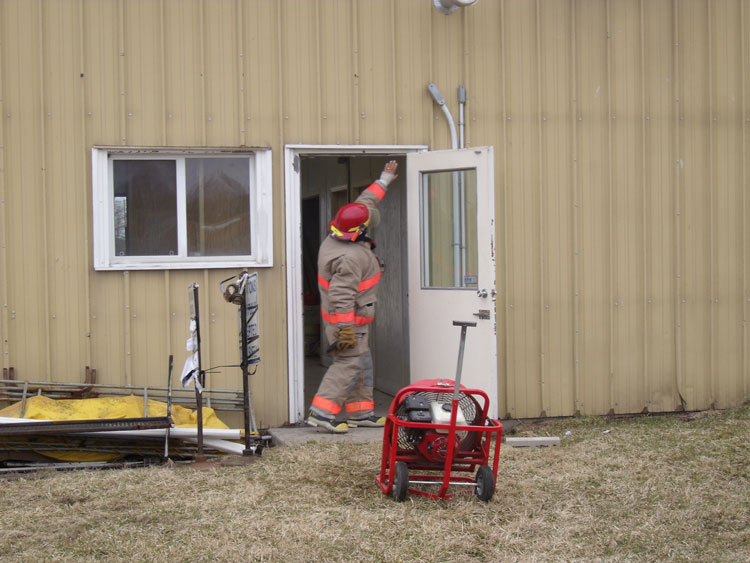 Once started, make sure the fan is operating a full throttle. It will now be time to check to see whether the cone of air being produced by the fan is surrounding the door opening. This is done by placing an ungloved hand at the corners of each door as seen in photo 2. If you feel the cone of air at each corner, then the fan is placed at the correct distance back from the door. If you cannot feel the air cone, then adjustment of the fan needs to be made. When moving the PPV fan closer or further back away from the door, be careful not to jerk it around too quickly. The speed of the fan blade turning in a clockwise direction has a lot of force being created on the axle. When left alone and operating, the PPV fan will spin as designed to. When moved around in a jerky or quick fashion, opposite forces are being exerted on the axle with a fast-moving blade spinning at a high rate of speed. It would be very easy to shear off the fan blade from the axle. The housing around the blade will not be sufficient to contain a disengaged fan blade.

Once the PPV fan is in the correct position and pressurizing the structure, an exit opening needs to be created near the seat of the fire. The exit opening needs to be about ¾ to 1½ times the size of the entry opening. The exit opening created near the seat of the fire will allow for quick removal of smoke, unburned gases, and heat from inside. Systematic removal of the same products from the rest of the structure can be achieved by opening one exit opening at a time to clear out other rooms. One downside to using PPV is that it can intensify the fire by introducing a large amount of fresh air to it and push it in an unwanted direction. This operation needs to be coordinated with the interior hose crews to ensure that fire growth does not happen.

Mark van der Feyst has been in the fire service since 1999 and is a full-time firefighter in Ontario, Canada. He is an international instructor teaching in Canada, the United States, and India, and at FDIC. He is a local level suppression instructor for the Pennsylvania State Fire Academy and an instructor for the Justice Institute of British Columbia. He is also the lead author of Residential Fire Rescue (Pennwell).

Man Pleads Guilty to Deaths of 36 People in CA Warehouse...