This month’s article will pertain to fire departments that have buildings within their response area equipped with either a single or multiple standpipe system(s). Although we tend to associate standpipe systems with big cities or high-rise buildings, you will be surprised to see where they are located in smaller settings. It is not uncommon to find these types of systems in industrial buildings, parking structures, shopping malls, warehouses, bridges, and tunnels. Large outdoor yards used for storage or as part of the process at the facility can also have a standpipe. Many facilities and buildings will be equipped with a standpipe system based on building code, fire code, or insurance requirements.

Standpipe systems are used in a multitude of buildings. For instance, in my previous days working for a fire protection company, I designed a standpipe system for Weyerhaeuser in West Virginia for their exterior yard, where they stored the incoming trees used for making oriented strand board sheets for Dupont for their two-story building in Parkersburg, which also housed a Teflon process machine, PNC Park, Mellon Tower, and a Pennsylvania state prison.

A standpipe system is defined by National Fire Protection System 14, Standard for the Installation of Standpipe and Hose Systems, as, “An arrangement of piping, valves hose connections and allied equipment installed in a building or structure, with the hose connections located in such a manner that water can be discharged in streams through attached hose and nozzles, for the purposes of extinguishing a fire, thereby protecting a building or structure and its contents in addition to protecting the occupants. This is accomplished by means of connections to water supply systems or by means of pump tanks and other equipment necessary to provide an adequate supply of water to the hose connections.”

It is, essentially, a way of delivering water from one area of the structure or facility to another so that we can fight the fire while at the same time shortening the length of the supply and attack lines. Standpipes can be an intricate or simple system, but the result is the same: water delivery. These systems can be vertical (which is the common type) or they can be horizontal.

Following are four types of standpipes that you will find in use:

There are three classes of standpipes found within buildings: Class 1, 2, and 3. A Class 1 standpipe is designed for firefighting personnel only as it is equipped with just a 2½-inch outlet (see photo 1). 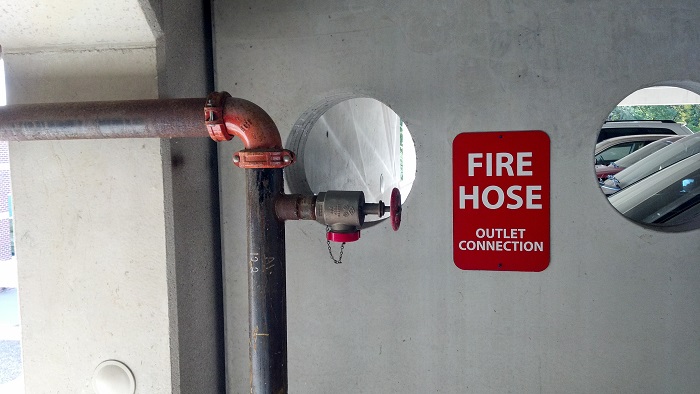 This outlet can be in a stairwell, in a cabinet in the hallway, or standing alone by an I-beam in an open area. The outlets provided with this class of standpipe can also vary in design. Some will have a pressure-reducing device/valve attached to it to help regulate the discharged pressure from the system.

A Class 2 standpipe is designed for building occupants only (photo 2). 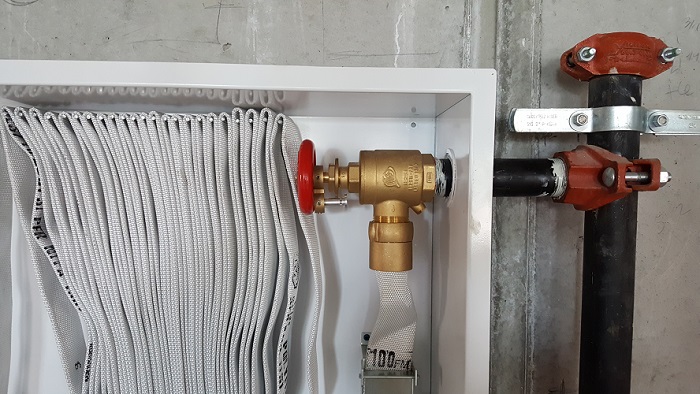 This standpipe system houses 100 feet of 1½-inch hose attached to a reduced standpipe outlet. The Class 2 system allows occupants to safely escape the area of concern using the hose to provide a safe passage way by protecting the means of egress; it is not designed for fighting fires. Firefighters can hook up to this type of standpipe, but it would involve undoing the occupant hose system and exposing the standpipe’s 2½-inch outlet or securing the 1½-inch outlet and then using an adaptor to go up to a 2½-inch hose connection (photo 3). For the fire departments that still use 1½- or 1¾-inch high-rise hose kits, they can connect directly to the 1½-inch outlet. 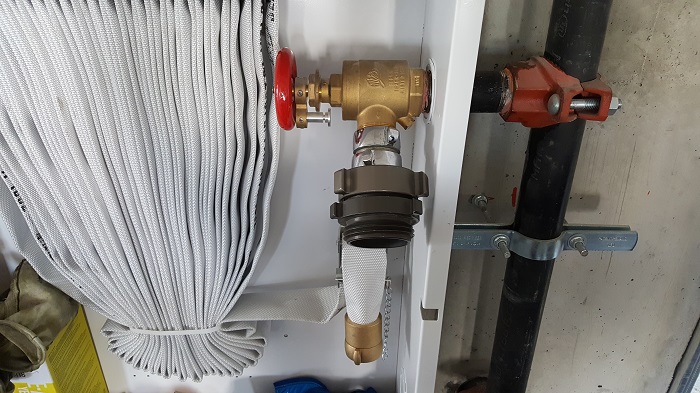 A Class 3 standpipe is a hybrid version of Class 1 and 2 (photo 4). It contains an exposed 2½-inch outlet as well as occupant hose. These types of standpipe systems are very common in buildings where occupant load is consistent daily. Photo 5 shows a variation of a Class 3 standpipe; it only has one valve, but the option is there to supply a 2½- or a 1½-inch hose. 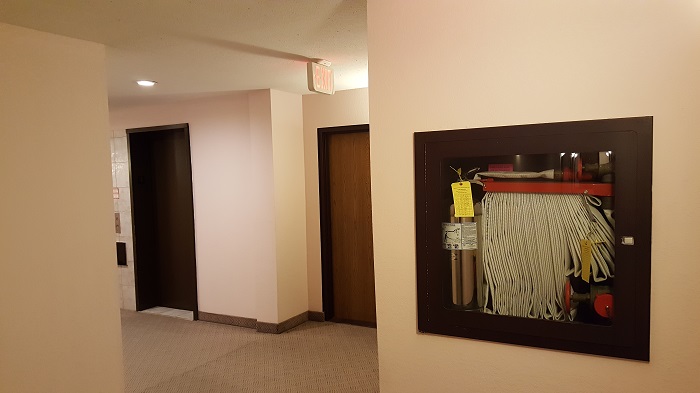 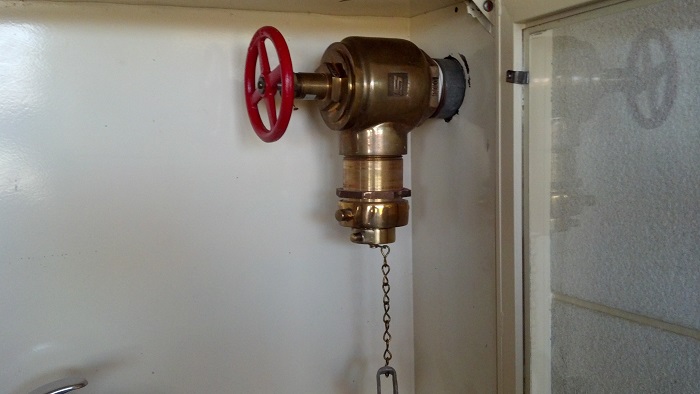 The most common FDCs we will encounter are the (two) 2½-inch inlets going to a Siamese clapper on the interior, then on to a four-inch pipe. We are now seeing single inlet FDC’s with a Storz fitting. This can be a four-, five-, or six-inch inlet, depending on the fire department’s requirements. The single FDC inlet is much easier and quicker to secure with the hose than the usual two-inlet type.

When connecting to the FDC, ensure that no debris is inside the FDC female couplings. This is common, as young kids can stuff things inside for fun. The FDC will be labelled “Standpipe System” right above the two outlets (photo 6). 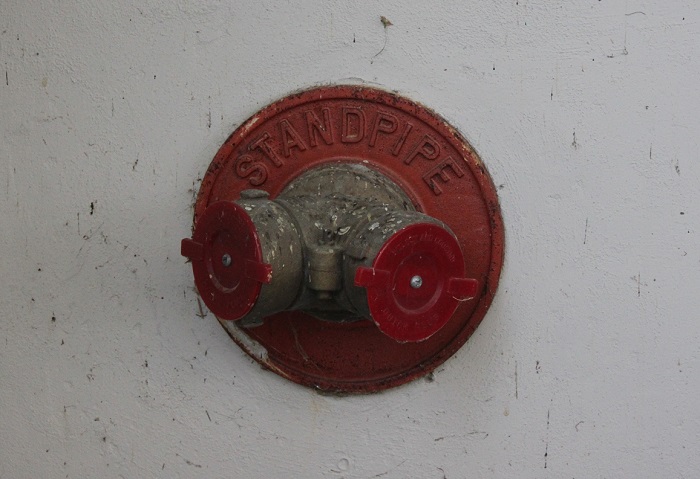 This label lets you know which system to tie into as there could also be a sprinkler system in the building as well. Sometimes there are separate FDCs for each type of system, and sometimes there are blended FDCs for all of the systems (Photos 7, 8). Either way, the FDC will be labelled. 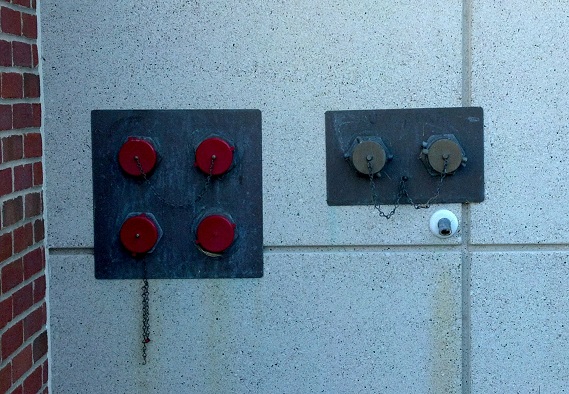 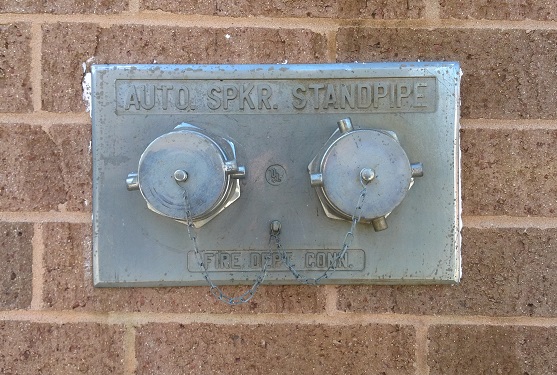 When supplying the water or increasing the pressure inside the system, do this gradually (as opposed to quickly). Standpipe systems are a series of pipes that sit there and wait for use. They are sometimes filled with water or air and, after years of inactivity, they can deteriorate. Creating a water hammer in the standpipe system will allow only deteriorated pipes, pipe couplings, or standpipe valves to malfunction, creating more problems for the operation.

Get to know what types of standpipes are in your response area and familiarize yourself with making the connection to the FDC and the standpipe outlet using your department’s equipment.