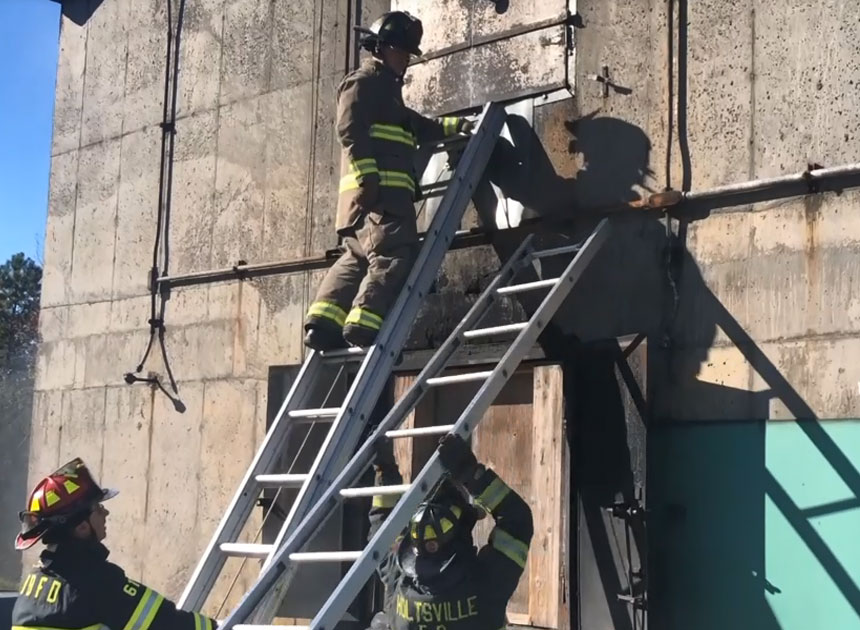 A firefighter enters the window off a portable ladder into a heavily charged bedroom on the second floor for a confirmed life entrapment. The ladder is an extension ladder that he has placed just below the windowsill. Entering the window, the firefighter locates the victim on the bed he transitioned onto after he “swept and sounded” the area with a tool. He transmits over the radio that he has located the victim and must remove him through the window. The victim is average size, and the firefighter scoops him up and lifts him out the window.

Firefighters should always “sweep and sound” the floor prior to entering a room. You don’t want to bang the floor immediately after venting the window because a victim may be in close proximity to the window. Entering the window is your choice; if you enter with a foot first to control your descent after straddling the sill, that’s great. In this situation, your hand is one of the last things to leave the ladder or window frame, and you’ll know exactly where your emergency exit is if the place lights up. If the window doesn’t permit that and you have to enter headfirst, don’t just dive in like you’re going swimming. Try to control your speed and descent into the room because you don’t want to end up across the room with no recollection of where your egress is. Also, there have been instances where the prefabricated I-beams have burned away and the floors have sagged or collapsed under a firefighter’s weight.

Once you’ve located the victim, you’re going to have to decide what to do next. Every fire will be different, and nobody but you is in the room and knows the conditions inside. Maybe it’s just a child and scooping the kid up and removing him quickly gives him a better shot at surviving. However, if the person is obese, closing the room’s door might be your first thought to buy more time.

When it’s time to lift the unconscious victim up to the window and remove him, you usually lift up from under the shoulders and hoist him out the window. So, the receiving firefighter gets an upper torso and dangling arms coming at him. Removing a smaller child is usually easier, as you lift the whole body and place it across the climbing firefighter’s arms as both his hands are on the back of the ladder’s rails so he doesn’t lose contact with the ladder while descending. This is the preferred method of descent for adults and children so you can control their weight and the speed of descent, and if you need a second to regroup, you simply press the victim into the ladder with your chest and take a breather or reposition a hand under him. If when you remove the victim you split the victim’s legs with your arm, continue to slide your hand down the rails and support the victim.

Climbing down with a rung-to-rung hand motion is difficult and dangerous! It’s going to be very hard to balance the victim’s weight on one arm when you try to locate the next rung down. Even when you’re climbing down behind a conscious victim, use the rails; if something goes wrong, you can pin and control the victim against the ladder.

During the descent, many of us who are footing the ladder (from the front) have been taught to run up the ladder and support the firefighter coming down. If you’ve never done it, it’s important to know that you’re applying enough pressure on his buttocks to support him but not so much that he can’t move his leg off the rung and proceed to the next lower one. Also, it’s okay to talk to him about how far down the next rung is and offer some words of encouragement. Hopefully, the ladder is fly out for a rescue so the victim doesn’t get snagged or need to be lifted over the “sill” that’s created between sections of the ladder when it’s fly in. If the victim does get snagged or the descending firefighter is having a problem at this lip, the backup firefighter may have to assist in lifting or pushing the victim upward.

One factor during this whole process is if you’ll be able to have a backup firefighter on the ladder and someone will run to foot the ladder, but is anyone thinking about immediately bringing another ladder to the rescue operation? It doesn’t matter if it’s another extension ladder or a straight/roof ladder. Get a ladder next to the victim who is most likely to be removed horizontally with his legs dangling off one side of the ladder. Place another ladder at almost any angle; have another firefighter climb it and grab the victim’s legs or pants to take weight and pressure off the firefighter performing the main removal.

The biggest worry is how you’re going to place the ladder into position. You might have to muscle it up there behind the victim, but sometimes if you’re thinking after you receive the radio report, you can place a second ladder next to the first to make the transition and rescue go smoothly. Sure, there are going to be times when a car is in the driveway or wires or trees are in the way, but start to think two from the start.

You put two firefighters on the ladder to remove the victim, and that’s okay, but if you train on this tactic of two ladders in a relatively close position from the start, you’ll find out that it’s easier and quicker to remove an unconscious victim to the ground. Get in on the “two-for-one specials” and make sure you don’t just focus on the one victim in the room; search for any others in there, too. Ladders upward, the more the merrier.

MICHAEL N. CIAMPO is a 34-year veteran of the fire service and a lieutenant in the Fire Department of New York. Previously, he served with the District of Columbia Fire Department. He has a bachelor’s degree in fire science from John Jay College of Criminal Justice in New York City. He is the lead instructor for the FDIC International Truck Essentials H.O.T. program. He wrote the Ladders and Ventilation chapters for Fire Engineering’s Handbook for Firefighter I and II (Fire Engineering, 2009) and the Bread and Butter Portable Ladders DVD and is featured in “Training Minutes” truck company videos on www.FireEngineering.com.