Multiple discussions have taken place recently in the U.S. about the use of smoke curtains. Having different types of buildings, different stages of fire development, and different risk situations in mind, the discussions about this get a bit confused fairly easy. To get a better basis for further discussion about this tactic and tool, a typical real fire scenario should be presented with illustrating pictures. This fire discussed below happened in August 2014 in Göppingen in the south of Germany. The town has about 60,000 inhabitants and a volunteer fire department.

On a Friday evening at about 5 p.m. I got dispatched as regional fire chief to a basement fire in a multi-story residential building. Multiple people have been reported to be trapped in their apartments because smoke already spread into the stairwell. The area is known to the fire service because all the buildings there have been used until about 20 years ago as family housing for the American Armed Forces–the name of the street (John-A.-Holebrook Street) indicates this. The buildings are about 50 years old and were renovated about 20 years ago. They are constructed with brick walls and concrete slabs.

About eight minutes after the emergency call, I arrived together with the first engine on scene. A ladder truck, a command car, and the second engine arrived just a minute later. Altogether there were 24 firefighters on scene. 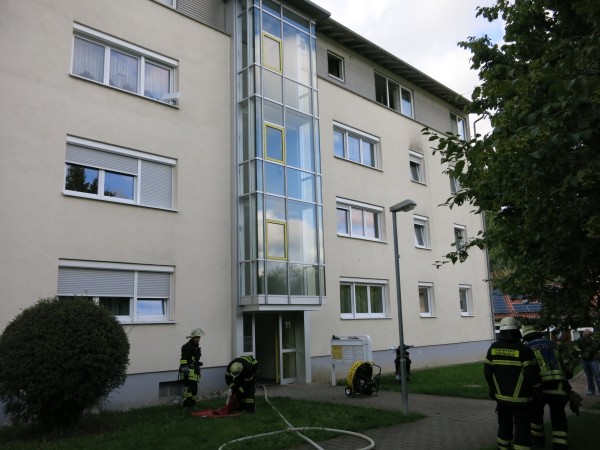 The working basement fire had already released smoke into the stairway and multiple people were in front of the building with some still in their apartments. Some of these people were reported to be limited in their mobility. The picture shows the front view after the fire (side A during at overhaul).

The back side of the building (Side C) is shown in the next three pictures. 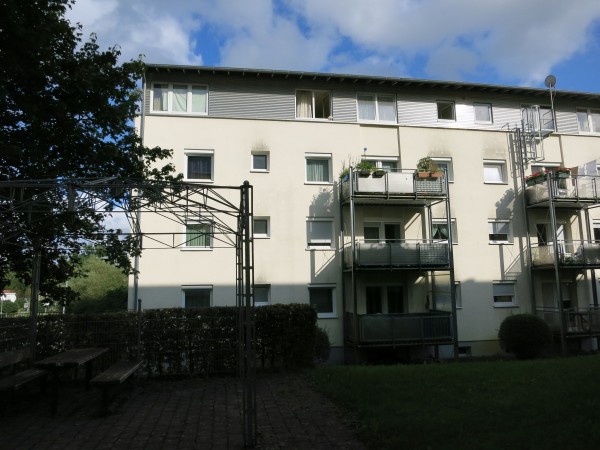 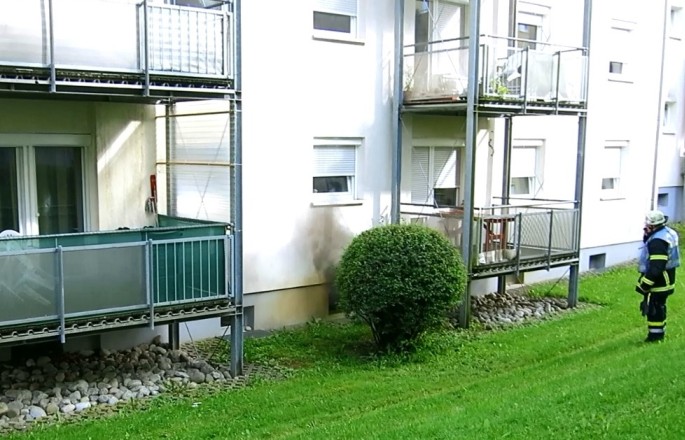 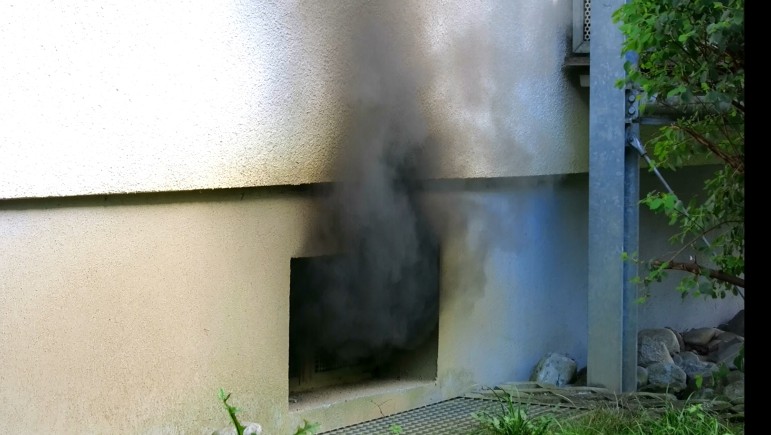 One window in the basement showed smoke coming out in a pulsing pattern, indicating that there was a moderate fire in the basement that was obviously underventilated and that probably some “plastic material” was involved.

Several windows were open in the apartments on Side A and C.

Several people were reported to be still in the building and some of them would have had difficulties leaving the building. To clear the building would have taken several minutes, significant staffing, and would have meant bringing civilians into the more hazardous smoke-filled stairway. We decided keep the people in the building and use defensive ventilation to keep smoke from the basement fire out of the stairwell during operations. Because the windows in the stairwell were open at that time we knew that this mechanical ventilation would not create huge differential pressure. But because we experienced smoke spread through holes (such as those for heating pipes), we also did not want to have too much air pressure in the building.

Basement rooms are known to be between 5 and 100 meters square in size, depending if the separation between the storage area for different apartments is a solid wall or just some simple wood construction.

To limit the amount of smoke flowing from the fire compartment into the stairwell and to limit the amount of fresh air flowing to the seat of the fire and feeding it, the first attack team used a smoke-blocking device when opening the door to the fire compartment. With thousands of reported uses in real building fires, this procedure can certainly be called a standard option for German fire departments.

Installing a smoke-blocking device into the door frame, the first attack team entered the fire compartment with a charged hose to reach the seat of the fire. This is shown in the picture below. In this picture, the amount of smoke that would have flown into the stairwell without a blocking device is obvious. Two smoke blocking devices were used in total to control the air flow in the desired direction. With their aid it was possible to divide the one big problem (a room fire next to the stairwell in a building with multiple occupants) into two smaller problems which were quite easy to handle with the available resources (staffing and equipment). 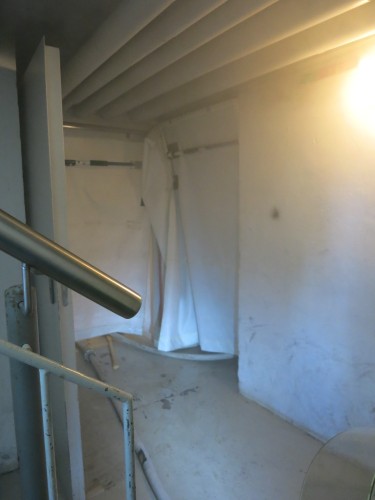 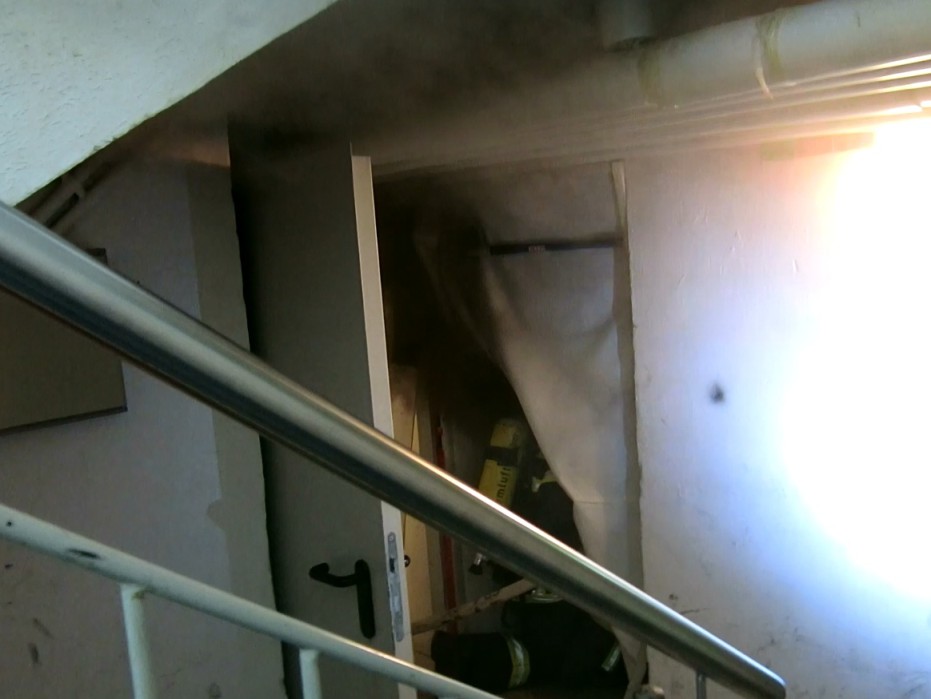 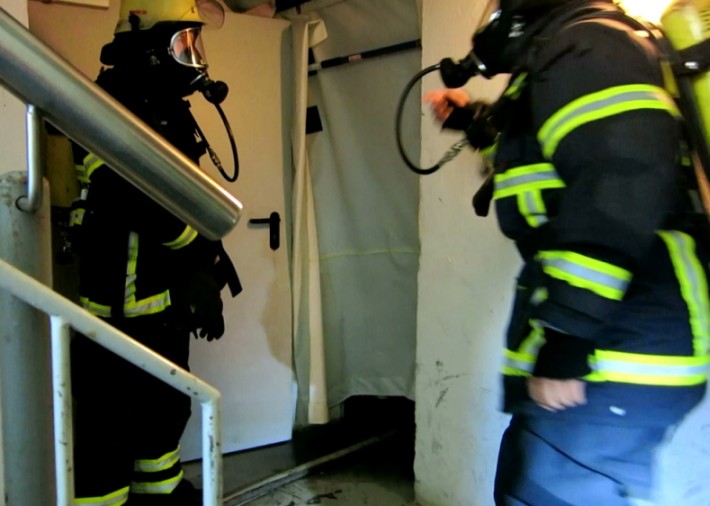 To get in and out of the fire compartment, firefighters just lifted the smoke blocking device.

The damage in the fire compartment can be seen on the last two pictures below. The storage areas of two apartments were severely damaged; quite a lot of plastic and also a few liters of flammable liquids were on fire. About 10 meters square of combustible insulation material at the basement ceiling also contributed to the fire.

The next three pictures illustrate the position of the smoke-blocking device in the door frame. 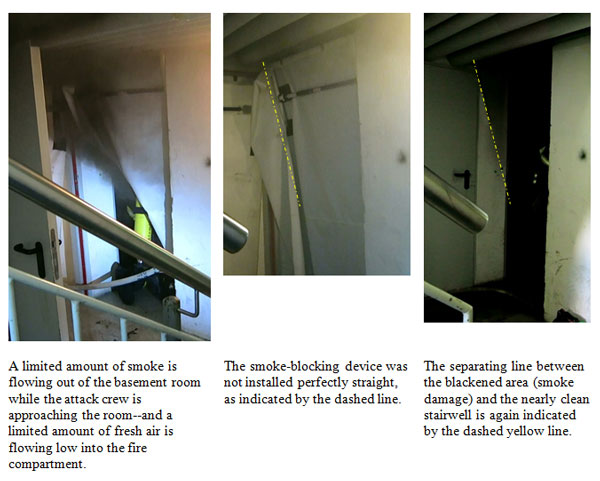 The tactic described in this fire report can be referred as a standard operating procedure in numerous fire departments in Central Europe. There are reports from more than 1,300 real building fires where this tactical principle has been successfully used.

It cannot be claimed that most firefighters in Europe using the smoke-blocking device understand how this interferes with the fire dynamic and the flow turbulence in the fire compartment. But they understand that separating smoke from escape routes and from civilians makes a lot of real fire situations much easier to handle.

We made the following realization in the last 10 years: Things always get better

There are obviously large building fires that require a large amount of water and at which this tactical approach might be in vain–but controlling the air track and smoke flow can also prevent dangerous situations resulting from in wind-influenced or wind-driven fires.

A movie with some sequences from this fire can be watched at: www.smokeblockingdevice.com/140815_fire_gp.mp4

Dr. Michael Reick has served in the fire service for 26 years and works as a professional regional fire chief in Germany. He published multiple articles, trains firefighters, lectures at the state fire school and works as associate professor for fire safety at a University of Applied Sciences.