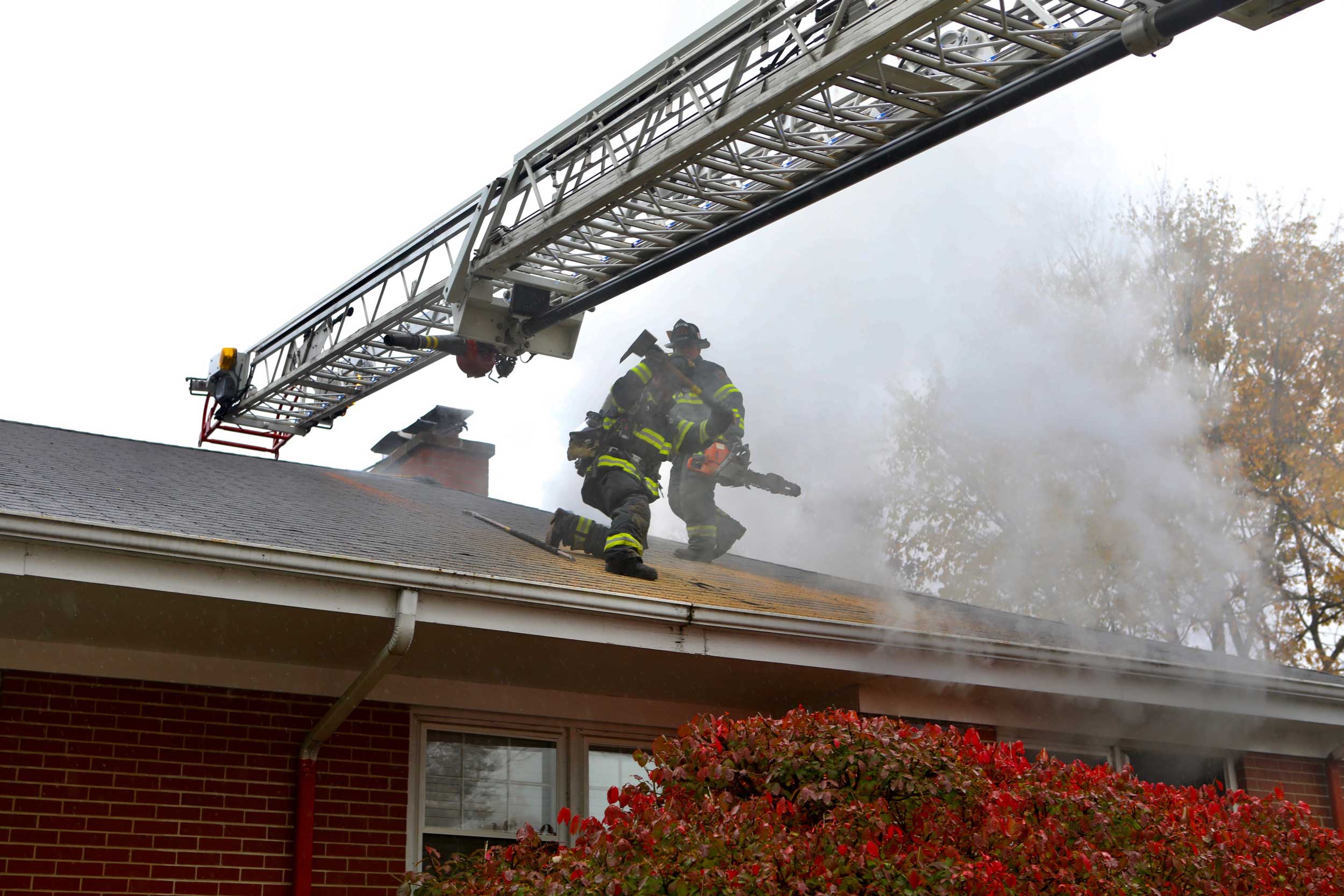 Fighting fire in a one-story, row-type house of ordinary construction is a typical operation for many fire departments throughout the country and the world. For the Evanston (IL) Fire Department, this is a typical operation: line through the front door and roof ventilation. The building is of ordinary construction with a brick exterior with 2 × 10 roof joists and tongue-and-groove sheathing over it. This is a bread-and-butter operation most of the time.

At this fire, units pulled up to fire showing on the A side. Fire was extending to the attic space through the walls. Companies went to work, as most of us would, pulling the first hoseline to the front door. Forcible entry commenced on the front door; the line was discharged; and, because the fire was extending up the walls and into the soffits, roof ventilation was going to be performed.

Most times, with knowledge of the buildings in your response district, you can anticipate the type of construction you are going to encounter. Looking at the buildings in most of neighborhoods, you can tell buildings like this with the brick exterior and one story were most likely built in the late 1940s into the early 1960s. You would expect dimensional lumber and a typical one-story unit layout, depending on the building. Some of the corner units like this building might have bigger units with more bedrooms, meaning there are more areas to search. Again, building and district knowledge are key to a smoother operation. 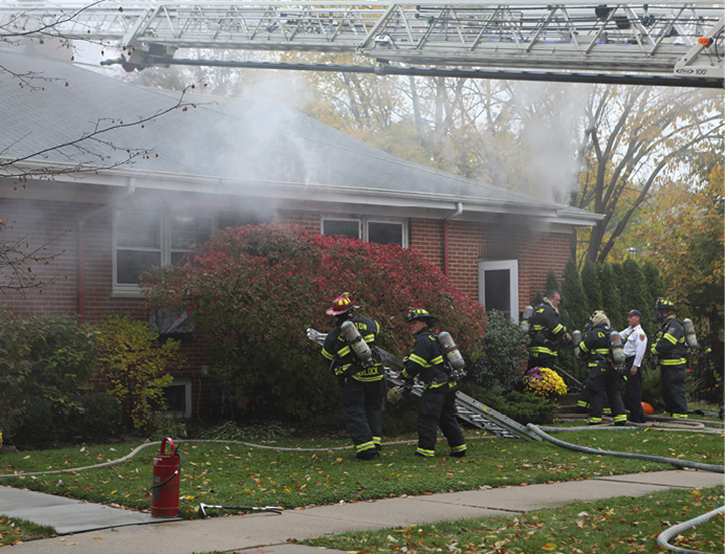 (1) Firefighters raise a portable ladder to the roof to begin roof ventilation as the engine prepares to advance a second line in the front door of the building. (Photos by Tim Olk.) 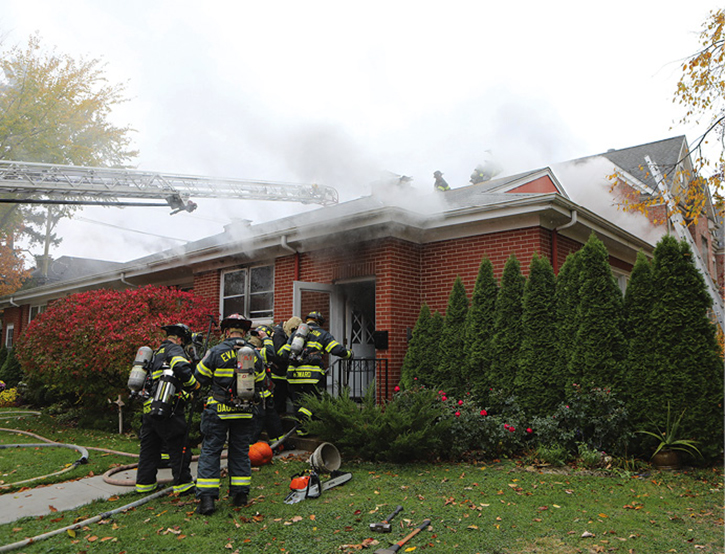 Making a fire attack down an open, unenclosed staircase requires coordination and a backup line. The members making this fire attack have to all be on the same page and get down those basement stairs quickly. The backup line has to be at the top of the stairs to prevent the fire from rolling over their heads and coming up the stairs and also as a safety line for those members in the basement. 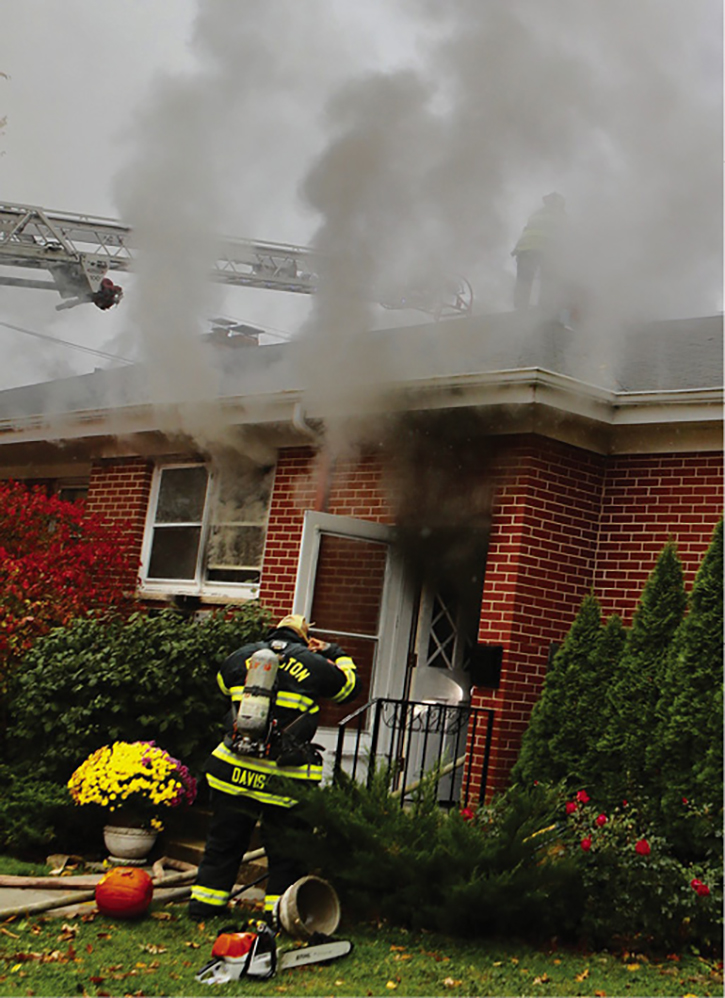 (3) Firefighters have entered the building to begin fire attack. Search crews are also in the building doing a primary search. Note the heavy smoke at the front windows. Members on the roof start to cut the roof. 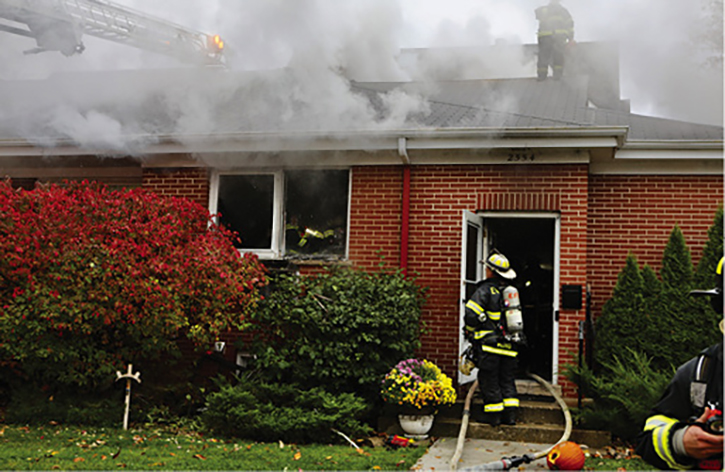 (4) The chief stands out front observing conditions. You can also see under the windows where the main body of fire was; the basement window that was showing fire was hidden by the bushes. The importance of doing a 360° walk-around and looking both up and down cannot be overemphasized. 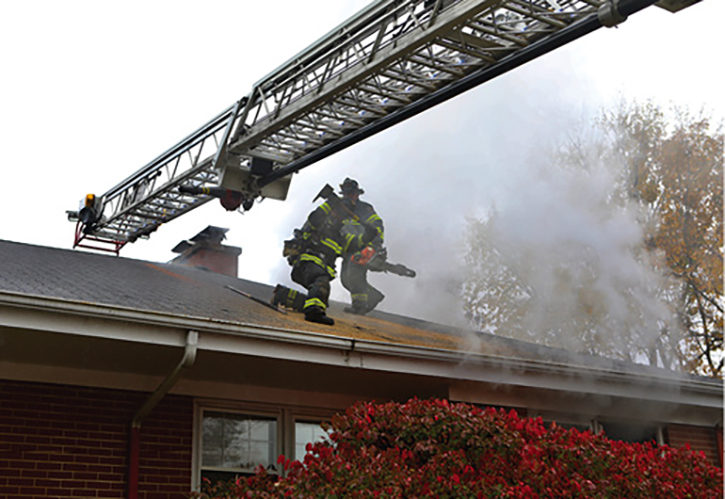 (5) The firefighter on the roof with the saw is giving way to a member who is going to open up the hole using hand tools. 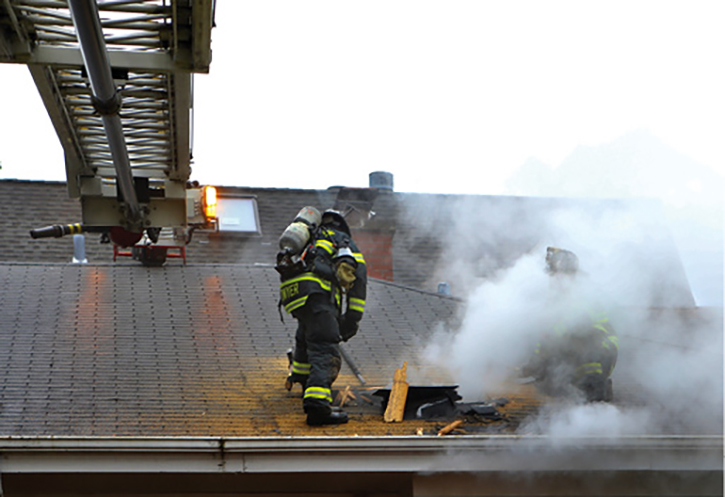 (6) The firefighters on the roof are working on enlarging their hole and checking conditions in the attic space. The skylight is on the exposure C building’s roof, not the fire building.

Normally, units might consider attacking the basement fire from the exterior but, in this case, with no door at the top of the stairs, you’d be pushing the steam and the heat back up the stairs. Therefore, in this situation, coordination and control of the situation are incumbent on the incident commander (IC). The members made their move down the stairs and extinguished the fire quickly. The roof was opened successfully, the attic was vented, and the fire was extinguished.

Firefighters should always expect the unexpected. In this type of building, if you get inside for a medical run or a nonfire emergency such as a carbon monoxide or smoke detector, water leak, or any other call for assistance and you find an open stairway, note it in your dispatch material. Hopefully, an address-based computer information dispatch system allows you to put that information in this building’s profile.

The need for three handlines at this small building in some ways seems like overkill, but you need one to control the first floor, one to go down to the basement, and the ever-important backup hoseline.

The keys to this fire going out safely and quickly were the communication from the first-in units about the open basement stairs and the IC understanding this and getting the resources and handlines into place to deal with this. Proper communication and coordination of resources again proved that once you gather and share information, you can act accordingly and put the fire out.

MICHAEL M. DUGAN, a 42-year veteran of the fire service, is also a 27-year member of the Fire Department of New York (FDNY), where he retired as the captain of Ladder Company 123. As a lieutenant, he served in Ladder Company 42 in the South Bronx and was a firefighter on Ladder 43. He is a member of the FDIC International and Fire Engineering advisory boards. He is the recipient of the 2020 Tom Brennan Lifetime Achievement Award.