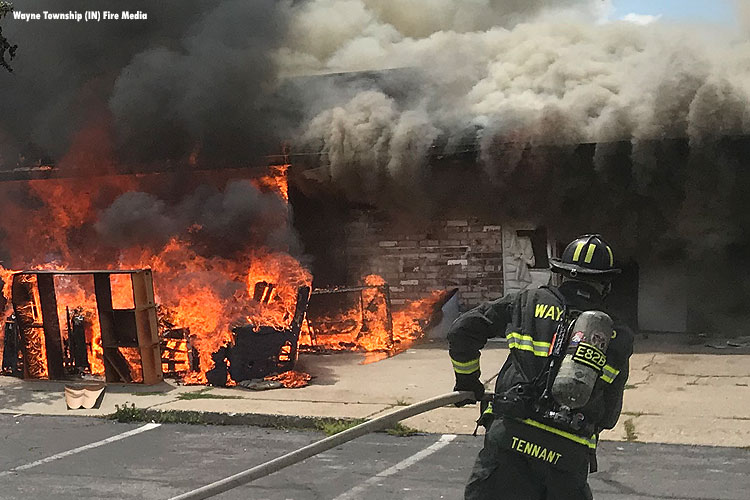 Fire officers operating at the scene of a building fire have many concerns as they lead fire companies in either an aggressive interior fire attack or in taking a defensive posture. The fireground is a dynamic place, with multiple operations that are interdependent on each other taking place simultaneously. Despite the demands on every fire officer, there are two main concerns that are always present–keeping members of the fire company safe and ensuring that the incident commander (IC) informed of the progress of the company and of any changing conditions where they are operating.

The IC depends on the company officers’ reports to determine if the overall goals of the incident action plan are being met. ICs expect to receive routine reports at regular intervals as fire companies operate on the fireground. Some of the routine reporting should include progress reports, hydrant/fire department connection reports, salvage reports, where fire companies are operating, primary/secondary search reports, heat/visibility reports, self-contained breathing apparatus (SCBA) status reports, or a change in operational area. Some additional routine communications can include requests for rehab, requests for additional fire companies, requests for specific tools/equipment, requests for a change in hose pressure, or requesting a folding ladder.

RELATED: Communications Broke Down: An Excuse for a Serious Problem | Handling the Mayday: The Fire Dispatcher’s Crucial Role | Throw Back to Basics: Fireground Communications

When normal or routine fireground operations turn into something that could be catastrophic (or has already turned into something catastrophic), fire officers must transmit an URGENT radio message to the IC. These types of situations are usually discovered suddenly and are recognized by the fire officer as something that needs to be acted upon immediately. Many fire department standard operating procedures (SOPs) relating to radio communications have a section that provides direction for fire officers who find themselves in this situation. These fire officers need to make a radio transmission immediately, they need to have clear air, and they need to know their message reaches the IC immediately. In today’s fire service, almost every firefighter on the fireground has a portable radio, so when a fire officer notifies the IC of a dangerous situation, the fire officer is by extension notifying every firefighter operating on the fireground of the dangerous situation at the same time. This represents a profound improvement in situational awareness and has improved fireground safety dramatically. So what type of radio communications are we talking about? We all know what a Mayday radio transmission is and how it changes the fireground operations. A Mayday will be transmitted when there is a firefighter down, firefighter disoriented, sudden collapse, or some life-threatening situation that warrants immediate attention. We prepare for the Mayday radio transmission by training, developing SOPs and establishing rapid intervention teams at every fire. However, there are many other conditions on the fireground that warrant an urgent radio transmission that do not present such immediate threats to the lives of firefighters. Listed below are some dangerous conditions that warrant an “urgent” radio transmission to the IC.

Buildings are under tremendous stress during structure fires. The building and its support system are under attack from an unrelenting fire. As firefighters enter a burning building, they bring with them heavy equipment, their weight (including their personal protective equipment), and they begin to flow water from multiple hose lines. Suddenly this burning building is subjected to stresses that the architects or building engineers never planned for. As the support structure for the building is being burned away, the firefighters are flowing water from nozzles at a minimum of one hundred gallons per minute, weighing 8.35 lbs. per gallon! One flowing nozzle will add 835 pounds to the building every minute! When fire officers hear unusual sounds emanating from the building, this is a clear indication that the building is shifting and will soon collapse. Fire officers need to make an urgen radio transmission to the IC reporting this situation. Evacuation of the building is necessary and a defensive posture should be assumed.

Gaps Where the Floor Meets the Wall.

All good fire officers are constantly measuring the progress of their operations and observing the environment around them. Fire officers should continually glance down at the point where the wall and floor meet. This area may be obscured by carpet or heating appliances, but an officer can use hand tools and a flashlight to get a close look at this area. The fire officer should be looking for the presence of a gap where the wall and floor meet. There should never be a gap visible at this point, and if a gap is found it is an indication that the floor may be pulling away from its attachment points and the wall is bulging out. This condition indicates that a total or partial collapse is likely. This clearly warrants an urgent radio transmission to the IC and a close inspection of the area should be undertaken immediately, if not a complete building evacuation.

This is a common condition that is not limited to urban fire companies. It is a very common occurrence for firefighters to discover stairwells obstructed with various things: bicycles, stored window air-conditioners, furniture, toys, golf clubs, appliances, stored clothing, auto parts, gasoline cans (usually with gasoline in them), old mattresses, snow shovels and many other household materials.  This condition can be found in stairwells that lead to upper floors as well as stairs that lead to basement areas. This may seem like simply an annoyance for the fire company that is attempting to use a stairwell to reach the basement or upper floor, but the presence of an obstructed stairwell may prevent or slow down a fire company to the point that they are unable to complete their assignment. A well-coordinated fire attack depends on every fire company accomplishing their assignment. When there is a delay, or if the fire company is unable to complete their assignment, it will affect the whole incident action plan. Obstructed stairwells become an even more dangerous situation when the stairwell is filled with smoke and heat. Firefighters operating in this environment can’t see the obstruction until they are upon it or trapped by it. Entrapment in a heated smoke-filled stairwell is a real life-threatening situation and would warrant a Mayday transmission. Fire officers need to transmit an urgent message when an obstructed stairwell condition presents itself to maintain situational awareness for every fire company operating at this building fire.

Floors That are not Level and Doors that Will not Close

Floors that are not level or interior doors that will not close indicate that the building is under tremendous stress and a building collapse is likely. This is a dangerous sign that should be identified as quickly as possible. When firefighters flow water into a fire building and the run off water is flowing to one side of the room and collecting there, or when the interior doors will not close within their frames, these are indicators that the building is beginning to shift and a building collapse is likely. These conditions are usually accompanied by visible cracks in the walls. Officers must transmit an urgent message to the IC describing this condition and expect an early evacuation from the building.

If a fire officer discovers signs of arson, an immediate urgent radio transmission should be made to the IC. Arsonists generally want to keep firefighters out of the buildings that they start fires in to aid in rapid fire spread. Arsonists will usually make it easy for fire to spread quickly and difficult for firefighters to maneuver inside a building. This is a very dangerous combination for firefighters as they enter a building that is prepped to burn. Some of the more common situations that indicate a possible arson fire include holes in the walls, floors, or ceilings, especially in balloon frame buildings; kitchen appliances moved to unusual places, such as at the top of a stairwell; missing stair treads or cut-away bannisters; rapid fire extension; smell of accelerants or open gas valves; multiple fires in a building; and tampering with fire protection equipment or open windows in the dead of winter. All these signs can indicate a dangerous situation for firefighters that deserves extreme caution for all members operating on the fireground. It must be remembered that the arsonist wants to burn the building down and to accomplish that the arsonist must keep the firefighters out of the building.

Rapid fire extension within a building many times leads to fire extension to neighboring buildings. When a fire officer notices the possibility of this type of fire extension to exposure buildings, an urgent radio transmission is immediately necessary. The incident is rapidly expanding and will soon be beyond the capabilities of the first-alarm assignment. Additional alarms will be necessary, and even with a normal response time of the second alarm companies, the possibility of multiple buildings becoming involved is great. This is especially common in residential areas, where the majority of buildings have vinyl siding. Once the radiant heat hits a neighboring building covered with vinyl siding, it will begin to lose its shape and start to burn.

Hoarding is a condition that can be found in any city in any part of the country. Hoarding is a psychological compulsive disorder where a person collects and stores large quantities of materials inside their home. These materials are stored in every room of the house and make passage through the house difficult, if not impossible. When a hoarding situation is identified, an urgent radio transmission to the IC is required to warn all firefighters of the danger of entrapment, difficulty in moving a hoseline, difficulty in completing a primary search, and unusual fire behavior.

When a fire officer arrives on the scene of a building fire and is confronted with a fire in a masonry building with bricks scattered on the street in front of the structure, extreme caution is warranted. Bricks lying in the street usually indicate that the fire is well advanced in the building. Other clues to look for are bulging walls, large cracks visible on the exterior walls, smoke emanating from between the bricks, and masonry dust clouds visible on the exterior walls. When a fire officer finds any of these conditions, an urgent radio transmission to the IC is necessary. This building could stay intact, but what is equally likely is that a building collapse is probable. The IC will likely establish a collapse zone when this radio transmission is received.

These are just a sampling of fireground conditions that fire officers may encounter which require caution and communication with the IC. Officers should always be on the lookout for dangerous conditions as they operate inside burning buildings even when the fire operations are in the overhaul stage. The danger is ever present.

Situational Awareness on the Fireground

The Firefighter: A Different Kind of Person

Command Presence: What Is It, and How Do You Develop It?

Standard Operating Procedures: The First Step to a Safer Fireground