We have all had that call that comes just as you sit down for dinner, the call that has come in at the same time every day for the past week. But, what happens when that assumed nuisance call is an emergency? Have you and your crew become complacent? Are you battle ready and planning your strategy? The Cranford (NJ) Fire Department (CFD) was faced with this situation in December 2019. The dispatch was for a possible fire in a single-family home. This address had quite a built-up file over the past years because of numerous recreational fire issues and careless burning calls. This call, however, was different from all the others: It stretched a small department to its limits and forced the firefighters to work in the most efficient way possible.

Crews were dispatched at 1812 hours for the report of an active fire. The initial response was Engine 2 (four personnel), Truck 1 (three personnel), and all available volunteers. On arrival, Engine 2 identified a working structure fire in a 2½-story home and passed command to the battalion chief responding in the truck.

“Nothing Showing” Does Not Always Mean No Fire Inside

(1) Engine 2 is positioned two houses away with a positive water supply of one five-inch and one three-inch supply line. Its driver’s side wheels are up on the sidewalk and the apparatus is partially “beached” to allow additional apparatus access to the front of the fire building. (Photo by Brad Bisset.)

Command began to perform a 360° size-up of the single-family, split-level home with an attached two-car garage. The size-up revealed the entire exterior of the C side of the structure was on fire. Fire had also made its way into the structure, and heavy black smoke was coming from the soffits on side A. A second alarm requesting an additional two engines and one truck was immediately transmitted. Crews noticed two cars in the driveway, but they were advised that the residents were not home. Neighbors reported that two dogs were inside the home. While the size-up was being performed, a propane grill at the B/C corner of the structure became involved. Propane released from the pressurized tank through the vent ignited.

At this time, a neighbor, who was attempting to call the dogs to the door, opened the front door. Conditions at the front door had thick black smoke down to about a foot off the floor. The engine crew in full personal protective equipment (PPE) with self-contained breathing apparatus (SCBA) stretched the initial charged line and made entry into the home (photo 2). The engine company advanced approximately five to 10 feet into the home and was met with the main body of fire.

The attack line hit all visible fire and began actively cooling the atmosphere. Heavy fire was advancing up the stairs in a blowtorch manner. At this point, the engine company took a firm position to prevent further fire advancement up the stairway. While the nozzleman held the fire at the stairs, the two other members quickly preformed an oriented search off the attack line. Division 1 search was negative. Division 2 search located one of the missing dogs and also heavy fire from the exterior that made its way to the interior. The crew exited the home with the dog, which necessitated cardiopulmonary resuscitation.

Exterior line. Members of the truck company set up the 100-foot ladder truck, setting up outriggers and positioning the ladder under communication lines to the roof of the structure (photo 3). After the incident commander completed a 360° walk-around, he ordered the two members to stretch a line off the engine for exposure protection at the B/C corner. A 200-foot 1¾-inch line was stretched, and two members began to knock down the exterior fire, preventing it from advancing into the soffit and attic space. Crews also cooled the propane tank to prevent any boiling-liquid, expanding-vapor explosion from occurring. Crews, knowing that they had firefighters operating inside the structure, made sure not to direct any streams into any openings of the C side. Once the bulk of the fire was knocked down on the exterior of the C side, one of the members went back to the engine and stretched an additional 200-foot 1¾-inch line to the front door. The member then went back to the engine and stretched a fourth line—a 300-foot 1¾-inch line to the rear of the structure as a backup line. 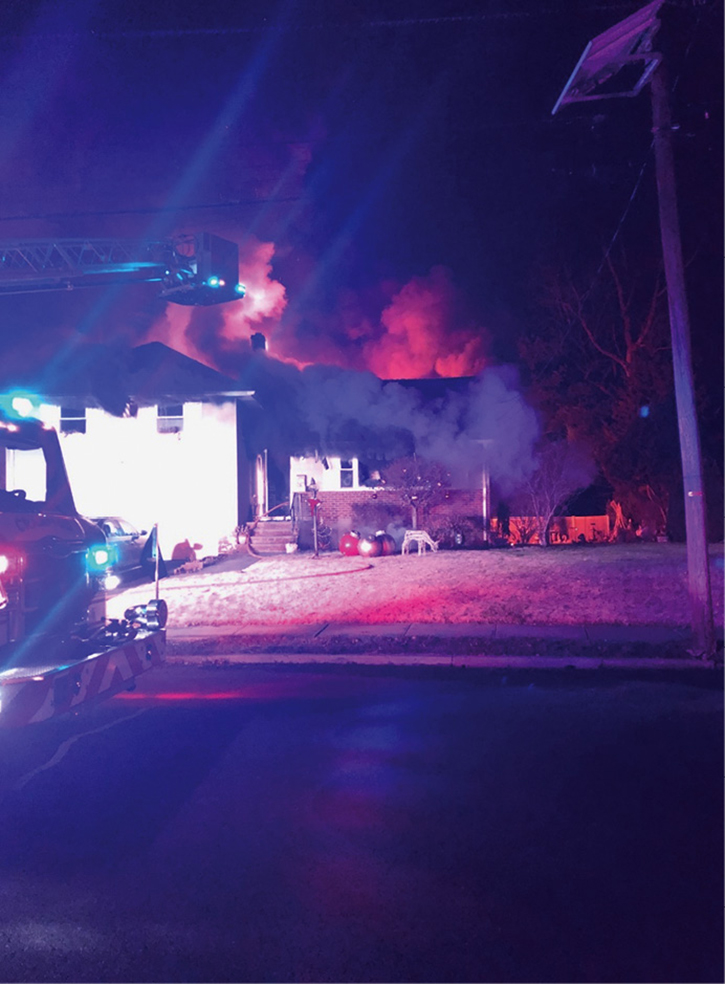 (3) An overview of the fireground operation, including the placement of the ladder truck with the body directly under the communication wires. Positioning the ladder truck in this manner sometimes takes the hazard of the overhead wires out of the equation. Truck operators must always exercise caution around overhead obstructions. (Photo by Brad Bisset.)

Additional resources. At this time, approximately 10 to 15 minutes into the incident, additional companies began to arrive. The first mutual-aid engine company to arrive was assigned as the rapid intervention team (RIT). This company performed a 360° size-up and began softening up the building by putting ground ladders up to windows and making sure there were additional exit points for interior crews.

The second mutual-aid engine to arrive was assigned to take over the initial attack line. This mutual-aid company was making progress on the fire when one of the members found the second dog. The crew then exited the structure with the dog, and additional CFD personnel replaced them on the attack line. An additional CFD engine arrived and was ordered to take the backup line at the front door to Division 2 and knock down any remaining fire.

The mutual-aid ladder company arrived and was assigned vertical ventilation. Crews gained access to the roof through ground ladders and cut two holes in the roof for ventilation (photo 4). Additional CFD volunteers arrived and assisted with the advancement of a three-inch hose to the front of the structure with a gated wye to a 1¾-inch hose as a backup line.

The fire was placed under control approximately one hour after the initial dispatch. In total, five lines were stretched; four operated during the incident. Fifty feet of five-inch supply hose was used to establish a positive water supply. The Union County Fire Investigation Team was called to the scene (photo 5). At the end of the incident, there were no injuries or loss of human life.

The CFD performed a postincident review of the incident, discussing tactics, personnel, and firefighting techniques. The review revealed that crews were faced with a major issue on arrival: an exterior fire that began to spread to the interior of the structure. The review concluded that it was imperative that two simultaneous lines be stretched, one to attack the exterior fire and one to fight the interior fire. If an exterior line was not stretched, the fire would have advanced to the attic and burned the roof off the building. If an interior line was not stretched, the fire advancing in the structure would have caused a structural collapse and the structure would have been lost. While the two lines were being deployed, communication between the two crews and command was imperative. Both crews knew where the other was operating, preventing conflicting flow paths. 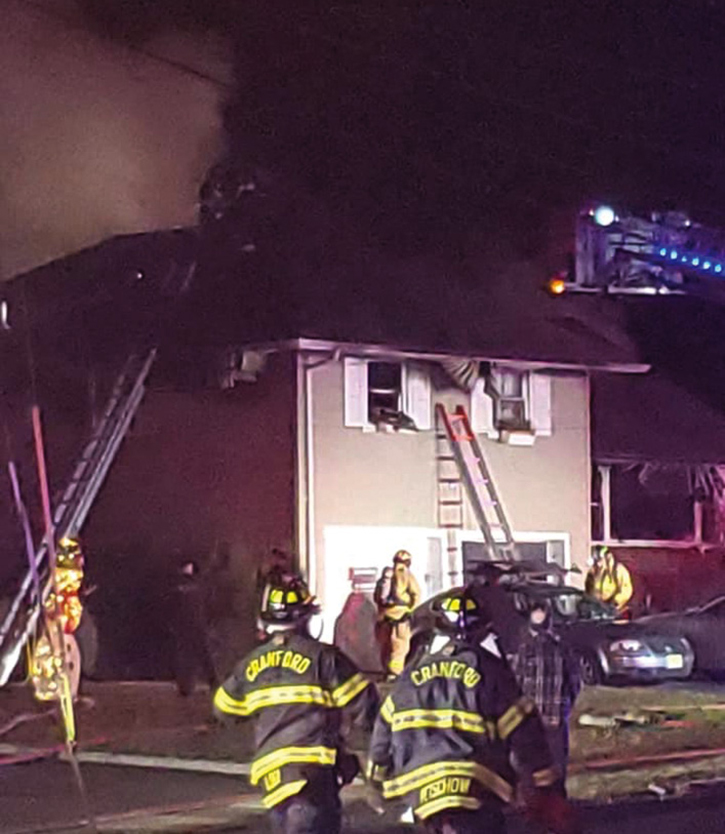 (4) Truck companies used ground ladders to access the roof for vertical ventilation. Additional ladders were used to vent windows on Division 2. Later in the operation, these ladders were repositioned as egress points for crews still operating inside. (Photo by Ed Bagniewski.) 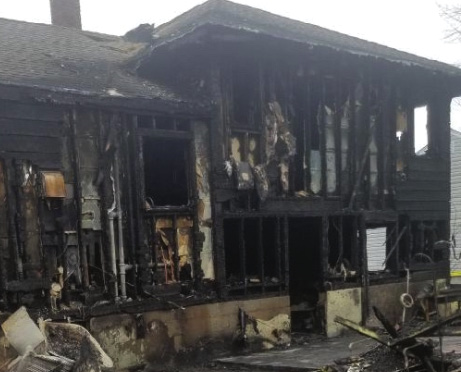 (5) The fire caused the collapse of a three-season room (bottom, right) along with heavy charring up to ½-inch thick. Additionally, the intensity of the fire can be seen as it burned through multiple 1 × 6 planks of sheathing, exposing interior gypsum board and plumbing. (Photo by author.)

An extraordinary fact learned in the review concerned the knowledge of the crew. Of the seven firefighters on duty on December 26, four had attended FDIC International within the past two years. When interviewed, each member said that specific actions they took were based on information they learned at FDIC International. When interviewing the officers on duty that day, both said that they learned valuable lessons at FDIC International on personnel management and how to use their limited personnel to accomplish multiple tasks on the fireground.

Too often in today’s world, volunteer and career departments find they are faced with limited personnel during incidents. Fire departments all over the world are attempting to solve the problem of how to make their firefighters more efficient. Firefighters and officers must continue to work on the basics of training and also on incorporating a multifaceted approach into training when appropriate. Engine company members must be comfortable with performing oriented searches off an attack line. Engine operators must be comfortable with not only pulling and charging lines but also throwing ladders and prepping equipment for incoming units. Truck company members must be familiar with and confident pulling second and third lines when needed.

Modern-day firefighters, especially in smaller departments, must work on becoming the best multifaceted and efficient firefighters to date. Too many jurisdictions are not fortunate enough to have a two-and-one response to every fire. Firefighters in these areas must not limit themselves to being only a “pipe man” or a “truckie”; they must strive to be a jack-of-all-trades.

Fires are never planned and, more often than not, crews are responding to medical calls, routine emergencies, and fire alarm activations. Crews will never know when the next major fire will occur. The CFD was dispatched to an address to which they had responded dozens of times, but the crews were always advised to be battle ready no matter what the dispatch or the address.

Crews must always be steadfast while on duty and must always strive to improve themselves, their department, and their community. It is essential that buildings be preplanned and crews know their response areas. Conduct crew training regularly with a realistic approach from lessons learned. Firefighters must always be striving to get to the next level and out of their comfort zone, whether it is writing their first article to let others know about their experience or attending FDIC International to learn as much as they can from their peers. Always keep that passion, and keep getting better.

MARK BAGNIEWSKI is a lieutenant with the Cranford (NJ) Fire Department. He has a bachelor’s degree in civil engineering from Stevens Institute of Technology and is a licensed fire protection engineer. He is a Level 1 instructor at the Bergenfield Fire Training Center.