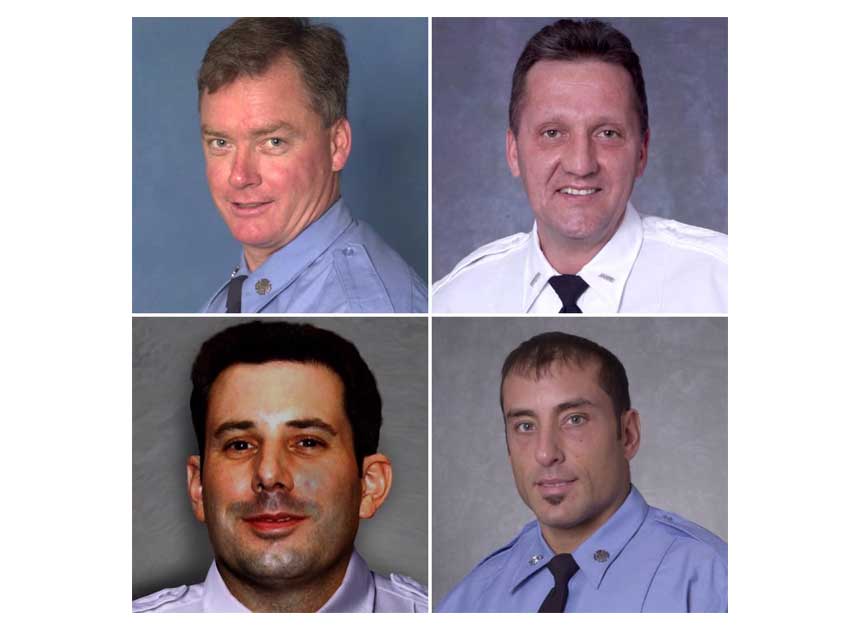 “Black Sunday” refers to a dark day in the history of the Fire Department of New York (FDNY): January 23, 2005, in which the department lost multiple firefighters in two separate fire incidents.

In the Bronx, six firefighters were battling a three-alarm fire in a four-story apartment building that was dated to the 1920s. While searching the fourth floor, the floor above the fire, for occupants who were believed to be trapped, the fire and heat rapidly intensified. The trapped firefighters were forced to jump from the fourth floor window to the ground below.  All sustained critical, life-threatening injuries. FDNY Lieutenant Curtis Meyran of Battalion 26 and Lieutenant John Bellew of Ladder 27 died that day from their injuries. Lieutenant Joseph DiBernardo of Rescue 3, an FDIC instructor, underwent multiple surgical procedures before his death on November 22, 2011. Among the NIOSH report recommendations were training on operating on the floor above the fire and that departments provide their firefighters with equipment such as escape ropes and bailout training.

Per NIOSH, the apartments involved in the incident had been renovated into single-room occupancies (SROs). The original apartments were partitioned into five separate bedrooms with a communal kitchen and bathroom. Each SRO had a single entrance and at the time of the incident each bedroom door was padlocked by the occupants for security. A new partition wall constructed with wood framing and covered with sheet rock limited access to the rear fire escape. The SRO renovation was considered a violation of local building codes as the structure did not have automatic fire sprinklers and no permits were issued for this construction.

At 1337 hours in Brooklyn, Firefighter Richard T. Sclafani, 37, died while responding to a basement fire in a two-story private dwelling. Firefighter Sclafani and members of Ladder 103 were among the first firefighters on scene; Firefighter Sclafani was a part of the company’s inside team, assigned to perform a search of the basement using the interior stairs. Members immediately began searching both for the location of the fire and any trapped occupants. During the search, fire conditions changed rapidly and Firefighter Sclafani became separated from his company. He was found minutes later unconscious and in respiratory arrest on the cellar staircase. Per NIOSH, firefighters spent the next 20 minutes working to remove him from the fire building. Firefighter Sclafani suffered third- degree burns to 63 percent of his body, and his blood carbon-monoxide level was 24 percent. His cause of death was listed as smoke inhalation and burns, and he subsequently succumbed to his injuries. Per the U.S. Fire Administration, this fire was caused when combustibles were placed in close proximity to an electric heater. Fire instructor Chris Naum writes that this marked the first day since 1918 that men had died in two separate incidents in New York City.

Never Forget Them or Their Lessons

Search and Rescue Above the Fire

Above the Fire Floor: Hazards and Precautions