Various forms of marijuana hash have been in use since Egyptian times. In the 1960s, it is believed that major hashish production and distribution started in Morocco. A new method of extracting tetrahydrocannabinol (THC) from marijuana has caught on like wildfire in the last few years, butane hash oil (BHO) or butane honey oil (BHO). This is a method where flammable butane gas dissolves the THC resin and concentrates it when the butane boils off. That’s the problem with this dangerous method–the flammable butane vapors accumulate low to the ground and can find ignition sources, causing an explosion, some of which have severely burned BHO lab operators. This also often results in major damage to the dwellings where this BHO lab was in operation. Often, innocent people are involved in these incidents as the fire spreads.

This type of lab is a serious hazard for first responders as the gas has no odor and can only be detected by a combustible gas instrument (CGI). We conducted a scientific evaluation involving some of these explosions and tried to determine if they create serious pressure (psi) waves with acceleration (G-force) like a conventional explosive. Also, the temperatures were analyzed when a varying amount of butane gas was ignited, typically 1-20 cans. One of the most important aspects of the study was to take a look at ignition sources that can ignite the butane. The explosions in this study do not generate PSI and G-Force like conventional explosions. The temperatures generated in the explosions are >500F depending on the dispersal method. Successful ignition sources included static electricity, Taser, electric arcs and open flames. Other ignitions sources that did not ignite the butane were hot plates, vacuum pumps, a refrigerator, shotgun and a cigarette.

Honey oil, shatter, and wax are common terms for the relatively new method of extracting the TCH (tetrahydrocannabinol) from marijuana stems, leaves, and buds using butane. Hashish has been around for a long time, but the production does not require the volatile chemical butane to extract the small hair like trichomes that contain the THC from the plant. The BHO method uses butane to break off and dissolve the trichomes into the solvent and carry it away from the plant material. The butane is dispensed as a liquid, but quickly turns into a heavier-than-air gas that accumulates in low-lying areas. This condition creates a highly flammable dangerous environment. Butane is an extremely flammable material and is typically found in cigarette lighters. The BHO method allegedly provides for a greater yield than other methods and has become very popular. Although this method has taken off like methamphetamine in the 1980s, the frequency of ignition of butane in these labs has also increased. The explosions are becoming common in metropolitan areas or in states where marijuana is now legal. This study was conducted to bring awareness to the public and first responders on the dangers of responding to these BHO labs.

The location chosen for this study is a retired Navy Training Center, now called the San Diego (CA) Regional Public Safety Training Center. This study is comprised of three phases that are discussed in detail below. The overall goals of this study are to bring awareness to the public and first responders.

For Phase 1 and 2, we used an old navy fire simulator. Inside the simulator are rooms lined with concrete along the walls and ceiling. Also, half-inch steel plates line the walls over the concrete. The floor is metal grating that had to be covered by half-inch plywood. All seams were sealed with aluminum tape. The room is 10x10x12 feet high. We constructed a door from 2×4 wood and plastic wrap so one could see inside the room when the ignition occurred. The door was wrapped two times with the plastic to create a more resistance and a life like explosion.

To disseminate the butane safely, it had to be controlled remotely. There were two dissemination devices built to meet this goal. The first one was constructed out of metal pipes that were strapped together and had a sharp object at the base to puncture the cans (Butanator 1). This released the butane quickly, but in liquid form, that pooled on an automotive drip pan below the Butanator 1 and did not boil off as expected due to auto refrigeration of the cold butane when dispensed. 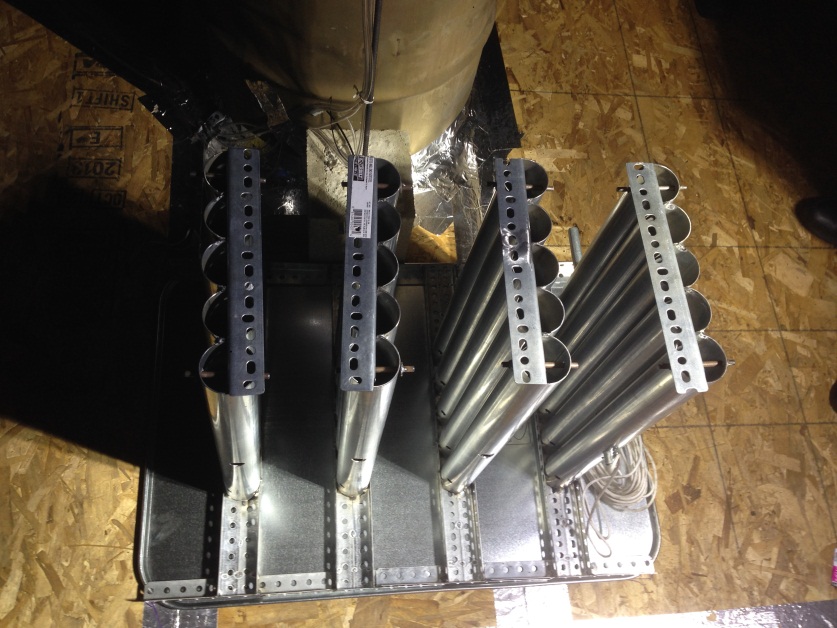 The second device was created after phase one to aerosolize the butane effectively (Butanator 2). Both devices were remotely controlled to release the butane gas safely. This one was made out of wood so it was covered with fire gel to protect it from the heat of the ignition. 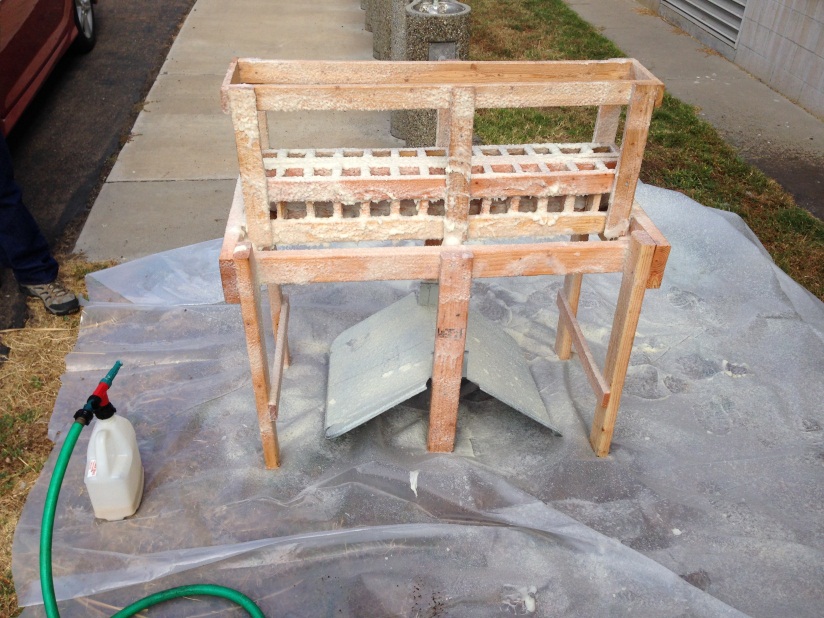 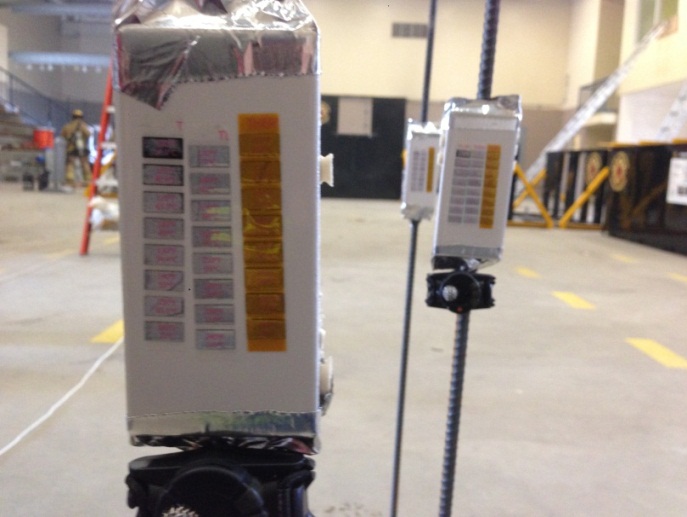 Picture 3. Temperature labels on ceramic tiles. The red circle indicates a temperature of 100F as the 100F block is now a dark color.

According to the University of California San Diego Burn Ward, a severe injury would be, at minimum, a deep second-degree burn and possibly a third-degree burn in a young child or someone older than 65. In most cases, temperatures over 160°F with a one-second exposure would cause a severe burn. 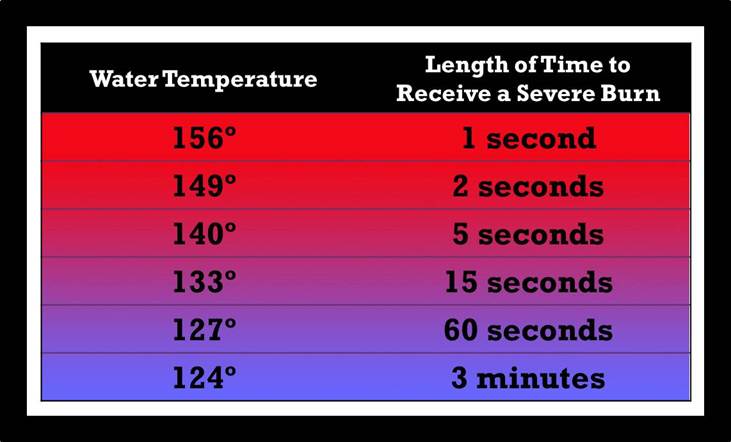 In addition to temperature sensors, we also wanted to find out if there is any significant blast pressure generated, as in a conventional explosive. We obtained blast gauges from BlackBox Biometrics, which provides blast gauges for the military to wear on their clothing and helmets. The gauges measure pressure in psi and acceleration in G-force. These gauges were placed in the same locations as the temperature labels, outside of the room. In one instance we did use one inside but it melted when the gas was ignited. However, we were still able to recover the data!

To measure the butane gas in the room, we plumbed in combustible gas indicators with tubing that were placed near the center of the room and located at one, three, and five feet high. The Eagle 2 (four-gas instrument) from RKI was used for this task. All Eagle 2 instruments were set to data log for all tests. The Eagle 2 was calibrated to Hexane and a correction factor (CF) of .64 was calculated for the Power 5x brand butane that we used. We also used the MSA Safe Sites with a combustible gas sensor (four-gas instrument) as a safety measure. The MSA Safe Site units surrounded the room where that gas was expelled, to monitor for migrating gas that could be a safety hazard. We could remotely read the MSA Safe Site instruments inside and outside the burn room. Safety issues included potential escaping gas or gas that did not ignite that needed to be ventilated to the outside. We could not effectively use a photo ionization detector (PID) due to the high ionization potential (IP) of the isobutane and propane. The IP of the lamp in our PID is 10.6 eV. The IP of propane and butane is greater than 10.6 eV.

The butane that was used for this study is the Power 5X brand. This brand seems to be very popular among the BHO lab operators because it has been refined five times (5x). The ingredients are not pure butane. The safety data sheet (SDS) lists isobutane, propane, and butane as the ingredients. The SDS physical and chemical properties are listed in yellow below.

As noted, there are three different materials with different chemical and physical properties. The main ingredient of the Power 5x can is isobutane. Many BHO lab operators think that if they freeze the butane cans or the expelled butane THC mixture, it will stay as a liquid because the boiling point of butane is 31°F. That will work for “butane,” but not for isobutane or propane, since their boiling points are much lower (11.7°F and -42°F, respectively). Therefore 99.5 percent of the extracted THC Butane mixture will volatilize into the immediate area and find an ignition source if the Power 5x brand is used. Other brands of compressed “butane” will have varying ingredients.

The data and conclusions from this study will be incorporated into a first responder safety bulletin, in order to bring awareness to first responders who could encounter BHO laboratories in the future.

Download the complete report on the testing as a PDF HERE (1.1 MB).