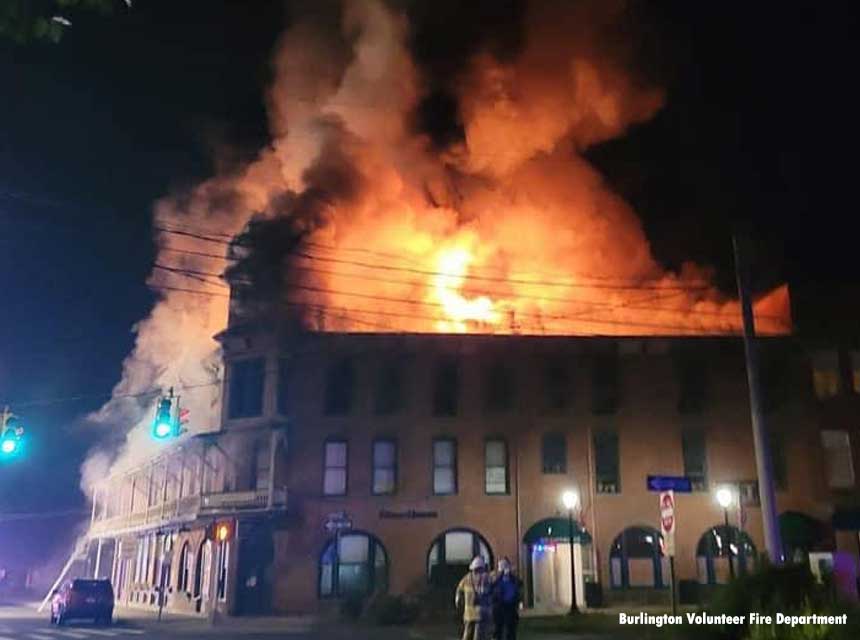 Colin McFadden, a six-year firefighter and EMT in Burlington, had been transported from the scene to an area hospital in critical condition and underwent emergency surgery, according to Burlington Volunteer Fire Department Chief Michael Boucher. During his care, McFadden’s medical team discovered a previously undiagnosed medical condition that caused his illness, Boucher said.

He remained in the intensive care unit Wednesday and succumbed to his illness Thursday morning, fire officials confirmed..

“It is with a heavy heart that we mourn the passing of Burlington Firefighter Colin McFadden, who responded early Tuesday morning to a tragic fire out of a courageous sense of duty and compassion to protect the lives of others,” Lamont said, in a news release. “This is a terrible reminder of the dangers that firefighters put themselves in each time they respond to an emergency. My deepest sympathies go out to his family, friends, and fellow firefighters from the Burlington Volunteer Fire Department.”

McFadden’s team was one of nearly 30 that responded or stood by for the three-alarm fire, which gutted the 124-year-old building that was home to 16 apartments and a half-dozen businesses near the center of New Hartford early Tuesday morning.

As many as 100 firefighters worked at the scene during some point in the night, officials said. They safely evacuated tenants from the apartments and contained the fire, which was reported around 2:20 a.m. The cause of the fire remains under investigation.

After McFadden was hospitalized, the fire department called attention to the state’s “seriously low” blood supply and encouraged people to donate blood, “not only for Colin, but for all who are in need.”

“Everyone has been asking how they can help … you can help by donating blood as soon as possible,” Boucher said Wednesday.

The 26-year-old was “the most gentle, kind-hearted giant in the world,” a friend, Johann Thomsen, said. “He had a heart of gold and he was something truly special and admirable. He was everything that someone wishes to be.”

Thomsen, who met McFadden on an online gaming server in late 2019, said that the two developed a strong friendship through gaming and discussing life, safety and fire protection technology. The two, who never met in person, would play online together for hours.

“We’d be sitting in hourslong calls and I would hear his fire tones go off in the background and he’d say ‘I got to go!’ and he’d leave it on so we could hear him on the radio as he went to whatever call he was sent out to,” Thomsen said. “We would sit there and listen to him do his thing and we were always very proud of him.”

McFadden’s love for firefighting even translated in his online gaming, as Thomsen explained they would play emergency-response games and even built a fully working fire alarm system in Minecraft together.

McFadden is the second Connecticut firefighter to die in the line of duty this year.

In mid-May, a fire on Valley Street in New Haven left two firemen “lost and disoriented.” Lt. Samod Rankins and Firefighter Ricardo “Rico” Torres were pulled out of the home unconscious.

Rankins was critically injured, but survived the blaze; Torres succumbed to his injuries.

Thousands of fire personnel, dressed in their navy blue suits, white gloves and individual badges representing their respective communities, traveled from around the country to honor the 30-year-old New Haven firefighter at his funeral.

The Burlington Volunteer Fire Department has not yet disclosed plans for McFadden’s funeral arrangements.