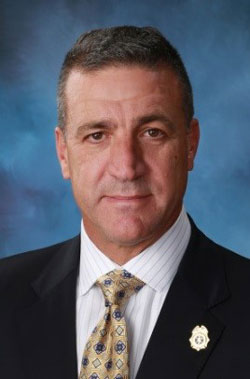 The Fire Department Safety Officer Association (FDSOA) announced Royal P. Mortenson, Director, Illinois Fire Service Institute (IFSI) will be the keynote speaker for the 2020 Health and Safety Forum to be held in January 13-16, 2020, in Scottsdale, Arizona.

Mortenson has served as the Director for the IFSI since September 2012. He sets direction for all activities and training of the institute. In addition, he is also a sitting member of the Illinois Terrorism Task Force (ITTF), supporting the Director of IEMA and the all-hazard state-wide disaster response capability. Mortenson represents the Illinois fire service, the University of Illinois, and IFSI in Springfield and Washington, D.C.

Crisis and Leading When It Counts

Colonel Mortenson studies include the National War College (2004-05), National Defense University, in Washington DC where he earned a Masters Degree in Strategic Studies; Marine Corps Command and Staff College and the School of Advanced Warfighting (1998-2000) earning a Masters Degree in Military Studies and the Marine Corps Amphibious Warfare School (1990-91). Colonel Mortenson also holds a Bachelor’s in Criminal Justice from the University of Wisconsin-Milwaukee.

Mortenson’s keynote will focus on leadership and is titled Leadership Maxims for the Individual: 12 Maxims that Define Who You Are as a Leader and he will describe the foundation of good leadership and of being a good leader thru 12 maxims (rules to live by) that are essential for successful leadership.  Mortenson will also offer a program during the Apparatus Maintenance & Specification Symposium, January 13th to 15th.

FDSOA Chairman, Eric Valliere, added “As your Chairman, I am thrilled that Colonel Mortenson has agreed to be our keynote speaker at the January 2020 conference in beautiful Scottsdale Arizona. He brings a diverse background and knowledge base as a leader that he is excited to share. As you know, leadership is a fundamental need in the Fire Service at all levels and a necessity to be a respected Safety Officer.”

Connecting with the Community: Keep Matches and Lighters Away from Kids