One day in February a few years ago, we responded to a call for a vehicle accident. Dispatch had updated information given en route telling us that the vehicle had collided with a train at a land railway crossing. On arrival, it was a confirmed single vehicle involved with a train. The vehicle had been dragged down the rail line about 40 feet, resting on the rail line embankment with a portion of the vehicle under the rail car.

Inside the vehicle was a lone occupant in the driver’s seat who had sustained visual facial and head trauma. Initial reports indicated that the driver was trapped with his feet and legs pinned under the dash. Upon initial survey of the vehicle, it was discovered that the driver’s legs were not pinned and were able to move freely out of the vehicle. Firefighters pulled a hoseline off the apparatus and charged it to provide water protection for the responding crew members. Any vehicle accident will have fluids leaking from the vehicles involved and this can lead to a fire created from sparks or other sources of ignition. This vehicle accident left plenty of gasoline, diesel, and other car fluids on the ground around where personnel were working. Extrication equipment was also removed from the apparatus and placed at a staging area near the vehicle.

Upon arrival of EMS, paramedics conducted an assessment along with the site supervisor to determine the extent and nature of the patient’s injuries. Seeing as the vehicle had collided with a train at a high rate of speed, serious internal injuries were suspected. This prompted EMS to request an air ambulance to respond to the scene (photo 1). 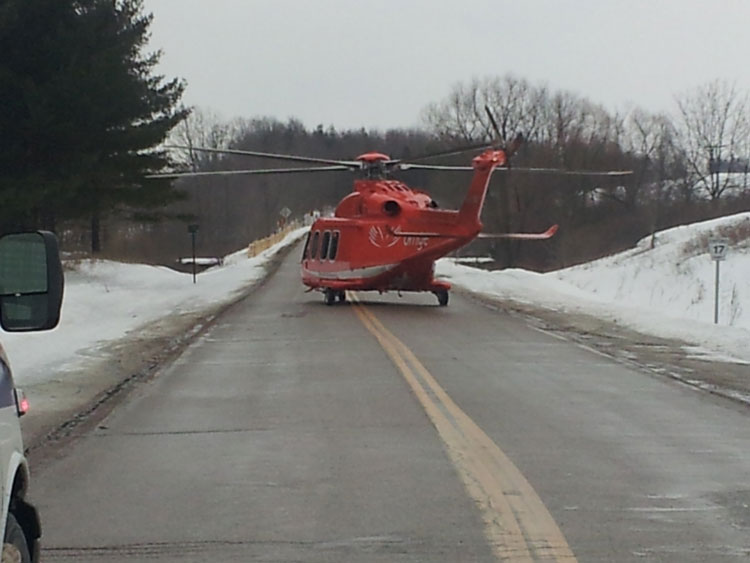 No matter where you are located or what type or size of fire department you work for, there is a good chance that you could deal with the possibility of having an air ambulance respond to your scene and land. When this occurs, there are some important safety factors that need to be remembered and implemented to keep everyone on scene safe. The air ambulance service trains regularly with the fire service to ensure personnel are familiar with the protocols for landing and working around an air ambulance. It might be a good idea to contact them to set up a training time as part of an annual training plan.

When the air ambulance arrives near the scene, they will conduct a scene survey of their own. This will involve a low circular flight pattern over the incident scene. This is done to determine if the landing zone is the appropriate size, if there are no immediate hazards in the vicinity (such as electrical wires), and to let everybody on scene know that they are coming down soon. A recommended appropriate landing zone size is 150 x 150 feet. This size of landing zone allows for a large helicopter to land safely. The ground needs to be solid, such as an asphalt pavement or concrete roadway, so that the helicopter will not sink into it when it lands. If the pilot determines that the landing zone is not adequate, they will choose one of their liking.

The pilot will be in constant communication with a landing zone officer prior to landing. This person can be any firefighter, police officer, or EMS member. If chosen for this task, be sure to communicate clearly and effectively with the pilot. You will need to identify yourself as the landing zone officer to the pilot so that they know who they are speaking with. Give precise directions of the landing zone and observations to the pilot as they are landing so that they know exactly what they are dealing with on the ground. Observations can include landmarks around the landing area, overhead hazards, and wind direction.

Prior to the helicopter landing, all loose debris needs to be picked up and secured or else it becomes a projectile. This includes an uncharged hoseline, equipment from the fire apparatus lying on the ground, and any objects that are small.  Any projectile can easily cause injuries to responding personnel on scene or mechanical damage to the engines of the helicopter when the debris is sucked into the engine intakes.

When the helicopter is landing, there will be a production of downwash from the rotors. The downwash produced can be as fast as 100 mph, blowing anything in its path. Protect members’ eyes either by wearing safety glasses or turning away until the helicopter has landed. The same is true when it comes time for the helicopter to take off. When the helicopter was landing at our accident scene, snow was blown around, producing a whiteout condition. All personnel had to turn away momentarily to prevent flying snow particles from entering their eyes. 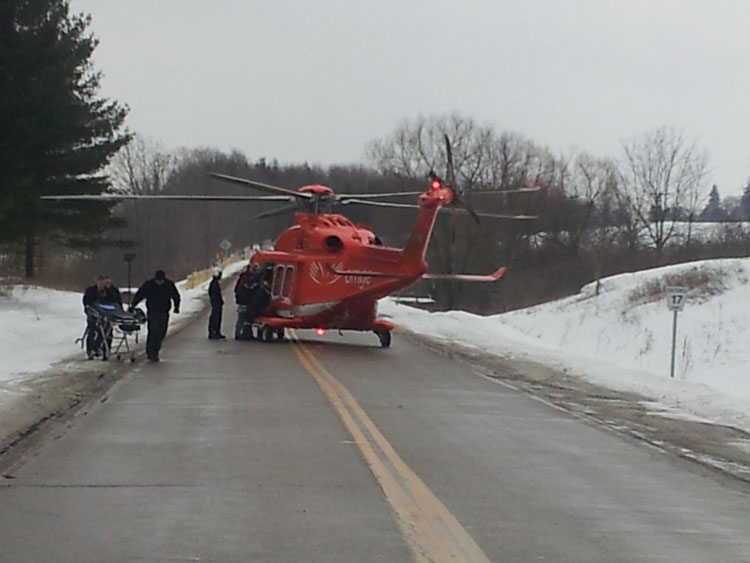 In photo 3, you can see two EMS personnel departing from the vicinity of the helicopter. Notice how they are positioned. They are hunched down while walking under the canopy of the rotating blades. The blades of the helicopter are the most dangerous part for any personnel approaching. As they spin, they look invisible but are very real and present. Walking upright will only expose your head to the blades, which could produce some bad results.

Once on the ground, the helicopter will sometimes keep the engine running and the blades spinning at idle speed so that a quick departure can be accomplished. When this is the case, you will need to protect your head, literally, by staying low when approaching the helicopter.

Always approach the helicopter from the sides directly and not along the tail portion. The rear and front areas are the more dangerous zones because the pilot cannot see you if you are in the rear and the blades are tilted forward in the front, leaving little room to approach. There is also a spinning tail rotor in the rear.

More information about helicopter safety can be obtained from your local air ambulance provider. They will sometimes even offer practical training to personnel so that they become comfortable and confident with working around a helicopter.