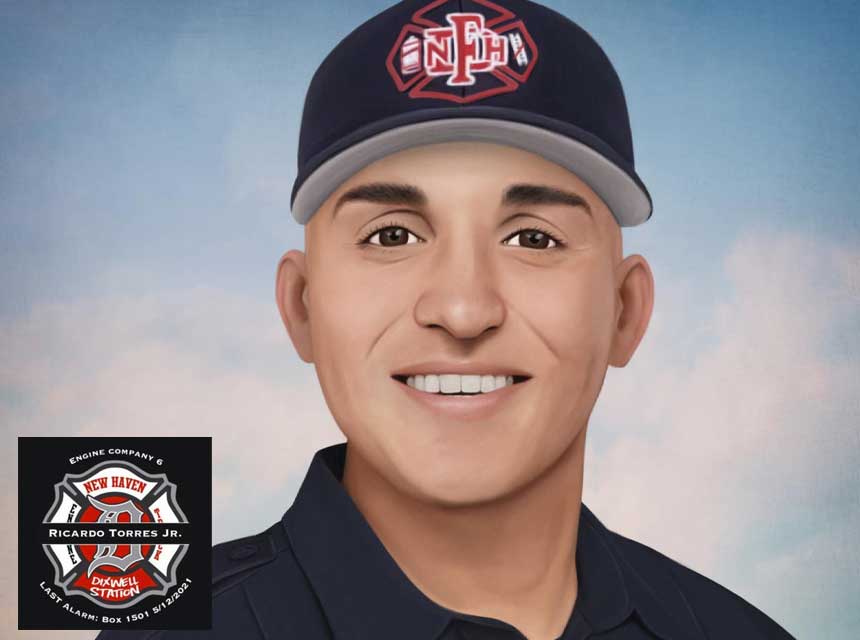 May 17—NEW HAVEN — The funeral for a city firefighter who died while battling a fire on Valley Street has been scheduled for Thursday.

Ricardo Torres Jr., 30, left behind his wife, Erica Martinez, who is pregnant, and son Oliver Torres, according to his obituary.

Torres was the son of Cathy Foster-Mendez and the late Ricardo Torres, according to his obituary.

During a prayer vigil Saturday, Foster-Mendez gave thanks to the community, saying, “If anyone would lay their life on the line for anyone, it was Ricardo.”

The vigil was held outside Pitts Chapel Unified Free Will Church, to honor Torres and pray for his family, pray for the recovery of critically injured firefighter Lt. Samod “Nuke” Rankins, who is making progress in the burn unit at Bridgeport Hospital, and to honor another firefighter, William McMillian, 27, who died unexpectedly May 6.

Mother of Fallen CT Firefighter Thanks Community During Vigil

There has been an outpouring of support for the firefighters’ families.

City Emergency Management Director Rick Fontana said Monday there had been no new developments in the investigation.

Torres “followed his passion of becoming a firefighter as a member of Recruit Class 62. He joined the New Haven Fire Department in July 2019 and was assigned to Engine 6, Third Division,” his obituary says. “It was here that he experienced and enjoyed the camaraderie of his second family and realizing his dream since he was two years old.

“An amazing son and brother, Ricardo grew up in West Haven and loved playing hockey, going fishing and snowboarding. He also loved cooking and eating,?” it said.

A Catholic service will be held at 10 a.m. May 20 at St. Mary Church, 5 Hillhouse Ave., according to the obituary. Masks are mandatory while in church. Burial with full departmental honors will follow in Cedar Hill Cemetery in Hartford. In lieu of flowers, memorial contributions may be made to National Fallen Firefighters Foundation, www.firehero.org, the obituary said.

Memories can be shared, the livestream of the funeral service can be watched and the guestbook for Torres can be signed online at the Iovanne Funeral Home Inc. site at www.iovanne.com.

WV Firefighter Dies After Being Found Unresponsive in Fire Station