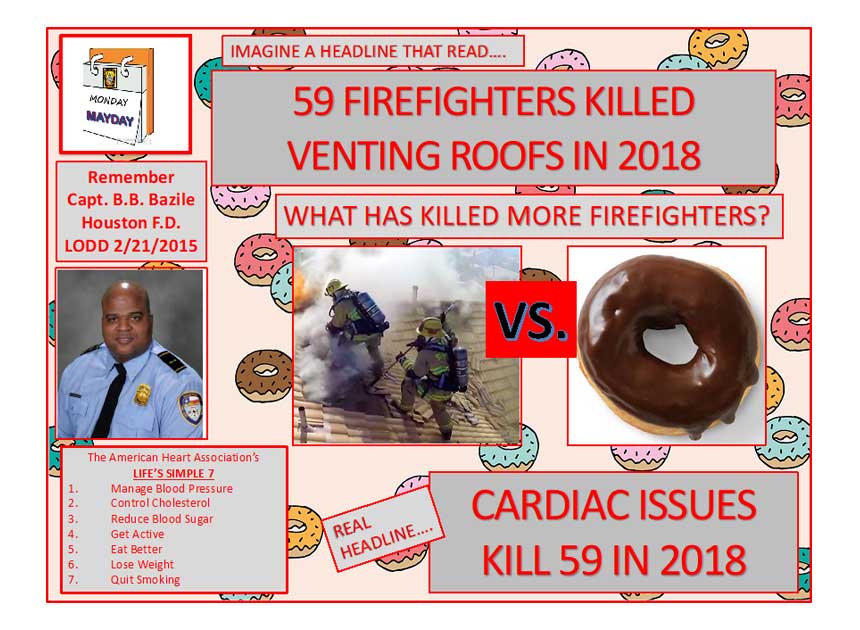 59 FIREFIGHTERS KILLED VENTING ROOFS IN 2018!!  Could you imagine the uproar if this fake headline were true?!? The fire service would quickly mobilize to stop this firefighter killer. We would develop a method to ensure vertical ventilation would be accomplished without having to get onto the roof. New technology would be invented and every fire department would purchase it.  Classes would be presented at every conference teaching the new tactics and techniques. T-shirts would be designed showing the new logo for the “Never Roofers” or “NO ROOF NATION!” Firefighters would get the new logo tattooed on their bodies. But, alas, 59 firefighters were not killed while performing vertical ventilation.

February is Heart Health Month. This year (like last year) the February Mayday Monday is about keeping you healthy and ready to fight!! Need help? Start with the American Heart Association (AHA) Life’s Simple Seven:

This month we remember Captain Dwight “B.B” Bazile from the Houston Fire Department. B.B. died February 21, 2015 after battling a house fire.  During the investigation, it was found that he had some underlying health issues which may have increased his chances of a heart attack.  Here is a quote from the Texas State Fire Marshal’s report:

Abnormal Electrocardiograms (EKGs): An EKG in 2008 revealed electrical problems of the left ventricular hypertrophy (LVH), and a possible old (remote) infarct (heart attack) in the anteroseptal region of the heart.

Why is this important? The AHA says: “Firefighters who died from cardiac arrest were much more likely than those who died of other causes to show signs of both atherosclerotic and hypertensive heart disease at autopsy.” If you have already shown signs of compromise, you need to act on these findings. Please get checked and work on getting well. Take this February and GET CHECKED!! We must work on the real firefighter killer…CARDIAC ISSUES!!

Thanks to Food on the Stove for the idea for this month’s Mayday Monday!  Thanks to Bill Carey of FirefighterNation/FireRescue Magazine for the stats.