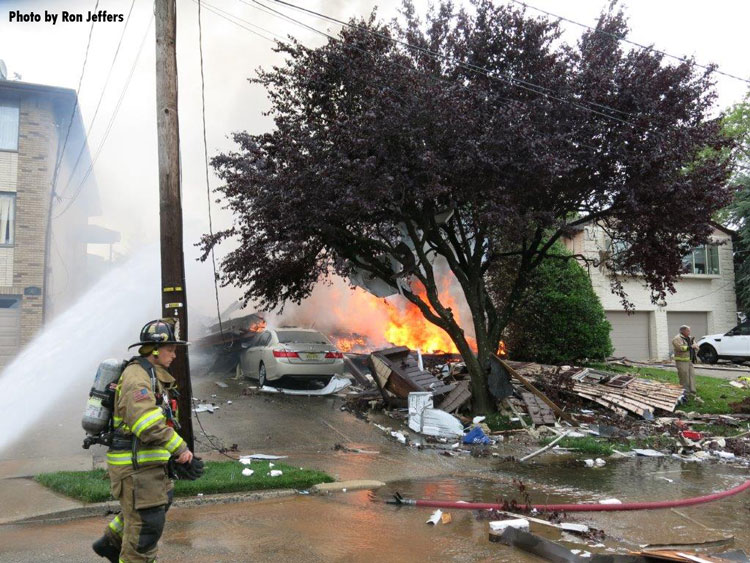 Photos and report from Ron Jeffers

One man was taken to the hospital after an explosion on June 17, 2019, leveled an Abbott Avenue home in Ridgefield, New Jersey.

Around 11:25 a.m., homes shook in the quiet neighborhood, sending numerous first responders to the scene. An off-duty police officer who lives in the neighborhood and had his portable radio with him called the explosion in to his communications center. Police Chief Thomas Gallagher said 14 police officers responded. Quickly arriving on scene, the officers heard a noise at the rear of the home. A resident was calling for help. The off-duty officer, P.O. Cigercioglu, said he and other officers lifted up a large plank of wood and responded to his calls. They observed the man and told him that the house was on fire and he’d have to crawl toward them to get out. He was then assisted by the officers to safety. Some offices used fire extinguishers to hold back flames as the victim was being removed.

The fire department was dispatched to a reported house explosion with one person unaccounted for. They then received word that the occupant was out and he had told police that no one else was in the building.

A column of black smoke rose above the home, attracting news helicopters.

Firefighters called for Public Service Electric & Gas (PSE&G) to respond, with a rush, to shut down the dwelling’s gas supply. Firefighters set up water curtains to wet down the exposing dwellings. There was a field of debris that covered neighborhood houses. Parked cars in the area were damaged.

“We had to hold off fire suppression operations due to a gas leak,” Deputy Fire Chief Dave Brierty said.  “Once the gas leak was taken care of by PSE&G we were able to extinguish the fire.”

The neighborhood buildings reportedly suffered minor damage. The power was shut off in the area during firefighting operations.

The injured occupant was transported to Hackensack University Medical Center and was reported to be in stable condition. One firefighter was transported to the hospital and treated for heat exhaustion. Two police officers also suffered minor injuries.

Local firefighters were assisted by fire units from Cliffside Park, Palisades Park, and Leonia at the scene after a second alarm was struck.

When the gas was shut down, firefighters extinguished the flames and began removing piles of debris to extinguish deep seated flames under the debris.

According to a report from the Daily Voice , the victim, 48, succumbed to his injuries.

Vision 20/20 Releases Study on Smoke Alarm Issues in the United...