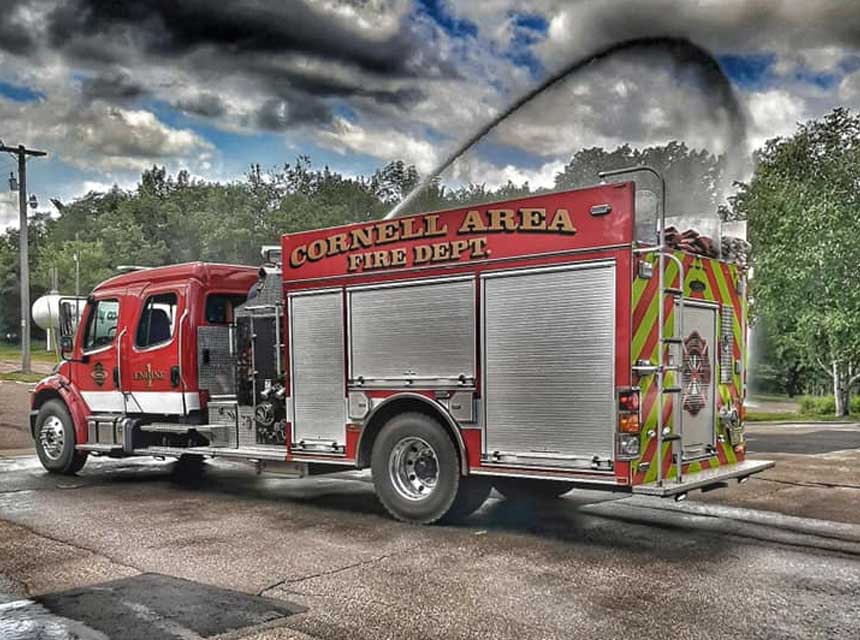 Oct. 13—CORNELL — Cornell firefighter Justin Fredrickson says he is fully recovered from four surgeries this year after he was bizarrely struck by a bullet while extinguishing a house fire near Sheldon on Feb. 19.

Apparently, a loaded .38-caliber pistol within the house had fired, although no one was inside the structure. The gun became so hot due to conditions from the fire that it began to fire five or six rounds, leaving exit holes in the wall of the house, as bullets flew outside. One of those stray shots struck Fredrickson along his rib cage on his left side.

Fredrickson said he didn’t know what hit him.

“All of a sudden I felt something hit me in the side,” Fredrickson recalled. “It was a burning and stinging feeling. I just thought I got hit by a two-by-four or something that blew out of the house.”

Other firefighters closer to the house heard the shots go off. They looked at Fredrickson and saw he had been injured. They ran over and helped him to the ground, then got his gear off of him.

Fredrickson was taken to a hospital in Ladysmith, then airlifted to the Mayo Clinic Health System hospital in Eau Claire. He had an emergency surgery that night to remove part of his colon and repair his damaged spleen, which needed to be cauterized. However, the bullet remained lodged in his back.

“It missed my spine by a half-inch to an inch,” Fredrickson said. “It’s freaky.”

Mitigating the Dangers of Ammunition at Fire Incidents

Video on Effects of Fire on Stored Ammunition

Cornell Fire Chief Denny Klass wasn’t at the fire scene. He was dumbfounded when he got the call that Fredrickson had been struck by a bullet and needed to go to a hospital. Klass said that with COVID-19 protocols, he couldn’t enter the hospital to see his injured colleague. It was nerve-wracking to wait to hear news of his condition.

“When I finally got to hear his voice … it still brings me chills,” Klass said. “We’re very fortunate everything turned out the way it did.”

Fredrickson had two more surgeries within the next week.

“They cut me open and flushed me out because I was going septic,” Fredrickson said. “If they hadn’t done that, I would have been dead by the morning.”

When Fredrickson was allowed to leave the hospital, he was greeted outside by six firetrucks from different nearby firefighter agencies. They formed a parade, heading from Eau Claire to the Cornell Fire Station, with four other departments sending vehicles during the trek home.

Klass said in the days after the Feb. 19 fire, his office was inundated with calls of support from fire departments across the country. Departments sent Fredrickson their T-shirts as gifts. They heard from firefighter units from New York to Florida.

“It’s a brotherhood in the fire department, it really is,” Klass said.

While Fredrickson was out of the hospital, he couldn’t return to his job until April. A fundraiser benefit was held for him, and worker’s compensation covered his bills.

“It’s pretty amazing, a small community like this, the way they rallied together for him,” Klass said.

Fredrickson was surprised that the bullet remained lodged in his back. He had another surgery in mid-May to have it removed.

“They said I could have lived with the bullet in me,” Fredrickson said. “But it was moving. I could feel it roll with my finger.”

Fredrickson has the bullet at home, a souvenir of his survival.

Frederickson, 36, graduated from Gilman High School in 2004. He joined the Cornell Fire Department in 2005, and he’s now a 16-year veteran of the agency. The department has 30 firefighters, covering the city of Cornell and parts or all of eight surrounding townships. Fredrickson knew people involved in the department, and that’s why he joined.

“I just enjoy helping and serving the community — helping people when they need it the most.”

Fredrickson works at Lake Holcombe Sales & Service. He has his firefighter gear in his vehicle. When the call came at about 2:30 p.m. Feb. 19 that Sheldon was looking for mutual aid to extinguish a house fire, Fredrickson left work and made the 10-minute drive to the home in the town of Willard. He was among four Cornell firefighters who responded to help out.

Fredrickson has seen plenty of strange things in his firefighter career, but didn’t expect to be hit by a bullet.

“It’s crazy how it all happened,” Fredrickson said. “No matter how much training you do, you just never know.”

Fredrickson coaches wrestling for the Cornell-Holcombe-Gilman co-op team, and he used to coach football. He feels like he has fully recovered from his injuries and is ready to help out whenever he’s called upon.

“He can do anything he could before,” Klass said. “He’s a good, hard-working guy. Our fire department rallied around him, financially and spiritually. It’s great to have him back, 100%.”

Klass, who has been involved in firefighter for five decades, said that as policy, whenever they show up at a fire scene now, they ask if there are loaded guns in the home, and if so, where they are located.

Fredrickson said he is thankful for all the support he’s received in his recovery this year.

“There is no way I could ever thank people enough for what they’ve done for me,” he said. “There is not enough ‘thank you’s’ I could say to show as my appreciation.”