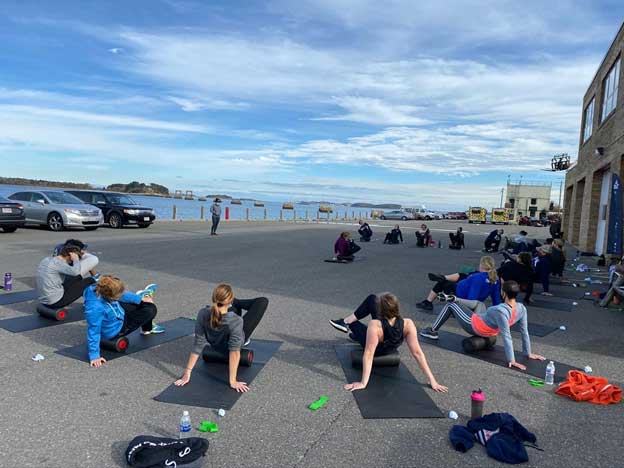 In 2020, the Boston (MA) Fire Department (BFD) closed out October with a first-of-its-kind event. The BFD and its Safety Health and Wellness Division hosted an all-female class of firefighters, dispatchers, and support staff from 14 agencies in the Boston area at its Training Academy at Moon Island. The group assembled to participate in a four-day “O2X Human Performance Workshop,” tailor-made for the particular needs of women in the fire service.

“Boston Fire is proud to host this event for the women serving in our department and other area agencies,” said Boston Fire Commissioner Jack Dempsey. “Female firefighters work alongside their male counterparts, doing the same job, with the same risks, and we felt that it was important to offer this special opportunity for them to learn to perform better, live healthier, and retire stronger with training specifically targeting women.”

In a quick transition from concept to reality, Commissioner Dempsey and the BFD leadership spearheaded this initiative with an outreach to surrounding jurisdictions, yielding an overwhelmingly positive response. In days, the class filled to capacity, and a few weeks later, more than 40 women were headed to Moon Island. They braved dreary New England weather, and, following strict COVID protocols, participated in the first fire service performance training workshop, designed specifically for them.

“We’ve always heard about the brotherhood, and now it feels like there is also a sisterhood, if that makes sense,” Sheila Leahy says about the growing bonds between female firefighters. “But I just call it a family.”

Leahy has been a firefighter with the BFD for 20 years, following in her father’s footsteps. Although she feels widely accepted as part of the family of firefighters that make up her nearly 1,500-member department, she’s one of only 19 women firefighters.

Although women have made major strides, the firehouse largely remains a man’s world. According to the National Fire Protection Association, as recently as 2018, women made up just four percent of career firefighters (Evarts and Stein, 2020). Fortunately, although small in number, women in the fire service are joining forces and building bonds and support networks with one another.

The course participants brought a wide range of experience levels, ranging from recent academy graduates to chiefs, and from rookies to fire service veterans of more than 20 years. Each woman has had her own path to the fire department and her own experience cracking into the culture of a male-dominated line of work.

Sara Finn has worked as a firefighter/emergency medical technician for just a couple years. Like Sheila, she is the daughter of a career firefighter; her father and grandfather worked at the same firehouse where she now serves.

When she was a little girl, Sara never dreamed of becoming a firefighter. “It wasn’t something that came to mind as being a woman’s thing to do. I always knew I wanted to be in the profession of helping somebody, helping people. As I got older, I realized that women can do this job, and that was it for me.”

Workshops like this remind us that although the number of women in an individual department may be small, women in the fire service aren’t alone and share a sisterhood with women across the country. Sara is one of five women in her department of 107 firefighters. “It was great seeing and being with like-minded women. We all have the same worries, it turns out. We all have the same struggles. It was great to get to be around and meet others who go through what you go through every day.”

The feeling of isolation is one of the main concerns for female firefighters, according to Sheila, and one reason bringing women firefighters together is important. “To meet and bond with other women … having a support network, a feeling that you belong, is really important. A lot of people wind up feeling isolated, even though they’re part of a larger group. Isolation is a real risk for women in the fire service,” she says.

To execute the course and the curriculum, BFD turned to a long-time partner, O2X Human Performance. Founded by former Navy SEALs, O2X is dedicated to serving those who serve others. Through in-person sessions and virtual resources, O2X creates customized training and education designed to help first responder communities, the military, and federal agencies optimize every aspect of their people–their most valuable resource. Over four days, O2X deployed an all-female team of specialists and instructors to deliver the workshop.

This course covered chronic job-related stress, such as feelings of isolation and the trauma that first responders deal with and provided skills and tools specifically to help them mitigate those stressors. The team of specialists helped to destigmatize post-traumatic stress by sharing the common signs and symptoms as well as various ways to handle the stress common to tactical communities. More specifically, they discussed targeted strategies like mindfulness, tactical pauses, and breathing techniques to manage stress, and building routines to control what you can, when you can.

Physical injury risks are also a concern for women in the fire service. According to the study, Current Female Firefighters’ Perceptions, Attitudes, and Experiences with Injury, “[F]emales being in a male-dominated field contributed to an increased risk for injury. Being the minority group pushed women to try harder, get stronger, and oftentimes not ask for the help they needed, even on tasks that, to be completed safely, required more than one person.” (Hollerbach et al., 2017).

In addition to providing tools for mental health, the course instructors also provided instruction on proper exercise techniques to avoid job-related injuries, including movements to improve shoulder and hip mobility, increase core stability, and develop the energy systems necessary to optimize performance. Working together to increase mental and physical well-being provides an incredible opportunity to build lasting relationships among the participants. Sheila says these bonds, paired with the support between the generations of women is incredibly important. “Years ago, I had the old-fashioned mindset, ‘Well, I did this on my own; they can do it on their own, too.’ And I don’t think that was helpful to anybody.” At this workshop, she saw the generations coming together. “I think it was a great benefit to a lot of people to meet women in other areas—younger women, older women, women in all the different ranges.”

Sheila noted a comment from a younger firefighter that confirmed the feeling was mutual. “She actually mentioned her appreciation for the women who’ve gone before her and made it as easy for her as it is today. And that’s not easy; it’s not easy, but maybe it’s easier for her than, say, the person who got on in the ’80s,” she says. “So, I thought that was pretty cool to get the different perspectives and keep each other in check. Ok, that’s what you went through, but how can we make that better in the future?”

Sara echoed that respect for her colleagues who came before her, as well, pointing to another participant from her department who’d been a firefighter for about 20 years; it was women like her who showed Sara that women can do the job.

Along with the newfound friendships with women outside of her department, Sara says her biggest takeaway from the workshop was one of O2X’s key tenets, “I loved the ‘getting 1% better’ every day. It can be overwhelming trying to change your lifestyle, trying to eat healthy, trying to work out more, mentally, and I love that,” she says. “I’ve been actually trying to use it every day and telling everybody about it. I have my family doing it now. Just some little thing. It could be the smallest little thing throughout your day, but you’re focusing on that.”

In addition to taking that concept to heart in everyday life, it’s also fitting for the women to work on these small incremental changes as they forge forward in their professional lives, building a sisterhood along the way, and cutting down the barriers of isolation.

“I think the networking is growing, and I think we can be advocates for each other a little more in the future or in the present and in the future—we can’t change the past, but certainly we can improve in the future,” Sheila says. “We’ve always heard, ‘leave it better than you found it,’ and that’s kind of what I hope we’re all doing.”

Kara Pogue is a freelance writer focusing on coverage of the fire service, tactical populations, and human performance. As the daughter and granddaughter of long-time volunteer firefighters, and the wife of a Naval Special Warfare Officer, Kara has a deep personal connection to the tactical space. Kara was previously the executive editor for the UDT-SEAL Association’s quarterly journal, The Blast.

Submit Photos for a Chance to be Featured in the NVFC...