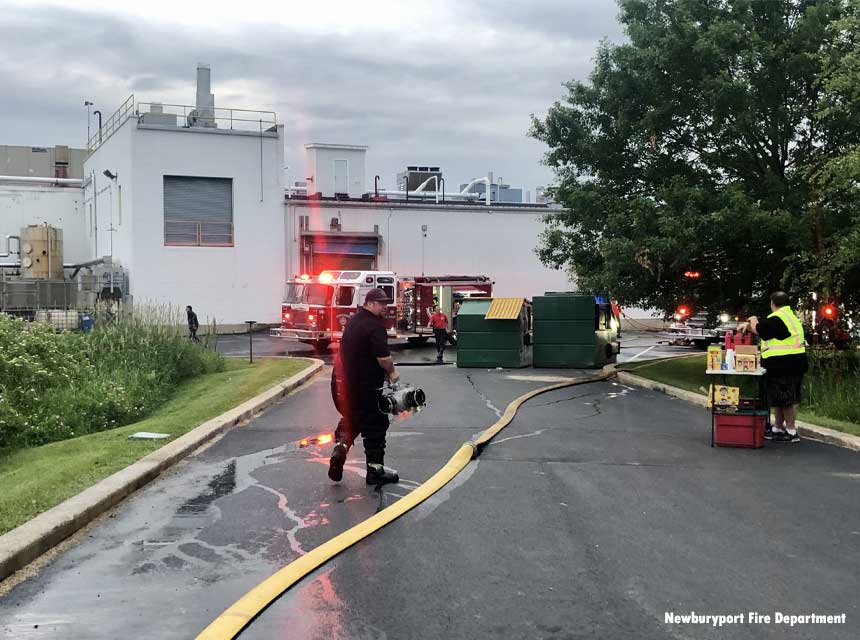 The Daily News of Newburyport, Mass.

Jun. 13—NEWBURYPORT — The Newburyport Fire Department battled a chemical fire at a plant in the city’s industrial park on Friday evening, the second such fire at the company in the last year and a half.

Fire Chief Christopher J. LeClaire said in a release that crews responded to a fire alarm activation at the PCI Synthesis/Seqens, a pharmaceutical chemical company, located at 9 Opportunity Way at 5:36 p.m. Friday. When Engine 5 arrived firefighters found heavy smoke pouring from several roof vents and called for a working fire response. Minutes later, firefighters determined it appeared to be a chemical fire so LeClaire called for a second alarm response.

Firefighters were able to knock the fire down after about 20 minutes, aided by the working sprinkler system in the building. Because chemicals are stored and used in the building, a Tier 1 Hazmat incident was declared, consistent with the commonwealth’s Hazardous Materials Emergency Response protocols. The hazmat declaration sent a regional team of specialists to the scene to aid Newburyport firefighters.

Crews determined there was no danger to the public.

The incident was declared under control at 6:48 p.m.

“Incidents in large industrial plants need to be managed with the utmost care and caution. Thankfully we have an extensive mutual aid network and well-trained regional Hazmat teams who respond quickly during these types of incidents,” LeClaire said. “Thankfully, there is no danger to the public.”

No injuries were reported. The origin and cause of the fire are under investigation.

In addition to the Hazmat team, the Massachusetts Department of Environmental Protection responded to the scene.

The same Seqens plant was the site of a serious fire and Tier 2 Hazmat incident in February 2020.

Deputy Chief Stephen Bradbury said at the time that when firefighters responded to a fire alarm call around 4:30 a.m. they saw smoke inside the plant. While firefighters were investigating the smoke, three explosions occurred in a different room, so they immediately left the building.

According to PCI’s website in early 2020, the facility is more than 75,000 square feet and is equipped with 22 reactors providing more than 20,000 gallons of capacity.

In 2015, PCI Sythesis was fined by the Occupational Safety and Health Administration (OSHA) for a violation involving 23 people. It was classified as “serious” by the federal safety agency.

Visit The Daily News of Newburyport (Newburyport, Mass.) at www.newburyportnews.com