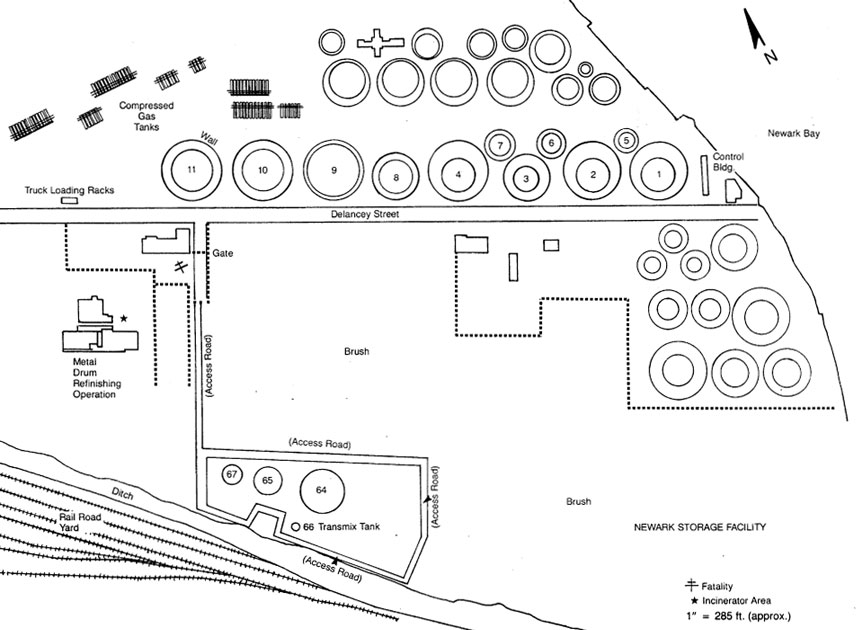 On January 7, 1983, at 12:16 am, a fire erupted at Doremus Avenue Texaco storage facility in Port Newark, New Jersey. This facility housed 26 storage tanks for various petroleum products. The enormous explosion was felt as far as 75 miles away from the incident, as there were several minor explosions that took place before the final devastating disaster. This trail of events resulted in the loss of 3 million gallons of gasoline due to the overflow of gasoline in and around the facility.

The cause of the incident was ultimately the ignition of vapors produced by a tank overfill. A regular check of the operation was scheduled to be conducted at 12:00 am, but this check with the Newark Fire Department never took place and the procedure continued. Two men, Phil Heisse and William Van Zile, had just completed their shifts when the three tanks holding gasoline combusted only 2,500 feet away from them. Only Heisse survived the impact and around 24 individuals near the area were injured.

This large of a fire was a threat to any storage tanks in the vicinity, so police and fire departments arrived right away to prevent any additional damage. The heat was so intense that even the firefighters had difficulty approaching the scene and it took multiple hours to contain the blaze. The entirety of the building, as well as many vehicles and structures, were destroyed as a result of this incident and the explosion lingered for blocks around the site.

Please consult the sources below to learn more about the 1983 Newark Explosion.

Explosion at Munitions Factory in Serbia Kills at Least Two