Not all fire disciplines are created equal. However, that doesn’t mean any specialty is better or worse than another. Industrial firefighters badge in and protect facilities around the world daily. From private factory assembly lines to major oil and gas production facilities, the engine is staffed and ready to respond at a moment’s notice. Although we aren’t venting roofs or using irons to pop doors, our operations include key tasks that we must master and perform as swiftly and as effectively on arrival at an industrial incident as municipal fire companies must when pulling up to a structure fire (photo 1). 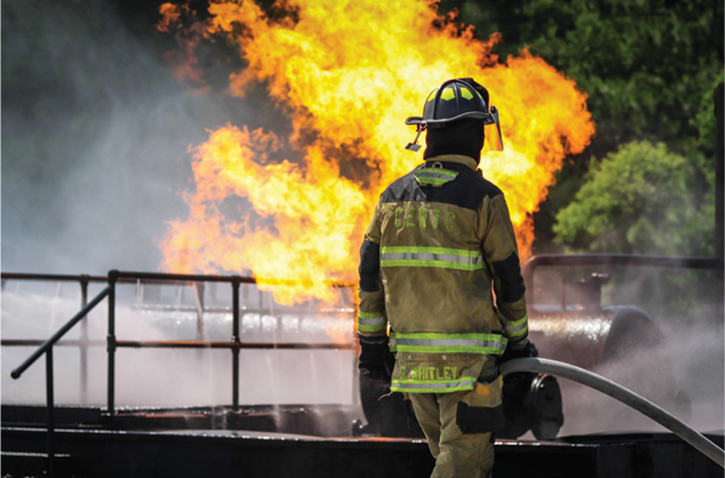 In firefighting, as in hazardous materials response, we have a process to follow: gross decontamination, followed by technical decon (called “gross knockdown” in industrial firefighting), followed by technical surgical line placement. Although Class A materials may potentially be involved as secondary fuel in industrial fires, our main focus is flammable liquids and solids.

When I teach new emergency response team members in our oil refinery facility about National Fire Protection Association (NFPA) 1081, Standard for Facility Fire Brigade Member Professional Qualifications, incipient stage; our small burns and live fires lead up to one large burn at the end of the day in which we combine all the aspects we have discussed throughout the day—a three-dimensional fire involving pressurized liquids and gases. The NFPA 1081 incipient standard generally states that the incipient stage is no longer relevant when the level of personal protective equipment (PPE) must change. These classes require work-issued PPE only, such as Nomex® jumpsuits, gloves, safety glasses, and hard hats.

The relevance of this comes into play once the prop is lit and the employees feel the real heat for the first time. The fire builds as the radiant heat increasingly begins to sting and reach out to them. Once we achieve a fully lit prop, we allow the teams to use two streams only, two fixed master streams. By this point, the employees are facing away from the fire, as the heat has reached an almost uncomfortable level, as the streams are charged in a power cone to almost immediately alleviate the extreme heat and contain the original fire and prevent it from reaching out toward them. Although a well-placed line can certainly mean the difference between success and failure in all aspects of firefighting, industrial firefighting has a special place for it.

Now, consider refinery occupancies. Large, open tracts of equipment outdoors with lots of exposures to consider. With both of these considered, to even have a ring to begin to fight, we must lay down our ropes. The name of this game is CONTAINMENT. Initial attacks on emergencies beyond the incipient stage need a good solid barricade between it and the rest of the facility or nearby unit. There are no firewalls here; we must use water and weather to our advantage to help set the stage for the main event. The first line on the ground is the master stream. Whether you’re fighting tank fires that need time-consuming line setups for foam shots or a bread-and-butter pump seal fire, the large-diameter hose with a fixed monitor to blitz a fire and keep it at bay is your ticket to a successful fight. Ensure all patterns are preset if possible (photo 2). 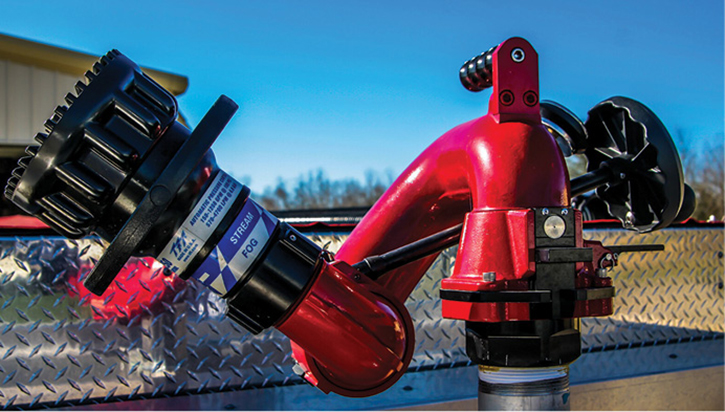 Keep two things in mind when selecting these first lines for placement. First, prevent further spread. Containing the emergency to an isolated area using water curtains or airflow from nozzles sets up your hot zone. Consider this the “transitional” attack of the industrial world. We use this to cool the area, clear up the gross flames or lazy fires, and help us paint a clearer picture of the actual involved process.

Second, these first lines must provide the initial protection from deadly exposures. Exposures can come in many shapes and sizes; but, most importantly, they will kill you if they are overlooked. When speaking of protection from exposures, I do not necessarily mean you need to coat the exposure with water to effectively eliminate it as a threat. On the contrary, if it doesn’t need water, do not spray it. Process lines can have a temperature of more than 600°F in some cases. If a poor scene size-up or preplan does not indicate temperatures of nearby processes and you proceed to douse the area, you may be in for secondary incidents resulting from cracked lines caused by rapid cooling. Use monitors as a shield. Although the smooth bore nozzle may be a useful tool in the municipal world, it is not very useful in these infant stages of industrial emergencies. Use fog patterns wisely to create barriers or shields between incidents and equipment for which rapid cooling is not desired.

Preplanning process units can play a vital role in knowing where you should apply water and where maybe you should not use it so liberally. Although some factors such as electrical shutoffs and remote valves for utilities remain the same on industrial preplans, you should introduce other more complex factors to make the planning more effective.

Many process facilities are equipped with large-diameter monitors that are placed to protect a preidentified high-fire-risk area. These monitors allow for incipient level responders and operational crews to activate and begin containment while fire crews are en route. However, industrial sites can be notoriously crowded or become increasingly cluttered during maintenance periods. This brings a new set of issues to the first-on-scene responders.

Temporary scaffolding or barricades can wreak havoc on preplaced fire equipment that otherwise wouldn’t have been there in the first place. With the large amount of piping and conduit to contend with, scaffold tubing only further destroys nozzle patterns and drives efficiency down. This is where equipment deployment and knowledge come to shine. Does your facility use monitors with different mounting capabilities? If so, how quickly can your firefighters deploy that equipment? We can’t always rely on the notion that our prepiped equipment will be useful. If streams are blocked and you need to move 500 gallons per minute (gpm) of water up 40 feet beyond an obstruction—scaffolding, a crane, or anything else—consider how long it has been since you’ve trained on that. Make this part of your REGULAR training. This should be just as fluid as pulling a crosslay to a fire from the engine.

Every event will have priorities based on a few principles. If you need to make rescues, you must be working to make them happen at any cost with regard to safety. However, consider that you are facing a fire event only and you must prioritize what needs attention first. First, focus on critical exposures, those that will kill you first if not attended to or cooled. You can find them by focusing on what has immediate flame impingement at the time, and break that down even further to which line or vessel has lifting relief valves and which do not.

Physics tells us that heat and pressure are directly related; lifting relief valves tell you that the pressure has risen above what has been engineered for that particular piece of equipment. These are high-priority pieces of equipment that need attention first. Adequate cooling and a quick visual inspection for cracks, tears, or any deformations will tell you if the equipment is close to failing or if you may be able to reverse the effects of flame impingement.

Next in priority should be heavy liquid or spill fires. Spill fires can wreak havoc by covering large areas with leaking fluids, which you can spread farther with the large amounts of water you are adding. You can handle spills somewhat easily by using a good-quality Class B foam to apply a foam blanket. There are different ways to apply foam to a flammable liquid spill, but keep in mind that the foam blanket is good only as long as you maintain its integrity. For a successful foam application, you must compensate for the loss of 10 percent of your reach once foam is educted into your water stream. This reverts back to your initial setup of your water source and engine placement. Once you are set up and your lines have been run, there’s nothing worse than having to break down and bleed hundreds of feet of hose to make a move that should have been thought about before the lines were charged. Use common sense when adding water or foam to locations other than the initial spill fire zone since gouging or breaking a blanket can cause quick reignitions and setbacks. Pressurized liquids are a particularly dangerous threat when using streams on leaking fires. Nozzle streams can break apart leaking hydrocarbon fires and cause them to atomize, significantly increasing the heat load to firefighters in the area or equipment nearby.These fires need to be fully encapsulated to approach or do any work near the source.

For your third priority, take control of any light end vapor fires. As pressurized vapors can for certain cause high-heat loads and be extremely loud, if they are not impinging on any equipment, these fires are generally kept at bay just by their nature. The name of the game is fuel isolation; you must work with refinery operations to shut in fuel sources to stop these fires by removing what’s feeding them.

The first few minutes on scene of any emergency can make or break the outcome down the line. Initial line placement is one of the most critical first steps to success when dealing with heavy fuel load industrial fires. Knowing the proper hoseline size to use, the appliance to deploy first, and the appropriate position for them is paramount to survival. Although identifying process equipment that may become a problem down the line during a fire is important, remember that some basics—line placement, apparatus positioning, and foam usage—can play major roles in industrial fires of any size. You’re only as good as the initial setup your team can make. Make your mistakes in training, not on the fireground.

Ryan Henry is the training officer for two volunteer fire departments in Calcasieu Parish, Louisiana. He works in safety and emergency response for a major Gulf Coast oil refinery. Henry has an associate degree in process plant technology and is a Louisiana State University Fire and Emergency Training Institute certification evaluator. He is also senior editor for HazmatNation.com, a site dedicated to educating firefighters about hazardous materials threats and solutions.

Explosion at Munitions Factory in Serbia Kills at Least Two