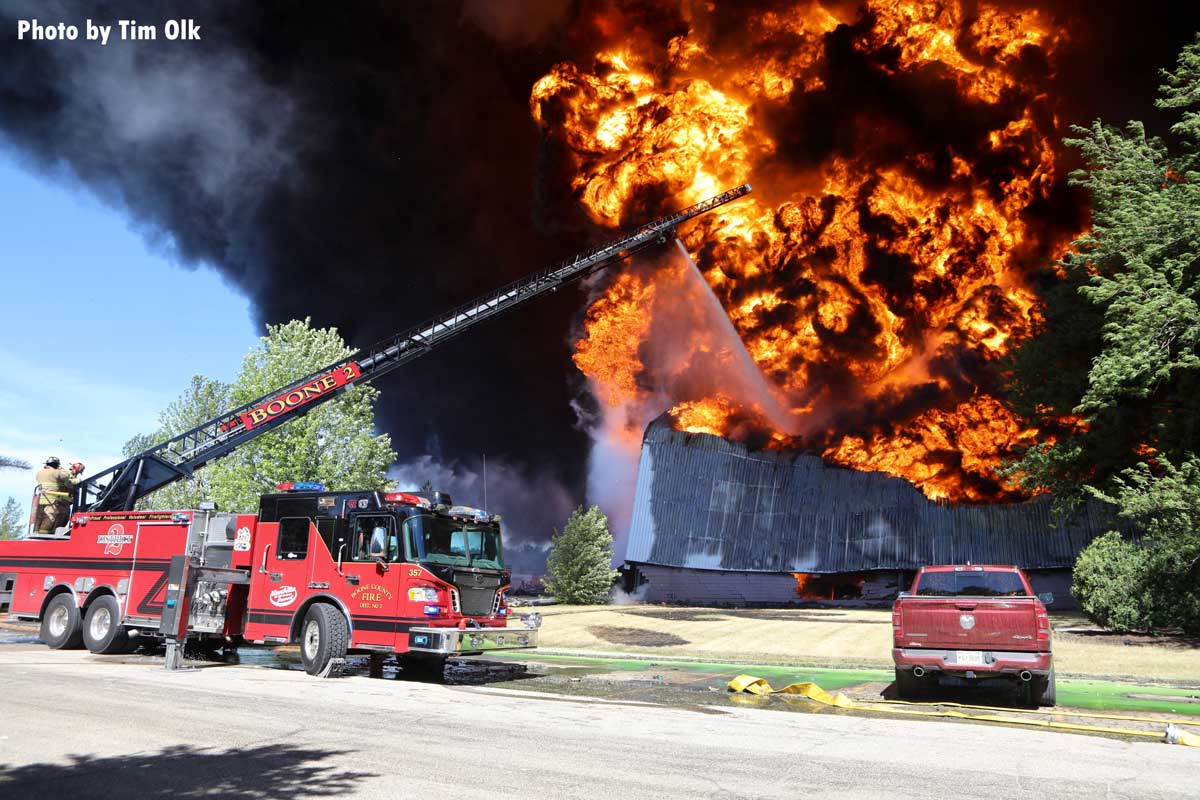 Jun. 14—ROCKTON — A massive chemical fire that darkened skies over the Rock River Valley Monday with plumes of black smoke that could be seen as far as two counties away could burn for days.

As many as 175 firefighters from 45 different fire departments responded to the fast-moving, wind-driven fire at Chemtool in Rockton.

Word of the chemical fire traveled as far as Springfield, where Gov. JB Pritzker activated the State Emergency Operations Center to mobilize emergency response personnel and operational facilities to monitor the fire and environmental impact in Winnebago County.

Chemtool, a grease and lubricant manufacturer, is located at 1165 Prairie Hill Road.

About 70 Chemtool employees and roughly 150 homes within a one-mile radius of the plant were evacuated as the manufacturing plant went up in flames.

No employees or area residents were injured, Rockton Fire Chief Kirk Wilson said at a Monday morning news conference. A firefighter was taken from the scene to a hospital because of respiratory problems. He was treated and released.

The fire started about 7 a.m.

Explosions could be seen and heard throughout the morning, sending ash and debris into yards beyond the mandatory evacuation zone.

The Rockton Fire Department ordered the evacuation for all residents and businesses within a mile of the plant and advised traffic to avoid the area.

Roscoe Middle School, 6121 Elevator Road in Roscoe, was used as an evacuation center.

Rockton resident Tom Buffum, who lives within a half-mile of Chemtool, said he mistook the explosions at the plant for thunder.

“After the third explosion he came into the bedroom whining,” Buffum said of the family dog, Krypto. “He was scared.”

Buffum, his daughter, Laura, two grandchildren, Krypto, a cat and a ferret were evacuated from their home by police. The family was among 15 people taking shelter at Roscoe Middle School.

Fire cause not known

“We have confirmed all on site are safe and accounted for. Our concern right now is for the safety of all our employees and the surrounding community. …

“We do not yet know what caused this incident, but we will be working with local authorities and with our own risk management team to determine what happened and identify any corrective actions. We will share more details as they are known.

“We are grateful to our employees, first responders and safety forces responding to this incident.”

Lubrizol Corporation is a Berkshire Hathaway Company that owns and operates more than 100 manufacturing facilities, sales and technical offices around the world and has approximately 8,800 employees.

The Illinois State Emergency Operations Center in Springfield was activated, and members of the Illinois National Guard and mobile response vehicles were dispatched to the area.

“I am monitoring this situation closely and will make all resources available to the surrounding communities as we work to keep people safe,” the governor said in a news release.

Among the responding agencies were the Rockford Fire Department, which sent its hazardous materials team to conduct an air quality analysis.

“At this point in time there is no danger to air quality at ground level,” Wilson said.

“We are first and foremost focused on life safety in addressing concerns to make sure we mitigate the current existing conditions,” Winnebago County Public Health Administrator Sandra Martell said at a Monday evening news conference.

Martell urged those living within three miles of the plant to wear a mask or face covering when outdoors.

The Winnebago County Emergency Operations Center also is tracking the smoke plume and wind direction. The specific area impacted at this time is two miles south of Chemtool.

While residents within one mile of the plant have been asked to evacuate, residents two miles directly south of Chemtool are asked to stay indoors as a precaution, close windows and doors, and turn off air conditioner/HVAC units.

State health officials also are recommending that residents within the one-mile evacuation zone wear masks or face coverings until further notice to prevent the inhalation of soot.

Wilson said the Chemtool plant is no longer standing, but the fire is far from over.

“We are thinking that this is going to be a several-day event to have all this product burned off,” Wilson said. “That’s the best thing that we can do right now.”

Out of concern for the environment, Wilson said firefighters stopped streaming water onto the blaze.

“The Rock River, which is a very large waterway, is about 300 meters to the west of this location,” he said. “So, that’s one thing we are definitely concerned about, and that’s product runoff into the river.”

Rockton Village President John Peterson said Chemtool has been a vital part of the village for more than a decade.

“They’ve been good partners with our village since they got here,” he said. “They’re a good employer, and they have always been supportive of the village.”

Peterson called the loss of the Chemtool building, its operations and possibly jobs “a shame.”

“It’s still too early to talk about what is going to happen next,” he said.

The Chemtool plant on Prairie Hill Road is a production center.