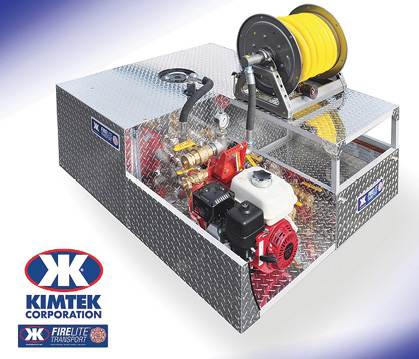 KIMTEK celebrated its 35th anniversary by introducing the FIRELITE® FHR-205, a new version of its popular FIRELITE® series skid units for use with utility task vehicles (UTVs). Distinct from KIMTEK’s patient transport units in the FIRELITE series, the FHR-205 skid unit positions the hose reel to wind off to the rear. Constructed of KIMTEK’s signature rugged, high-quality aluminum diamond plate and tubing, FHR-205 skid units have positioned the Hannay 4000 Series manual reel to face rearward, winding off to the rear rather than to the side. FHR-205 units also come with a hose storage area with tailgate adjacent to the pump and a Darley-Davey pump. Founded in 1984 as a research and development company dedicated to advances in life safety technology for the fire sciences, KIMTEK Corporation manufactures and markets a full line of FIRELITE and MEDLITE transport skid units for emergency service UTVs and pickup trucks. www.kimtekresearch.com.

SAFE FLEET’s Fire, EMS, and Industrial sales team promoted several employees. Jason Witmier and Andy Plofkin have been promoted to National Account Managers. Jerry Herbst has been promoted to National Account Manager for Elkhart Brass Municipal Products, while Peter Luhrs has been promoted to Vice President of Product Management. In their new roles, they will be responsible for further developing strategic and tactical sales initiatives to expand FRC, Elkhart Brass, FoamPro, and ROM presence in the U.S. Each will continue to focus on the Safe Fleet Fire, EMS, and Industrial Market brands: FRC, Elkhart Brass, FoamPro, and ROM. Their efforts will continue to concentrate on customer development and sales growth responsibilities for each of their assigned territories. www.safefleet.net.

THE INTERNATIONAL ASSOCIATION OF FIRE CHIEFS (IAFC), in partnership with PIERCE MANUFACTURING, announced Vienna (VA) Volunteer Fire Department (VVFD) Chief John Morrison (Volunteer Fire Chief) and Ankeny (IA) Fire Department (AFD) Chief James Clack (Career Fire Chief) as its 2019 IAFC Fire Chief of the Year award winners. Morrison began volunteering with the VVFD at 16 years old, quickly becoming an emergency medical technician. His most notable accomplishments include serving as a planning section chief for the Fairfax County (VA) Urban Search and Rescue Team (Virginia Task Force 1) and for developing and managing a Web-based portal that has been cited as a best practice in numerous FEMA and international audits. Clack, a 33-year fire service veteran, began his career as a rookie firefighter in 1986 at Station 6 with the Minneapolis (MN) Fire Department (MFD), moving up the ranks to become MFD chief in 2006. He served as the unified incident commander for the Interstate 35W Bridge collapse over the Mississippi River in downtown Minneapolis. Most recently, Clack was sworn in as AFD chief in 2014. While serving as chief of the Baltimore City (MD) Fire Department, he reestablished a nonprofit foundation to financially help firefighters and their families who were hurt in the line of duty and made Baltimore the largest city in the U.S. to require residential sprinkler systems in single-family dwellings. www.iafc.org. www.piercemfg.com.

BRYAN FASS, a renowned fitness author and speaker in the fire and emergency medical services world, died at his North Carolina home on September 16. He was 46 years old. Known as a leading expert on public safety injury prevention, Fass wrote for Fire Engineering and JEMS and was a presenter at FDIC International and EMS Today. Additionally, his company Fit Responder worked with departments around the nation to reduce injuries and improve fitness for first responders. Fass earned a bachelor’s degree in sports medicine and had more than 17 years of clinical practice, was a paramedic for more than eight years, and was certified athletic trainer and strength coach.

JOSEPH RODONDI was named the new chief of the Lebanon (OR) Fire District. Rodondi will replace previous chief Gordon Sletmoe, who retired in May after 37 years as a firefighter. Sletmoe will remain with the department through December to assist Rodondi with his transition to chief. Rodondi has more than 30 years of fire service experience. He served with the Livermore-Pleasanton Fire Department in California from 1997 to 2015, beginning as a firefighter/paramedic and working his way up the ranks, serving as a fire engineer, captain, battalion chief, and deputy fire chief from 2010 to 2015, when he retired as the department’s deputy chief and acting chief.

DILLARD EDWARD FERGUSON JR. was sworn in as the new chief of Goochland County (VA) Fire-Rescue and Emergency Services (GCFRES). Ferguson has worked in fire and emergency medical services (EMS) for the past 37 years. He started as a volunteer with GCFRES at age 16 and served for almost 17 years as a career firefighter-paramedic with Chesterfield (VA) Fire and EMS. Ferguson Jr. has also served as a flight paramedic assigned to VA State Police Med-Flight 1; an advanced life support field training officer; and a member of the hazardous materials and technical rescue teams, among many other positions.

JEFF BOYLES was sworn in as the new chief of the Newport Beach (CA) Fire Department (NBFD) on August 21. He was previously the NBFD’s assistant chief for operations. Boyles now leads Newport’s eight fire stations, 114 firefighters, and 13 full-time lifeguards after almost 20 years of climbing the ranks. Boyles takes over for Chip Duncan, who retired in July. Boyles joined the fire service in 1994 and the NBFD in 2000. Before getting into top administration, he was a firefighter and paramedic, an arson investigator, a training chief, and a battalion chief.

Polaris Leads the Off-Road Industry into the Future, Taking UTV Performance & Productivity to the Next Level with the All-New, All-Electric RANGER XP Kinetic